By Richard Lynch on December 13, 2018@richanthon 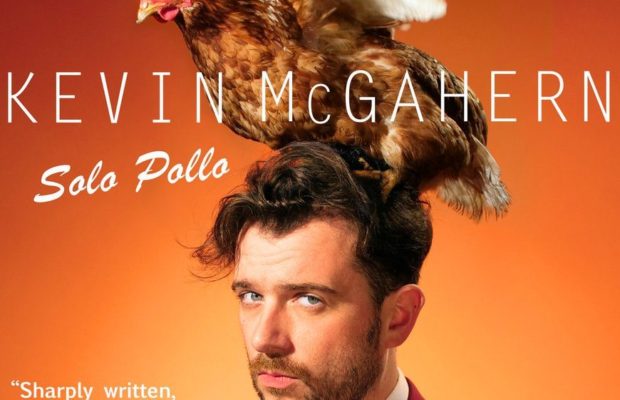 The star of RTE’s Republic of Telly brings his brand new show to  Dolans, Limerick on January 19, 2019. With the Solo Pollo Tour, the silver-tongued Cavan native promises a mix of traditional stand-up, character-based comedy and lovely funny songs. Kevin McGahern talks about his first year of marriage, dying with flatmates, avoiding getting shot in America, how to get away with drunk driving and how to survive a terrorist attack.

Originally from Cavan, Kevin first began performing stand up in 2009 before joining the popular television series The Hardy Bucks on RTÉ 2 as Simcard. After featuring in a number of sketches on the show, Kevin took over as host of Republic of Telly, initially alongside Bernard O’Shea and Jennifer Maguire before flying solo in 2015.

Kevin’s laid-back, straight-faced delivery elevates the absurdity of his subject matter in his own entirely unique way.

As well as being a regular in the top Irish comedy clubs, in particular, the Laughter Lounge, he has performed in a number of festivals including the Vodafone Comedy Festival, Galway Comedy Carnival, Body and Soul, Electric Picnic, Forbidden Fruit and at the Edinburgh Fringe.

In 2013, he toured with his show 2 Grown Men alongside fellow comedian Edwin Sammon. 2019 will see him tour Ireland with his solo show, Solo Pollo.

He presented the documentary Kevin McGahern’s Fast & Furious for RTÉ in 2015. His laid-back style was praised for his open-mindedness and sense of curiosity. Following on from this, he presented a three-part series in 2016 for RTÉ called Kevin McGahern’s America.

Kevin played the role of Ed in Amy Huberman’s series Finding Joy on RTÉOne and has featured in the films Flat Lake (2013) and Portrait of a Zombie(2012). He also co-wrote the play The Devil’s Céilí with Philip Doherty, which won Best Play at the All Ireland Drama Festival in 2014. He plays the lead role in No Party For Billy Burns (2017).

Tickets for Kevin McGahern are from €14 on sale now from here.