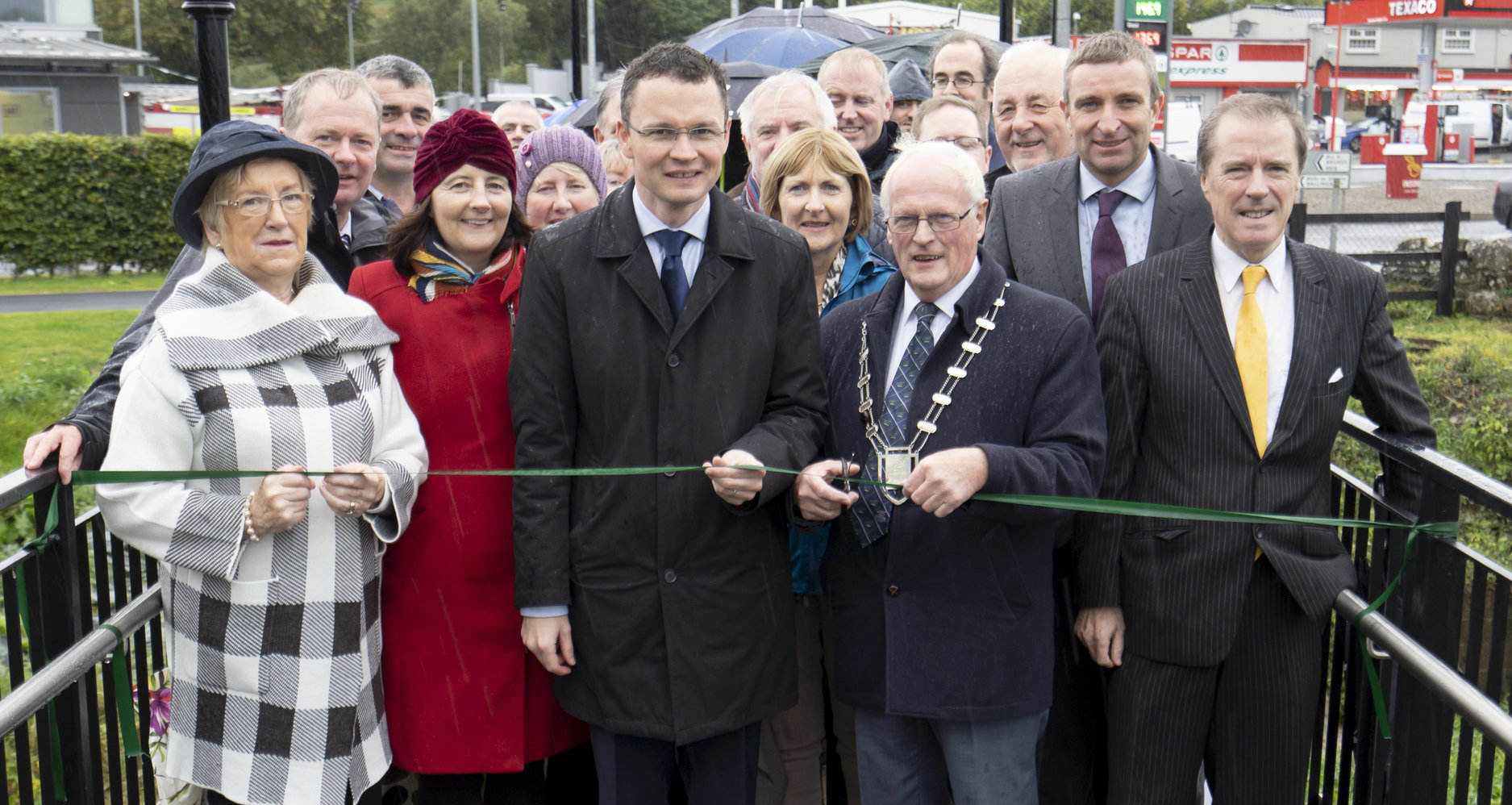 Kilmallock Town Wall walkway opens to the public. Cathaoirleach of the Cappamore-Kilmallock Municipal District Cllr Eddie Ryan and Minister of State at the Department of Finance and Public Expenditure and Reform Patrick O’Donovan TD who performed the official openings of The West Wall Walkway and The New Footbridge in Kilmallock. Picture: Don Moloney

Parts of the historic Kilmallock Town Wall are visible again for the first time in generations following the completion of the Kilmallock West Wall Walkway project.

Limerick City and County Council has led a project to conserve more than 500 metres of the Kilmallock Town Wall and create a walkway along the route, allowing locals and visitors alike to experience the wall for the first time, as up until now as the wall had been on private property.

Kilmallock was an important Norman town and was at the centre of Ireland’s political development from the 13th through to the 17th centuries, a history that is evident through the rich architectural heritage and national monuments around the town.

The original circuit of the town’s defences was 1,700 metres and of this, about 1,200 metres remains standing.

Elsewhere the Kilmallock Town Wall is still represented by a boundary wall and everywhere it still serves as a boundary so that even a casual glance at a modern map reveals the line of the medieval defences.

In addition, there are a further four National Monuments in State ownership, King’s Castle (15th century) which stands astride the main street, The Stone Mansion (16th century), The Collegiate Church (13th century, with an earlier round tower) and the Dominican Priory (late 13th century).

What makes this project unique is that visitors to the West Wall Walkway will be seeing the same landscape as those centuries ago, as Kilmallock has never really expanded outside its original walled boundary.

In addition to the West Kilmallock Town Wall Walkway, a new pedestrian bridge in the town has been officially opened.  It is located immediately downstream of the existing road bridge on the Limerick Road close to the Fire Station.

The new bridge provides a dedicated crossing point for pedestrians over the beautiful River Loobagh at the entrance to Kilmallock. It provides a greatly improved link from the town and hugely increased safety to the recently developed Riverside Walk.

The bridge is 28 metres in length with a two-metre wide hardwood timber deck and has been designed to complement its surroundings. It and approach footpaths have been provided with energy efficient, architectural lighting.

Cathaoirleach of the Cappamore-Kilmallock Municipal District Cllr Eddie Ryan and Minister of State at the Department of Finance and Public Expenditure and Reform Patrick O’Donovan TD who performed the official openings of The West Wall Walkway and The New Footbridge in Kilmallock. Picture: Don Moloney

The bridge and the walkway are part of a larger plan by Limerick City and County Council that will provide a series of linked walks in and around Kilmallock.

The overall costs of the West Wall Walkway and the Footbridge amounted to almost €900,000, with funding from the Department of Culture, Heritage and the Gaeltacht, the Irish Walled Towns Network, Rural Economic Development Zone, Hinterland, and Limerick City and County Council own funds.

Kilmallock is ideally situated to build on the attractiveness of Ballyhoura Country, to entice more people who enjoy adventuring to come here, while it also is a hugely attractive destination for heritage tourism.

Speaking at the official launch in the Deebert Hotel, Cathaoirleach of the Cappamore-Kilmallock Municipal District Cllr Eddie Ryan said: “Kilmallock has a long and rich history and today we see that history becoming more accessible to a lot more people with the official opening of the West Wall Walkway.”

“The West Wall Walkway we are opening today is just under 500 metres in length, and is set to become a new thoroughfare for Kilmallock, providing a wonderful amenity to residents and visitors alike.”

“Funding from various sources including the Irish Walled Towns Network, Rural Economic Development Zones, The Historic Towns Initiative along with matching and additional funding from Limerick City and County Council over the years has made today a reality.”

“The people of Kilmallock value their heritage and know that it makes the town unique, beautiful and magical and the town wall is central to that vision.”

Minister of State at the Department of Finance and Public Expenditure and Reform Patrick O’Donovan TD said: “This is a great day for Kilmallock, especially for the people of the town and surrounding areas.  Over the past number of years, there has been a massive metamorphosis in Kilmallock, with a huge amount of projects finished or nearing completion.  The ideas have come from the bottom up and facilitated by the government.  There has been a new fire station, courthouse, library, new primary and secondary schools, sewerage treatment plant and now a new pedestrian bridge and a new walkway by the wall.

“There is more to be done such as with the medieval mansion in the town.  I know the contribution that building can make into the future, as much as it made in the past.  Over the last number of years, we have been developing a rural strategy for our towns and villages and it is out of that that some funding will be secured for projects in Kilmallock.”

Sean Coughlan, Director of Support Services with Limerick City and County Council and Area Manager for Cappamore-Kilmallock added: “It is a great source of pride to see the completion of the bridge, the walkway and the restoration of the West Wall.  And there is a pipeline of other projects for Kilmallock, such as the Stone Mansion and the East Wall.”

“The projects show the important engagement that goes on between Limerick City and County Council, Kilmallock Tourism, the local community and the local development company Ballyhoura, to bring these projects to fruition.”

“I would like to mention Limerick City and County Council’s architect Sarah McCutcheon, whose passion and drive to have the walls of Kilmallock preserved for generations to come has almost singlehandedly guaranteed the completion of the project.”

People of Munster are encouraged to Reuse at Home, at Work and at Play this October for National Reuse Month