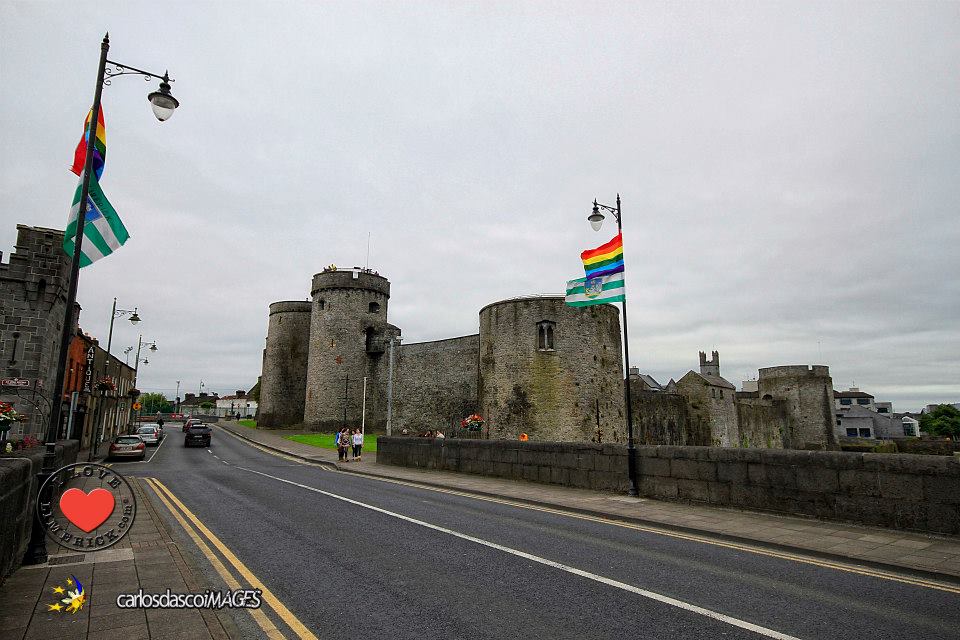 National and international visitors will enjoy a brand new castle experience that brings together the Castle’s remarkable history and archaeology through 21st century technology to create a new journey of discovery into the history of Limerick and King John’s Castle.

“We like to think of it as a time-travel experience which uses the latest technology to give people a unique opportunity to explore Limerick and the Castle as never before. It is an exciting ultra modern visitor experience with a dramatic history of over 800 years of stories. There is a stunning ‘looking glass’ exhibition area which provides a window to the past. Here people can walk through the historical exhibitions with people outside able to look in and people inside will be able to look out,” says John Ruddle, Chief Executive, Shannon Heritage, who will managing the new castle attraction.

Touch screen technology connects visitors to exciting tales of siege and warfare. A dazzling array of computer generated imagery, animations and ghostly projections are all part of this remarkable experience. Its cutting-edge audio visuals and 3D models all combine to help visitors delve into the Castle’s history. Discovery drawers unveiling castle treasure,  a cannon game, a treasure hunt and a Siege street in the castle courtyard are just a few of the surprises which visitors can expect. They can try on historic costumes – 18th century dresses or chainmail tunics. There is something here for everyone to enjoy!

Costumed characters will roam the site bringing history to life. On their journey through the exhibition, visitors will meet Nicholas the Master Mason, a lively character who may even share some of the valuable secrets of his trade, or indeed set you to work! Among the other array of colourful characters are Willem the cheerful Moneyer (King John’s Castle had its own mint), and the grim Constable Roger De Lees.

In the castle courtyard visitors will get a sense of the bustling activity that took place here including the blacksmith’s workshop complete with tools and weapons. Visitors can explore the Norman medieval campaign tent and the walkway in the remains of the Great Hall of the castle built circa 1280. They can step into the sanctuary of the chapel to take a quiet moment. Each of the castle towers has been dressed to re-create the daily operation of a busy military castle, complete with armoury and mint.

Treasures uncovered at the Castle during a series of archaeological digs, which began in early 1990, will be on display. Among these is a pistol dating from the famous 1642 siege period at the castle. It was dropped and left behind during hand to hand combat at the castle and a written record from the time has allowed archaeologists to accurately date the event to the 17th June 1642.

Another prized find is a gold stirrup ring dating from the mid to late 13th century, found during excavations of the Great Hall under the castle courtyard and thought to have ecclesiastical connections. The Great Hall has been made accessible to the public for the first time, with a specially constructed stairway leading people down into the chamber with spectacular views of the river from its windows.

New areas of the Castle, previously inaccessible to the public, have been opened up. These include a tower which affords the highest observation point in Limerick of the majestic Shannon and reveals breathtaking panoramic views of Limerick and its surrounding counties. The Castle also contains a specially designed education room complete with AV to allow school groups to experience and learn.

The redevelopment project was undertaken by L & M Keating Ltd, Kilmihil, Co Clare, the main contractor for the construction element of the project. 80 jobs were created during the design and construction phase of the project and a further 18 jobs have been created from the day to day operation of the exhibition.

Tandem Design, from Co Down created the exciting interactive exhibition.  Tandem Design has considerable experience in this field and was part of the design team for the acclaimed Titanic Centre in Belfast.

“King John’s Castle is a wonderful family attraction with something for children and adults. Visitors can expect to spend up to 3 hours exploring the rich stories the castle has to offer. We are delighted that our new visitor experience is ready for Limerick City of Culture 2014. We are planning an official launch later in the year, but our job now will be to unveil the tourism product to the national and international tourism trade,” said Mr. Ruddle.

The Castle will be open all year round (closing for 3 days over the Christmas period).  Admission prices are being held at 2012 rates – adults €9.00; seniors €6.65; children under 5 will have free admission; family rate (2 adults and 2 children) €20.60; (2 adults and up to 6 children) €23.50. Tickets can be purchased at the site or booked online at the newly revamped Shannon Heritage website www.shannonheritage.com.

Photos by Carlos Dasco for WWW.ILOVELIMERICK.COM. STANDARD DISCLAIMER – Sharing of images online by Carlos Dasco in no way licences the use of said images without the express agreement from Carlos Dasco or representatives.