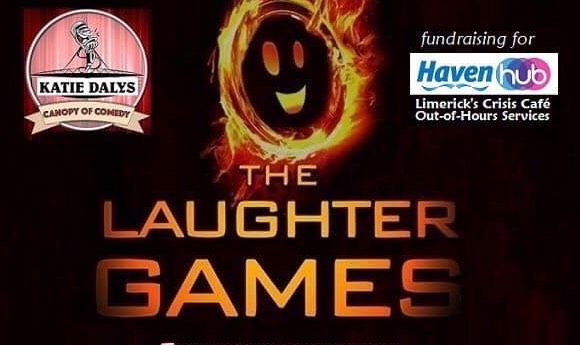 Winter may be coming, but the heat will be on in November for the Return of The Laughter Games in aid of Haven Hub, Limerick

Audience attendance and support on the night welcomed! We will also be raising funds on the night to support The Haven Hub, a much-needed project to bring an Out-of-Hours Crisis Café to Limerick City.

The Haven Hub project – which aims to open next month in Limerick City and will provide an out-of-hours safe space for those in crisis / distress and overall provide a safe space for those suffering mental health issues, via trained volunteers will open its doors by end of November at Limerick Social Service Centre.
The doors will open at 19:00 and the heats will begin at 20:00. Tickets available for only €4 online or €5 on the door.

(€4 on door with valid student ID)

The first round is split into four / heats in November. There are up to eight+ comedians in each heat. In each heat, comedians are paired off and go head to head against each other performing 5 minutes of material. The winner of each pairing is decided by a panel of our three judges and announced before the next pair compete.

The comedians are scored on a scale of 1-10 for stage presence, originality, and audience reaction. Judges’ scores are averaged then to deem the winner! (The judges’ decision is final and no correspondence will be entered into by the judges in relation to that decision)
All entrants must be available to compete on 30th November, if they progress to the final heat.

May the Best Comic Win!