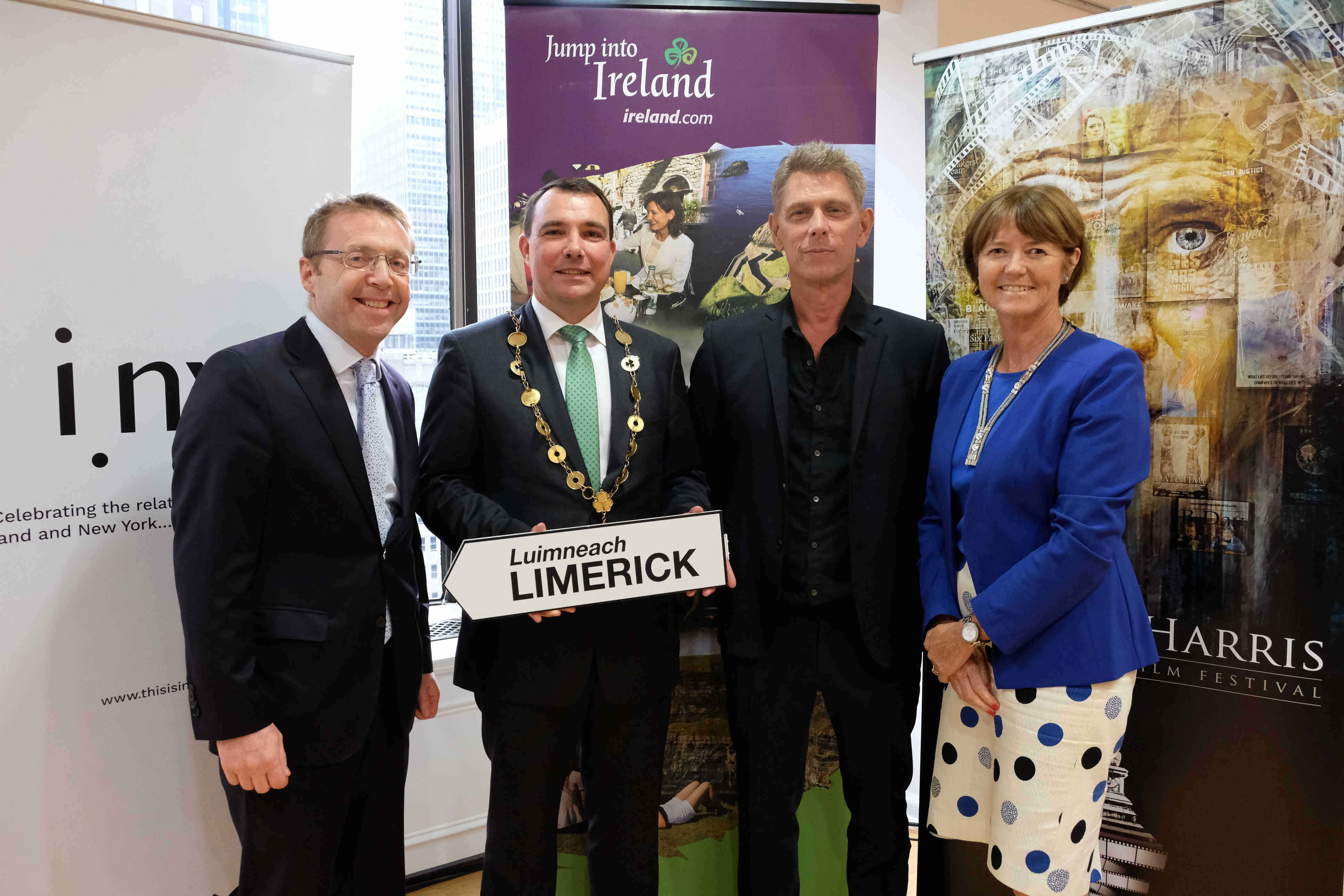 The new Global Irish Festival Series was launched in the United States yesterday (6 September), at an event organised by Tourism Ireland in New York in partnership with the Consulate General of Ireland. Singer Lisa Hannigan took to the stage, to launch events that will take place in the US and Ireland, to encourage our diaspora to return home to visit Ireland. Councillor James Collins, Mayor of the City and County of Limerick was in attendance representing Limerick at the event.

Around 34 million Americans claim Irish heritage – so this new initiative is designed to encourage people with Irish roots, and those who simply enjoy Irish culture, to come home and celebrate what it means to be Irish. The Global Irish Festival Series is a joint initiative between the Department of Foreign Affairs and Trade and Fáilte Ireland. It will be piloted in Limerick and Donegal this October; events will include the Richard Harris International Film festival and I.NY, which explores the breadth and depth of the connection between Ireland and New York.

Alison Metcalfe, Tourism Ireland’s Head of North America, said “We are delighted to join with Consul General Ciaran Madden and our colleagues from Fáilte Ireland, to launch this exciting new Irish cultural offering. The links between Ireland and the US are strong and we hope these new festivals will encourage more Americans to visit the island of Ireland.

“It has never been easier to get to Ireland and the Global Festival Series is yet another great reason to make the trip. Last year we welcomed a record 1.83 million visitors from North America to the island of Ireland. And, the growth momentum continues in 2018, with an increase of +11% in visitors for the January to June period. We are confident that our strategy for growth and extensive marketing programme, combined with more airline seats than ever before and the superb vacation experience on offer in Ireland, will deliver further record growth this year and into 2019.”

Irish Consul General Ciaran Madden said: “The Global Irish Festival series offers a wonderful opportunity for all of us to celebrate what it means to be Irish – whether that is by attending the great events here in the US or, even better, by making the trip to Ireland. Culture is an enormous part of Irish identity and the projection of that identity globally. As a nation, we are renowned for our writers, actors and artists, so what better way to connect with the warm heart of Ireland than by attending some of these festivals to enjoy the very finest traditional and contemporary culture and heritage that Ireland has to offer.”

Ciara Sugrue, Fáilte Ireland’s Head of Festivals, said: “The Global Irish Festival Series is a very exciting initiative and we are delighted to work with the Department of Foreign Affairs and Trade to motivate diaspora to reconnect by visiting their home county. The festivals and events supported through the series will help drive tourism to specific locations, including regional areas outside of current hotspots, creating new economic benefits for local communities. As these events take place in the ‘shoulder seasons’ each side of summer, they will also help tourism operators to trade for longer.”

Elemental Presents returns to Limerick for a weekend of great events