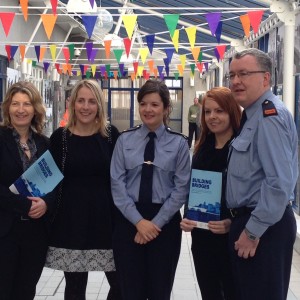 Gieran was joined by the Dean of UCC Law and Director of UCC’s Child Law Clinic Professor Ursula Kilkenny, who commented on the findings of the report. Also in attendance was Mayor of Limerick City and County Council, Cllr. Kevin Sheehan

The study found significant benefits not only for young people but also for the families and the victims of crime.  Young people displayed a significant increase in their levels of empathy towards victims after engaging with the project, as well as reporting better family relationships and less contact with the Gardaí and court system. Parents reported positive outcomes for family life and improved relationships.

This is a landmark piece of research in relation to applying Restorative Justice Approaches to youth offending in the Republic of Ireland.

Also at the seminar Le Chéile’s ‘Restorative Heart,’ was presented to Limerick City Council. The heart had travelled around Limerick city and was hosted by a number of projects in the community, voluntary and statutory sectors.

Victims of crime found that restorative justice (RJ) was a far better experience than the traditional criminal justice system.   They stated that in participating with the RJ Project they had a meaningful voice and found it to be a more respectful and inclusive approach that the traditional court process.

The study was carried out by Quality Matters who commented that:

“The project displayed value for money.  It was found that for every euro invested in the project over €2.80 of value was generated.  Much of this value was due to the reduction in criminal behaviour which resulted from young people engaging in the project.”

The project, established in 2010, works with young people on probation using a range of RJ models including face-to-face meetings, proxy victims, victim empathy programmes, and reparation.  The RJ project is part of Le Chéile Mentoring & Youth Justice Support Services, which provides volunteer mentoring as well as RJ, and family support services to young people who offend.

The report and more information on Le Chéile can be found at their site here.

You can Also find them on their Facebook here and their Twitter here.
If you would like to read more on the Youth of Limerick you can Check it out here