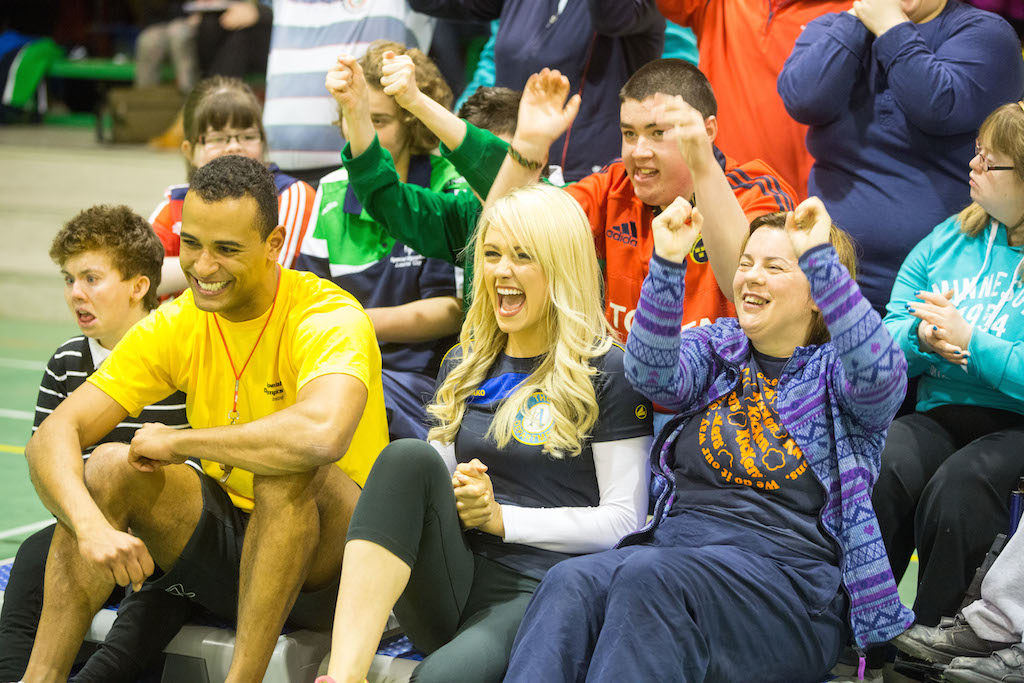 1,500 ATHLETES GEARING UP FOR THE BIGGEST SPORTING EVENT IN IRELAND THIS SUMMER.

At the Special Olympics games video shoot for I Love Limerick Richard joins Leanne Moore and Kamal Ibrahim as they work out the the athletes in the University of Limerick and Lisnagry. Pic Sean Curtin Photo.

WITH the countdown to the 2014 Special Olympics Ireland Games well underway, athletes in the host city of Limerick have received a surprise visit from some well-known faces.

RTE presenter Kamal Ibrahim and TV3’s Expose star Leanne Moore – both of whom are from Limerick – paid a visit to some of Ireland’s hardest working athletes to help out at a Games training session.

The athletes from Lisnagry Special Olympics Club in Annacotty, Limerick were treated to some top fitness tips from former Mr World, Kamal, as well as dietary and nutrition advice from Leanne. The session was a great success with athletes, including ‘Face of the Games’ athlete, Christine Delaney getting full value from their time with Kamal and Leanne both of whom are fitness fanatics.

Kamal – who recently ran the Great Limerick Run in aid of Special Olympics Ireland – said he was delighted to have taken part in the video which was filmed by local videographer Shane Serrano and produced by Richard Lynch from I Love Limerick.

‘The 2014 Special Olympics Games are probably the most important sporting event to take place in Ireland this year,’ said Kamal. ‘These athletes are inspiring and deserve all of our support in their efforts. I for one know where I will be June 12th to 15th. Cheering on these athletes.’

Leanne also paid tribute to the 1,500 athletes attending the Games and said she was proud that her native city was hosting the Games for a second time with Limerick also being the location for the 2010 Games. ‘I think the people of Limerick have really got into this event and will be out in force to support all the athletes next month.’

There is not less than 30 days until the Games kick off. There will be an Opening Ceremony in Limerick on Thursday 12th of June with the sporting activity commencing the next day.

The 2014 Special Olympics Games will be one of the biggest sporting events in Ireland this year with 1,500 athletes competing in 13 sports over three days of competition. They will be supported in their efforts by 3000 volunteers, many of whom come from the Munster region.