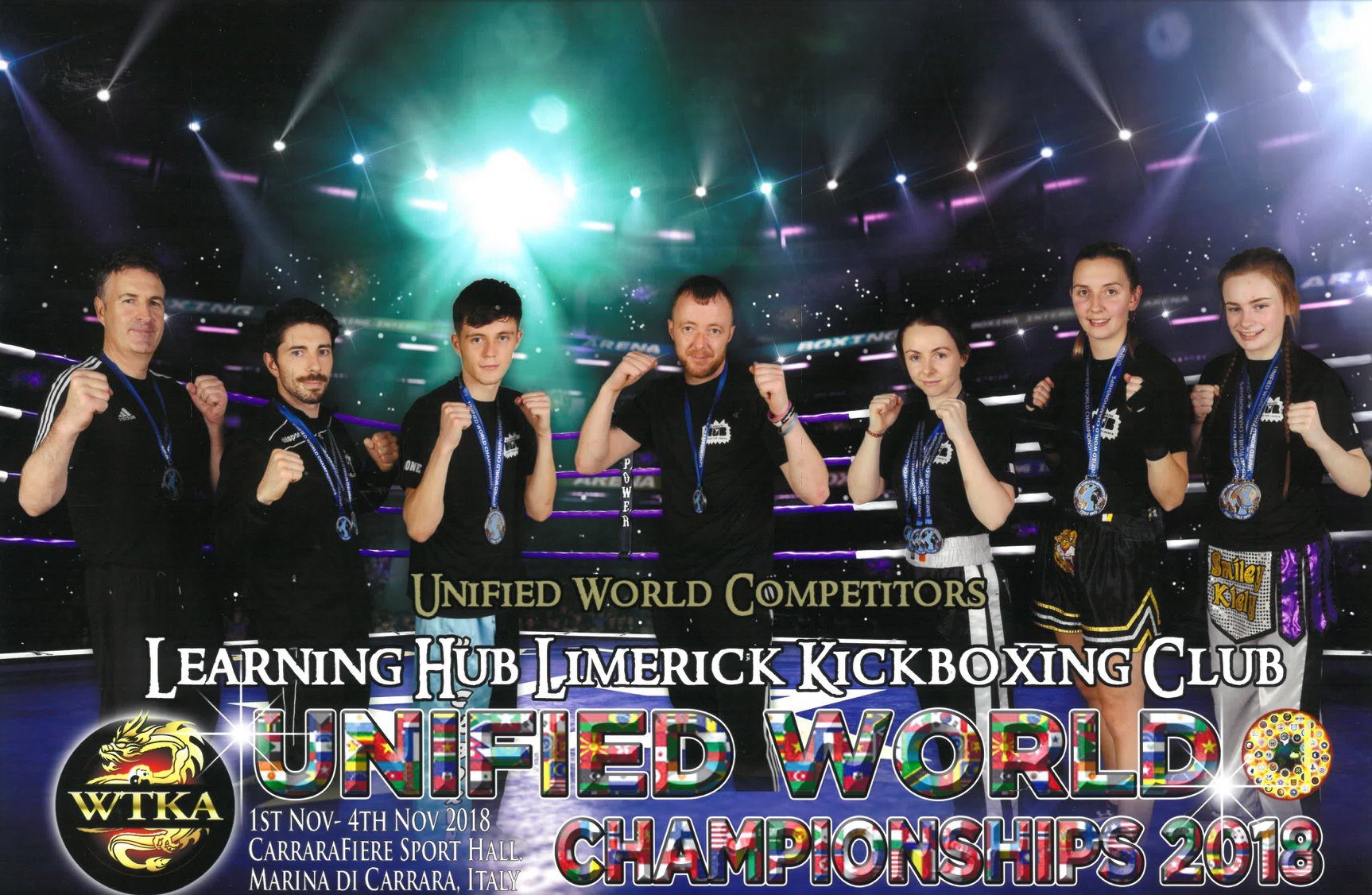 Learning Hub Limerick Kickboxing Club was represented by seven talented people at the The Unified World Championships for kickboxing. The participants made their country proud and bagged 12 medals.

The Unified World Championships for kickboxing took place in Carrara, Italy from November 1st to the 4th, 2018. Seven talented and worthy competitors from the Learning Hub Limerick Kickboxing Club took on this incredible journey and represented Ireland at the Championship.

The Championship saw over 28 International Federations and 5,000 athletes participate in what was an incredible and competitive event. The seven representatives from the Learning Hub Limerick Kickboxing Club took on the challenge and did their country more than proud.

Tyrone Cronin O’Brien, a first-year student at LIT, also claimed a Gold medal and became a full contact kickboxing champion of the world. Robert Maloney and Michelle Fitzgerald both had the performances of their lives to clinch a Gold medal apiece. Liam Purcell, Sarah Howard and Paul O’Brien (who traveled as both coach and competitor) all gave their utmost and did very well to take Silver medals.

All seven athletes represented the Learning Hub Limerick Kickboxing Club, which welcomes everyone regardless of age or experience. Classes take place on a daily basis at the Club’s gym in Kileely, on the north side of Limerick city.

Open to one and all, the Learning Hub Kickboxing Club has a diverse group of people united by their interest in the sport.

The Learning Hub has been running in Kileely for the last 11 years, encouraging young people and families to continue getting the most from education and reach their full potential.

Since its inception 9 years ago by Paul O’Brien the Learning Hub Kickboxing Club has grown immensely. Initially aimed towards children the club soon received interests in parents and young people who began to enquire about classes for themselves.

The club now runs different classes for children as young as five-year-olds up to adults in a variety of kickboxing disciplines and several, fitness, health and well-being programmes.

The gym had to be expanded to accommodate the increasing demand in the community. Many of the young people who grew up in the kickboxing club have gone on to become champions, some are coaches and instructors, all are positive role-models in their community. The club invites new members all the time operating an open-door policy, welcoming everyone who wants to work on their fitness or try their hand at kickboxing

For more stories on the Learning Hub go here