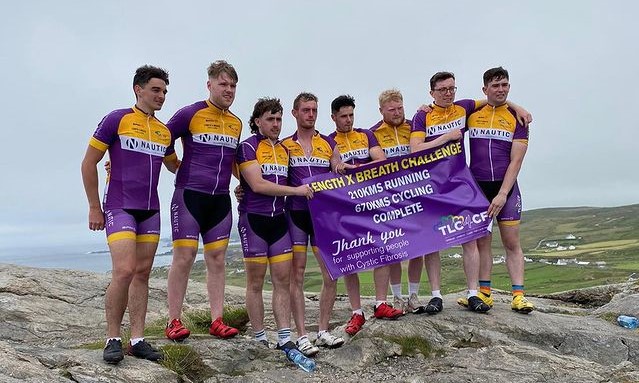 More than €50k has been raised by friends and family for Tipperary, Limerick Clare for Cystic Fibrosis (TLC4CF) in loving memory of Cathal Scanlon, from Ardare, who sadly passed away to Cystic Fibrosis in 2020.

A fundraising event for TLC4CF called the Length x Breath Challenge was held in Cathal’s honour and memory. It was a joint running and cycling challenge completed by a group of Cathal’s friends.

The Length x Breath Challenge took place from July 6 to July 15, where Cathal’s friend Paraic O’Neill successfully ran across the country from Galway Bay to Dublin in 5 days and was then joined by seven of Cathal’s other friends to complete a group cycle of 670km from Mizen Head to Malin Head.

Speaking on the challenge and in memory of his best friend Paraic said, “We have done it with him watching over us, probably laughing at us, he was the strongest young man I ever knew, never once complained about his condition and he must have been struggling, struggling through the simplest of things. Struggling just to breathe, so we had to think of a challenge, and it couldn’t be easy because his life wasn’t easy so we decided on the Length x Breath Challenge.”

And they've done it! Congratulations to all the #LengthxBreathChallenge cyclists for completing the 5 day Mizen -> Malin Head cycle this afternoon. What an achievement and you have raised so much awareness of CF throughout your journey. You should all be so proud! We are! pic.twitter.com/b0ToXH77Qt

The idea behind the challenge was to mix the pain which Cathal endured and suffered and his love of cycling. The challenge was completed in his honour and spanned the date that would have been Cathal’s birthday. The group did this challenge with their friends memory in their thoughts.

The money raised will make a huge difference to TLC4CF, which was founded in 2008 by a group of parents, including Cathal’s parents Sean and Carmel, who wanted to improve the cystic fibrosis services in the Midwest region of Ireland. Since that time, TLC4CF has successfully raised over €6 million to design and build a dedicated adult cystic fibrosis ward at University Hospital Limerick.

Cystic Fibrosis (CF) is an inherited genetic condition that primarily affects the lungs and digestive system. People with CF experience a build-up of thick sticky mucus in the lungs, digestive system and other organs, causing difficulty breathing.

The eight lads couldn’t have completed the challenge without a support team backing them every step of the way. More friends of Cathal and his family, particularly his brother Darragh, ensured all the eight had to worry about was running and cycling.

The group would also like to thank the Adare Cycling Club for their support, guidance and support cyclists who joined them on some of the journey through Limerick, as well as the local businesses who supported them with the event: Nautic (primary sponsor); Fitzgerald’s Woodlands House Hotel & Spa; Irish Wire Products; Cargill Animal Nutrition; Kirkland Investments; EM Services; Foynes Engineering; Grasslands Agro; Samco Agricultural; Londis Adare; Brodericks Spar; Houlihan Physiotherapy; The Physio Centre and generous donations made from anonymous businesses.

Donations can be given towards the challenge until Wednesday, September 1 HERE