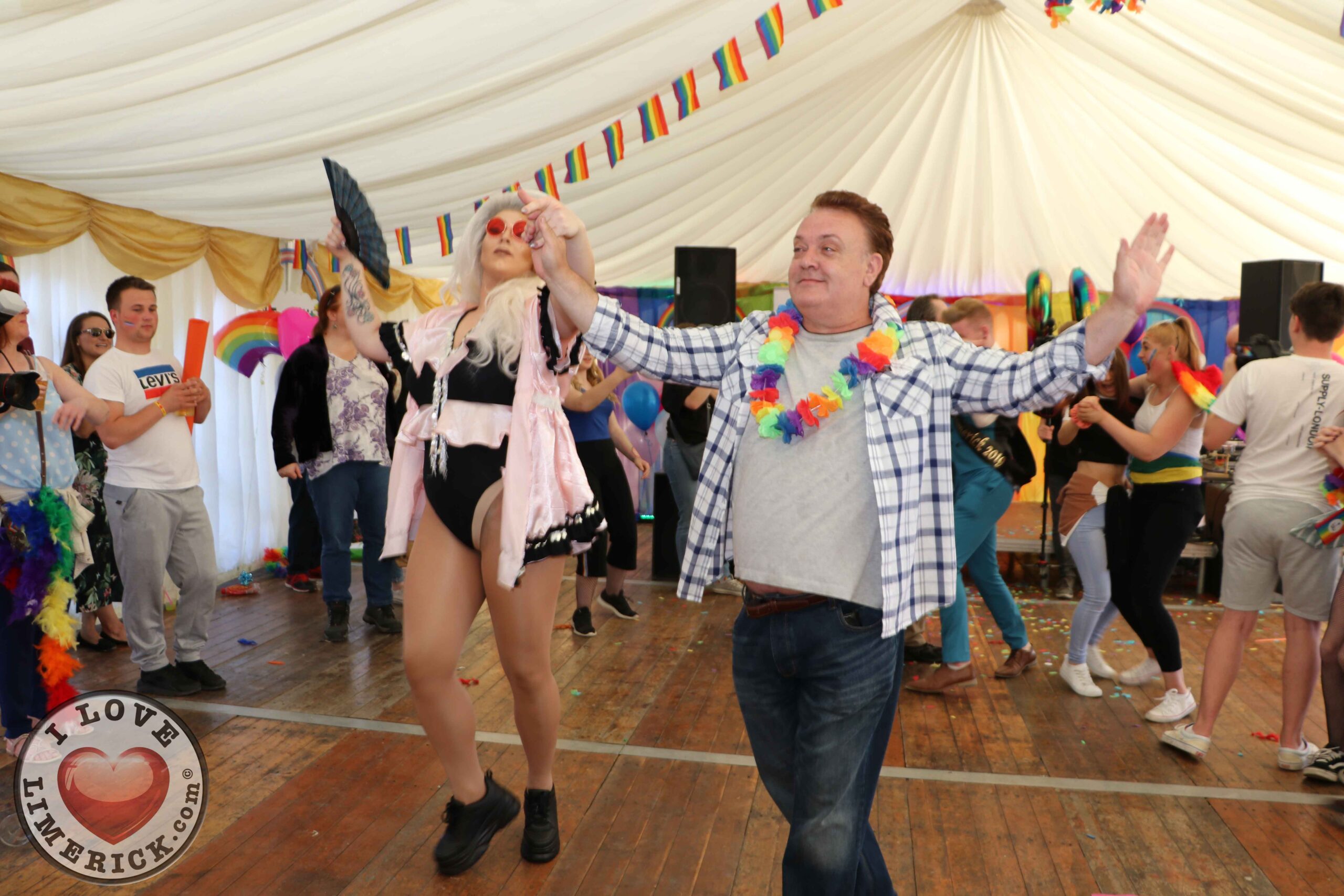 Leo Shine – Leo was a popular member of the LGBTQI community here in Limerick and never missed a Limerick Pride. Picture: ilovelimerick

There is huge sadness in Limerick following the passing of Leo Shine, beloved entertainer and LGBTI figurehead at the age of 60.

Leo Shine from Hyde Road, provided years of great entertainment to the people of Limerick, ‘The Entertainer’ as Leo was affectionately known was a much-loved character. The beloved son of the late Leo and Peggy will be sadly missed by his loving sisters Mona and Anne, brothers Liam, John, Michael, Gerry and Laurie, sisters-in-law, brother-in-law, nieces, nephews, grandnieces, grandnephews, relatives and his many friends.

Leo was a character about Limerick who brought warmth and good energy wherever he went. Many have taken to social media to pay tribute to him, remarking on his witty sense of humour and crediting him with being a trailblazer for gay people in Limerick.

Leo’s good friend of over 50 years Jim Lawless said, “He was such a phenomenal character. He was a natural on the stage. His greatest gift was that he could just walk into a room and light up the room with his body language and face language and his smile. God, he was a great entertainer. He loved to sing and he loved the Eurovision. He loved telling jokes, he was hilarious. I remember one Easter Sunday, Leo put up a post at one o clock saying, “It’s one o’clock and I can’t believe I have no Easter Eggs yet!” Then by four o clock, there were 26 eggs left outside his house. And Leo, being the generous and kind person he was, brought the eggs down to share with the local community. He loved to spread positivity around”.

“Every Sunday when we were younger, we would meet in the Railway bar across from the railway station from one to two o clock so anyone who wanted to meet their friends they could just drop in and there would be somebody there, and Leo would be there telling all his funny stories. He was also a hairdresser down on Thomas Street and he would tell us really funny stories from there. He could sing like a bird. Leo even made an appearance on the late late show! He was a great friend of Brendan Grace. He played all over Ireland. He’s friends with some of Ireland’s oldest drag queens, they loved him because he was very good to them and a great help when they were starting out,” Jim added.

One Limerick citizen said, “Such sad news today. A true Limerick icon. Leo Shine has passed away. To say we are all heartbroken is an understatement. You will be missed Leo. We will all miss your witty banter and wise crack jokes. You were one in a million”.

Limerick Treaty Suicide Prevention said, “You were a huge fan and support mechanism of Limerick Treaty Suicide Prevention and for that, we are eternally grateful. All of us here at LTSP are sorry to hear of the passing of Leo Shine. For those who may not know Leo, he was a huge part of our community here in Limerick over the years. He was generous, honest, welcoming and really was ‘The Entertainer’ he was known as”.

Rip to one of limerick’s stars ⭐️
Thank you for all the entertainment you gave limerick throughout your life ❤ you will be missed. Our condolences to your friends and family .Thank You for all the Happy Memories you gave us Leo Shine, you are a Limerick Icon ??️‍? pic.twitter.com/vcc0fd0cYH

Another Limerick citizen reminisces on Leo’s time as a performer in the Desmond Arms saying, “Great memories from Desmond Arms. You were the life and soul of everywhere you went, having us all up singing with you. We would all be shouting at you to play just one more song!”

On the day of his funeral, Limerick Pride wrote, “Today a true Limerick icon will make his final journey through the city, mass at 11am with a special tribute to Leo along Hyde road at 12.15 PM for everyone that can’t attend the mass to come out to show their respects.

“Leo paved the way for many of us here & was Limerick Pride. We will never forget all he has done, not only for the LGBT community here but the wider Limerick community”.

“Mr Showbiz, we are sure you will entertain them all over the rainbow with your jokes, humour, dancing & singing, thank you for everything you have done, all the memories you have given us, you will be greatly missed.”

Mark Hanley from UK said, “Today could not pass without a mention of this guy, Leo Shine. People in the UK won’t have heard of him but in my home town, he is a living legend and always will be! Back in the day, he was out and proud before being out was even a twinkle in the LGBT eye. The 70s and 80s was a very difficult time to be gay in Limerick, never mind Ireland [it was still illegal until the early 90s] but this guy paved the way for so many and is one of the reasons we have a Limerick Pride. A supremely talented singer, totally incorrigible, with a wit that could cut you to ribbons, totally spontaneous. My favourite quote is when someone waltzed past him on the way to the Ladies and he goes, “Love your dress, I used to have one of them when they were in fashion” Haha! There are a thousand and one womens hearts broken across Limerick tonight, FACT!! God rest you Leo, you feckin hero!! x”

Richard Lynch of I Love Limerick expressed his and the team’s sadness at Leo’s passing saying, “I have very fond memories of Leo singing songs at my parents’ pub ‘Erics’ over the years. Leo was one of the first gay people I ever knew in the city during the 70s when I was a young child. He was a beloved entertainer and very famous back in the day for his singing talents. He was also a beloved member of the LGBTQI community in Limerick and was an instantly recognisable face to all Limerick people. He will be sorely missed but never forgotten. The whole team at I Love Limerick send their condolences to his family at this sad time”.

The family request that only family flowers are to be given but anyone else who wishes to honour Leo can make a donation if desired to Cancer Research Ireland.

To donate to the Irish Cancer Society go HERE

Related Topics:Leo Shine
Up Next