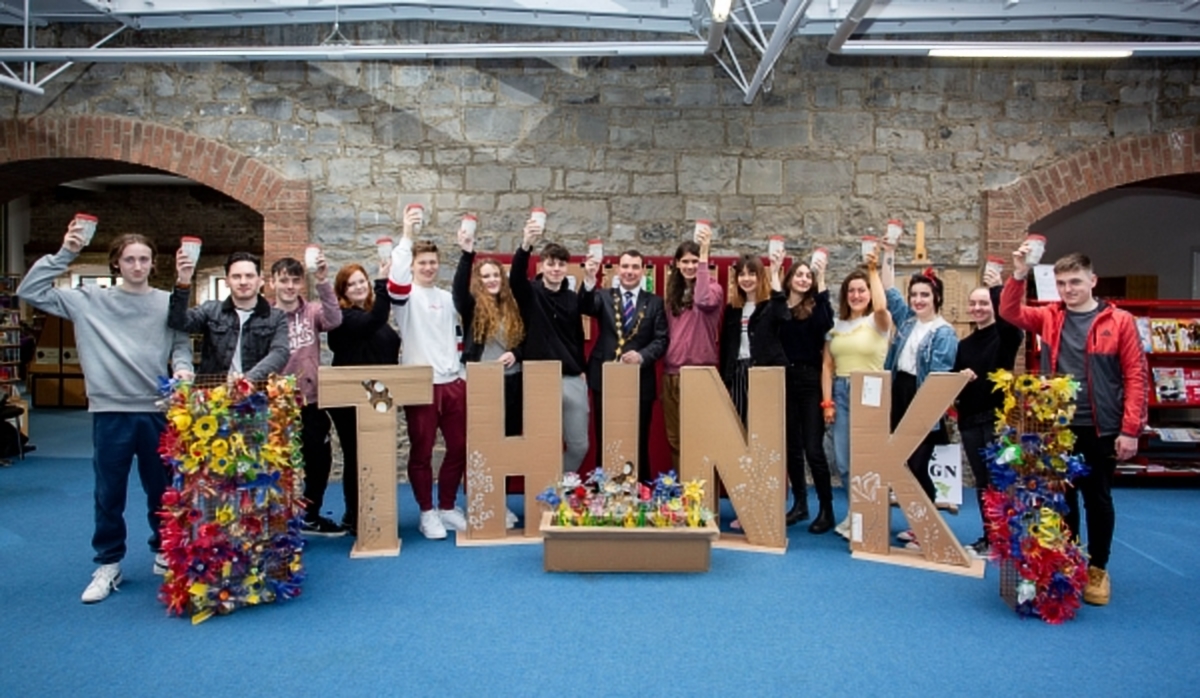 The people of Limerick are being asked to ‘THINK’ and take action on single-use disposable items.

A new exhibition has opened in Limerick Main Library at The Granary on Michael Street, which challenges all of us to think about recycling and the need to move towards multi-use items rather than continue our throw-away culture.

The ‘THINK’ campaign has been loaned to the Library by Limerick College of Further Education (LCFE).

LCFE wanted to implement a better, cleaner, greener environment and the AD2, Art & Design group was asked to help in promoting this message in an awareness-raising exercise and as a way of promoting a greener alternative for the college community.

The THINK project group focused their campaign on recycling and the increased use of single-use throwaway items such as coffee cups and plastic drink bottles.

Attending the launch of the Let’s ‘THINK’ at The Limerick City Library were, LCFE students, Mark Hassett and Erin Halpin with Mayor of Limerick City and County, Cllr. James Collins. Picture: Alan Place

Washed out coffee cups were used to reinforce the 3D ‘Think’ letters, which were used from recycling cardboard.  All the bottles that were collected were washed out, cut up, melted  down, spray painted and used to create flowers.

The posters were designed to be printed in black and white so as not to run down our colour inks, and they were mounted on recycled card.

Mayor of the City and County of Limerick Cllr James Collins said: “I would like to  compliment the students and staff in Limerick College of Further Education on Mulgrave Street   for highlighting the important issue of climate change and how we can do our bit to  help.”

“The quality of your work and research is of a very high standard and thank you for loaning your   exhibition for others to learn and affect change.”

“Climate change is one of the major issues affecting us globally, and we all have to play our part in changing our habits, such as moving to multi-use products.”

“Even now we are seeing changes of our climate and environment as a result of our actions.  The next generations will suffer the most from present-day actions, and I was delighted last week to support the students from schools across Limerick who protested against climate change last Friday. Their desire and passion to help the environment will pay off.”

Audrey Fitzgerald, Lecturer in the School of Creative Media & Visual Arts, Limerick College of Further Education, added: “Art is a superb medium to explore new ways to creatively interact with people.  In this installation, the art & design group were able to make a statement about an environmental issue that is becoming more pressing every day. The increased use of plastic and single-use throw away items is obvious all around us, and our own college environment was the perfect place to start.”

“The installation is made entirely from recycled material.  I felt very strongly that we only used materials that had a previous life.  That was our design challenge to make mundane waste into a visually pleasing piece.”

Sinead McDonnell, Environmental Awareness Officer with Limerick City and County Council, said: “Single-use plastic bottles take 450 years to biodegrade.  Disposable Coffee Cups are not recyclable.  Single-use is single use even if it is compostable.  Compostable single-use cups still become litter across our street towns and villages.  Like the message from this exhibition THINK about the thing that you can do to prevent litter and waste and help our environment.”

THINK continues until at The Granary Library until April before travelling to other Libraries across Limerick.