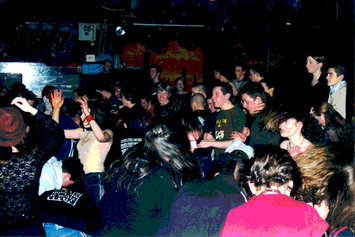 The first ever LEXES Night Club Charity Reunion is happening in Dolans Pub this Saturday 16th September and is dedicated to the memory of a very special lady. This is the first ever reunion of the iconic alternative Limerick club night from the early noughties.

Expect all the music that shaped a generation (Alt-Rock, Metal, Nu-Metal, Grunge, Pop- Punk) with the original DJ’s – Deadly Buzz, End/Fin/Dead, and Shocko. One special night with all proceeds being donated to the Be Well Team (Youth Mental Health Service as part of Limerick Youth Service).

The LEXES Night Club Charity Reunion event is being run in dedication to the memory of Cathy McMahon a remarkable young woman who passed away a few years ago.

Cathy’s mother Norma said that she was a very special woman who left a huge impact on people “I am really touched that her friends approached me to choose this charity in memory of Cathy. I really wanted to get involved in something related to mental health and particularly eating disorders. Cathy was sick for 11 years with an eating disorder, but I don’t want her to be remembered only for having anorexia because she was so much more than that. She was a fantastic personality, loving, giving and I know I am biased because I’m her mother but I know that that’s how a lot of people saw her.”

Norma went on to say “I don’t think she should have died of anorexia, nobody should but the care just isn’t there in this country. We had tried a lot of things but the mental health service in this country let us and Cathy down badly. People don’t want to talk about it but it’s a huge issue in this country. Even in hospitals here they treat it as if it is self-inflicted and there is very little empathy”.

Cathy’s friend John said “Cathy was the most confident, bold, loud, out-going, and definitely coolest friend I had growing up, and I’m certainly not alone in feeling that way. Her empathy for others, her sense of humour, her pride in being openly gay, and the love, care and compassion she had for her family were all factors that saw her magnetism and light never dwindle day in-day out. Plus, she dressed class! She had such an impact on so many people in Limerick. I am just one of the many people that miss her dearly.”

The LEXES Night Club Charity Reunion will be taking place this Saturday 16th September AT Dolans. Doors open at 9:30pm and admission is €5. Even if you cannot attend the event, purchasing of tickets would be greatly appreciated.

For more on this event and to purchase tickets click here