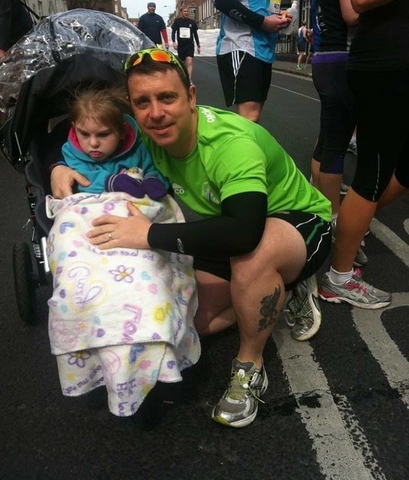 Liam Mulcahy pictured with his daughter Sophie before she sadly passed away in October 2014.

Liam Mulcahy, co-founder of Sophies Journey Foundation, is a winner in this year’s RSA Leading Lights in Road Safety Awards.

Sophies Journey Foundation was developed by Liam and Stacey Mulcahy as a foundation in January 2015 to support families who were dealing with children with life-limiting conditions in memory of their daughter Sophie who sadly passed away October 23, 2014.

Sophie was born on July 12, 2006 in the Coombe Maternity Hospital and was immediately transferred to Our Lady’s Children’s where she would had 6 heart operations in 7 months of her short life. Sophie spent the majority of her stay in Cardiac ICU 2 ventilated fighting battle after battle. Sophie was diagnosed with a rare condition called Ohdo syndrome but on a re-diagnosis in Manchester in 2012, it was founded Sophie had a rare condition called 1Q43. This condition, along with her 7 months in Crumlin left Sophie unable to walk, talk or feed herself.

In July of 2014 Sophie was diagnosed with late stage renal failure and due to previous surgery’s Sophie was not considered fit for a kidney transplant. Sophie, despite her constant fight, passed away peacefully surrounded by her family in the Rainbow Ward in The University Hospital Limerick in October 2014.

To thank the organisations that helped Sophie, Liam and Stacey started fundraising in 2007 and in the decade since have the last decade raised huge funds that went to families with children with life-limiting illness to help with the children’s needs. Sophie’s family have given a 100 percent commitment to this foundation in memory of Sophie’s legacy and to help improve the conditions that families with children with life-limiting illnesses endure on a daily basis.

Every year, the Road Safety Authority (RSA) presents ‘Leading Lights in Road Safety’ Awards to exceptional individuals and organisations that have made a concerted effort to promote road safety in their school, business, community or workplace and Sophies Journey Foundation were presented with an award the ceremony for all their amazing work. Congrats to all!

For further information on Sophies Journey Foundation, visit their website here.
To read more about the RSA, click here.