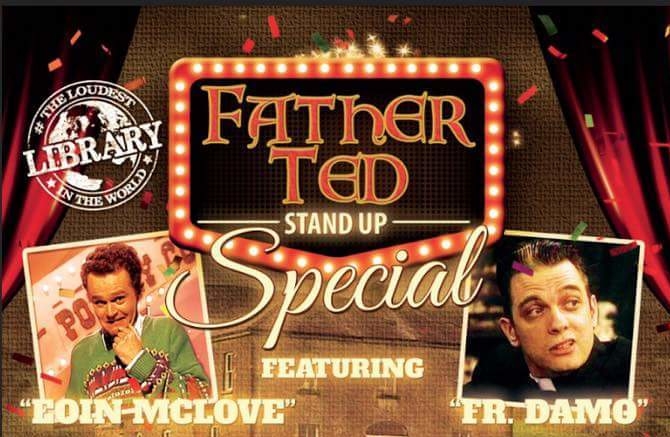 The Library Bar will host Tribal Komedy this October for a Father Ted special stand-up show on Friday October 14 in aid of Pieta House.

Tribal Komedy, based in Galway, have partnered up with The Library bar in Limerick city and will be providing a monthly Comedy event. This inaugural event will see all proceeds on the evening going towards Pieta House.

Featuring Joe Rooney and Patrick McDonnell who played the popular Father Ted characters of ‘Father Damo’ and ‘Eoin McLove’ respectively, will be splitting the headline slot on an evening that promises to be a show not to miss.

Tribal Komedy is made up of comedians Martin ‘Beanz’ Warde, John O’Hare, Ross McCarthy and Dj Chris Sture. Founded in 2015, the Galway based company already have venues in Dublin, Ennis, Tuam and now in Limerick and are looking to expand even further in future months.

“I ran an event for Galway Gay Pride, it was our first ever comedy night and that more or less pushed me towards branded comedy, rather than various venues without any direction,” said Martin ‘Beanz’ Warde.

“I have always had a bit of a grá for Limerick,” added Martin, “I performed at Limerick Pride, and I got to know a lot of people from Limerick. I wanted to go back there to perform again, and we saw an opening in the market.”

After speaking with the Library Bar in Limerick, the company was so impressed with the venue they asked if the bar would be interested in holding a monthly comedy night. Martin Warde described how the Limerick venue was happy to host the night, and it coincided with a Pieta House fundraiser on the inaugural night.

“I myself have lost a family member through suicide, coming up to the second anniversary this month. It is something close to my heart, so I am happy to let that be the launchpad. If the Library Bar, as businessmen, are willing to get behind that, we can definitely build on that,” Martin concluded.

Tribal Komedy’s inaugural Limerick event will take place on Friday, October 14 at Library Bar with a cover charge of €7. All proceeds on the night will go toward Pieta House.

You can find out more about Tribal Komedy here.
You can read about more events here.