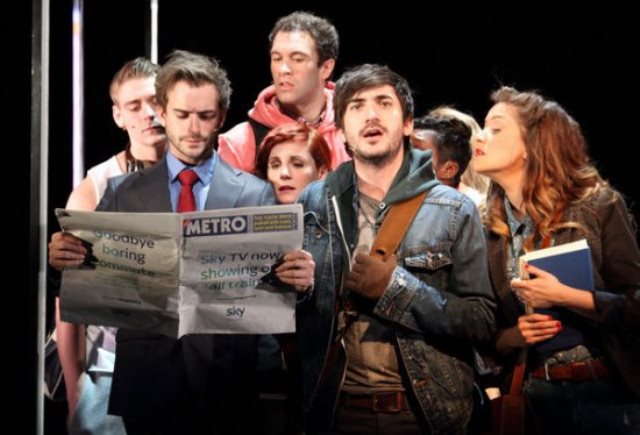 LIFT the musical by Craig Adams and Ian Watson.

From the same team that brought you the 2014 Irish Premiere of “When Midnight Strikes”, NMT Productions have announced their summer show of 2015 “LIFT the Musical” directed by Sarah Cahill.

Written in 2013, this modern musical by Craig Adams & Ian Watson tells a story of love, life and loss all within the confinement of a London underground lift. We see how the things we dare not say could change our lives and how those closest to us can sometimes be those whom we’ve never met.

Eight people get in a lift at the Covent Garden tube station on an ordinary morning and what follows is an exploration into their thoughts. The journey these characters take, however, lasts much longer then the one minute they spend in the lift. We see everything these unknowing characters think and while these characters’ innermost secrets are revealed, we realise that in some way they are all connected and by simply reaching out to one another they might change their lives forever.

Some of the cast members of Lift the musical have been revealed and include Niall O Halloran, Gillian Hunt, Stephaine Browne, Michael Anthony Greene and Timmy Moloney.

The musical will take place at 69 O’ Connell Street, Limerick (formorly The Belltable) on Friday 14 and Saturday 15 of August 2015 at 8pm.

Tickets are available on the Lime Tree Theatre website (link below), from the Box Office 061 774774 at the rate of €15 or concession tickets are also available for €12.

“Lift” the musical have been developed and licenced by Perfect Pitch.

Get more information from the Lime Tree Theatre website here.

Get updates on all shows from the Lime Tree Theatre Twitter page here.