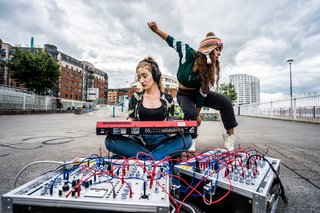 The festival will be offering screenings of 4 feature length films. The Secret Theatre is an extraordinary show filled with acrobats, snowflakes, clowns, princes and characters from our most popular festive ballets, after a young boy stumbles into a theatre in a deserted city. Stranger Than Paradise by Chris Haring and his company Liquid Loft is a choreographically conceived work for the screen: a subtly futuristic hybrid chamber play for eight people and an investigative camera. Horrible Creature by Irish director/choreographer Áine Stapleton continues Stapleton’s exploration of the life of Lucia Joyce. Filmed in Switzerland, Lucia’s own writing is interpreted by a cast of international dance artists, and conjures her world between 1915 and 1950. The work challenges the accepted biography of Lucia’s life and considers the complexity of mental instability.

Bring Down The Walls directed by Turner Prize nominee Phil Collins is a look at the prison industrial complex in the US through the lens of house music and nightlife, proposing the dance floor as a space of personal and collective liberation, and new ways in which we could come together as a society.  With a prison population of more than 2 million, the US is the world’s biggest jailer. Coinciding with the escalation of mass incarceration in the 1980s, house music emerged from Black, Latinx and queer communities embattled by oppressive law enforcement policies.

The Dance Documentary Double Bill at Belltable will open with award-winning Butterfly Dresses by Camille Auburtin. While Auburtin’s grandmother Micheline, a former ballerina and dance teacher, is at the end of her life due to Alzheimer’s, the director attempts to stimulate her memory through recollection of her rich past life in dance. In 7 Perspectives, choreographer Danièle Desnoyers discovers raw, unaltered footage from rehearsals of her recent creation with seven dancers, in which bodies were able to discover and embrace each other, from the time before the pandemic.

Work by Irish artists will include:

Light Moves 2021 Festival at Belltable is proud to present Limerick audiences with the experience of Blind Cinema, in which an audience of adults sits blindfolded, while children seated behind describe a film that only they will see.  Blind Cinema makes the experience of watching a film into a shared investment: a collaboration between young people and adults, examining ideas around language and interpretation, along with the potential for (mis)communication!

Light Moves Dialogues will include an event with Jean Butler, talking about her organisation Our Steps, which celebrates Ireland’s traditional dance and the stories of its people. Joan Davis, joined in discussion by dance artists Laura Murphy and Siobhán Ní Dhuinnín, will be inviting us to experience her Garden as Gallery.  Journalist and art critic Cristín Leach will be speaking to award-winning artist and filmmaker Clare Langan about her recent work The Heart of a Tree, a glimpse into a future world where human beings have evolved and adapted in order to survive. They will be joined by the film’s choreographer Maria Nilsson Waller. And in a very special panel discussion of Limerick voices, guests Brian O’Rourke, Mary Conlon and Margaret O’Brien will join Anca Minescu to discuss themes raised by the feature film Bring Down the Walls, and its examination of the US’s industrial prison complex through the lens of house music and nightlife.

On the final night of the festival Light Moves Festival at Glór, Ennis will be delighted to present a special screening of dance films, under the theme of “Vast & Intimate Places” culminating in the premiere Irish screening of Navigation. Set in the Burren, Navigation explores the current humanitarian crisis of displacement, featuring the performances of 10 dancers, singers and The Lismorahaun Singers, a local choir of 40 participants. Other films being presented will include Cortège which follows dancers as they ascend the stunning interior landscape of architect Zaha Hadid’s famous Havenhuis, and How To Sink a Paper Boat from CoisCéim Dance Theatre.

The festival is produced by Dance Limerick in partnership with DMARC (Digital Media and Arts Research Centre) at the University of Limerick. The festival is funded by the Arts Council and Limerick City and County Council.

Related Topics:Light Moves Festival
Up Next