By Richard Lynch on November 16, 2016@richanthon 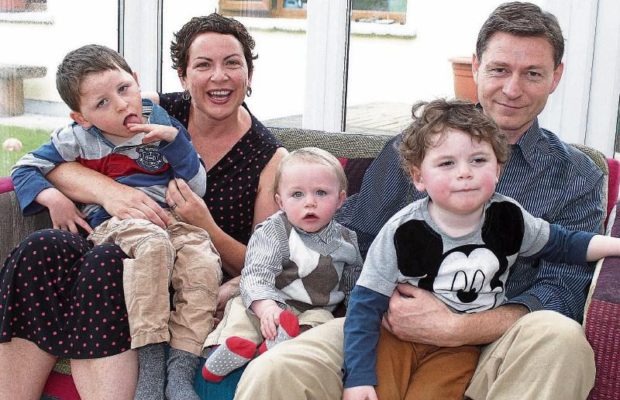 Light Up Limerick 2016 – Neil Shanahan with his parents Martina and Mike and his two siblings. Picture courtesy of the Limerick Leader.

As the Christmas season quickly approaches, the people of Limerick will gather on Sunday, November 20 to watch the streets of Limerick come alive for the Light Up Limerick 2016 when the Christmas lights are turned on for the first time!

The people of Limerick are expected to attend the turning on of the lights in their thousands. The annual magical unwrapping of the festive season in Limerick will this Sunday be the most dazzling yet with a brand new €100,000 Christmas lights display to be turned on and a very special young hand pressing the switch.

The Light Up Limerick 2016 lights will be turned on by three-year-old Neil Shanahan who survived a fall from the sixth floor of the Strand Hotel over the Summer this year. Neil will be accompanied by his parents Martina and Mike and has made massive progress since July.

A display of Christmas festivities will begin from 4:30pm that will leave everyone attending in anticipation for the turning on of the lights at 6pm, outside Brown Thomas on O’Connell Street.

There will be performances from a number of singers and homegrown bands as well as impressive soprano Sinead O’Brien and the Unity Gospel Choir.

Of course, a Christmas festivity would not be complete without Santa who will also be attending the event. There will be a possibility of snow with temperatures to plummet for the weekend.

“Limerick has had a great year in terms of economic progress and we have a lot to celebrate.  Neil’s miraculous recovery is one of the great stories of the year and he is a real beacon of hope for all to latch onto, not least at Christmas,” said Cllr Kieran O’Hanlon, Mayor of Limerick City and County.

“We have much to celebrate in Limerick today as it’s a city very much on the up and Limerick City and County Council, supported by Limerick Chamber, is making sure that the rise in sentiment and confidence here permeates Christmas also. Whether it’s coming to shop or socialise in Limerick this Christmas, people will definitely feel the air of celebration,” said James Ring, CEO of Limerick chamber.

Said Laura Ryan, Head of Communications and Marketing at Limerick City and County Council: “Limerick is undergoing a real renaissance at the moment and, in keeping with that, Limerick City and County Council is investing more heavily than ever in turning it into one of the top Christmas playgrounds in the country this year. People who come to Limerick this Christmas, including from neighbouring counties and further afield, will get a real sense of celebration from the moment they turn into the city centre. Christmas has always been special in Limerick and this year it will be more than ever and with an open invitation to all to come and enjoy.”

Anyone who plans to attend is advised to turn up early for the turning on of the Christmas Lights outside Brown Thomas for Light Up Limerick 2016.

Sunday is the starting point of a five week celebration that will also include:

Christmas Craft Fair – at Bedford Row on Saturday and Sunday,  December 3rd and 4th from 12-7pm.

Santa’s Post Box – on Bedford Row where elves will be busy collecting children’s wishes and dreams and where they can post that all important letter to Santa in plenty of time for Christmas. There will also be seasonal workshops hosting a feast of activities including Christmas tree decoration making, wrapping gifts, baking and storytelling on December 9th from 2-7pm and December 10th and 11th from 12-6pm.

The Enchanted Christmas Carriage – take in the magic of Limerick at Christmas from the comfort of festive horse drawn carriage.

A host of live music at Dolan’s and Live at the Big Top.

Christmas at King John’s Castle and a host of magical Santas and pantos across Limerick.

For more news of Christmas Events from I Love Limerick click here.