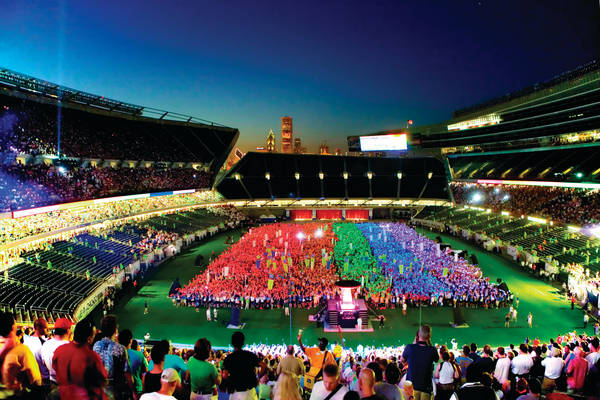 LIMERICK THROUGH TO SITE SELECTION STAGE FOR HOSTING 2018 GAY GAMES

Limerick along with London & Paris have been selected as finalists in the race to host the world’s largest sport and culture festival open to all – the 2018 Gay Games.
The three cities were shortlisted from a list of five which also included Amsterdam & Orlando. If successful in the process the 2018 Gay Games will attract in excess of 10,000 participants and approximately 15,000 spectators to Limerick and the surrounding areas in August of 2018. The University of Limerick will be transformed into The Gay Games Village where the majority of events will take place, along with a media and hospitality centre.
Dennis Sneyers officer for site selection, thanked the five bidding organizations: “Ever since competitive bidding to host the Gay Games began for Gay Games IV, ultimately won by New York 1994, we have faced the welcome challenge of choosing from among several qualified bidders. This cycle has brought us particularly outstanding bids from Amsterdam, Limerick, London, Orlando and Paris. Each group has brought a truly distinctive take on what the Gay Games can be, and has enriched our own thinking about our event. All have been highly professional and responsive to the demands of our bidding process.”
John James Hickey, Bid Coordinator for Limerick’s Bid said “Limerick is super proud today. We began this journey twelve months ago and we will now move forward to welcoming the Federation of Gay Games to Limerick and the Shannon region in July 2013 for our site visit. Today, we are going to celebrate this momentous and historic day as one of the first Irish cities to be nominated for this prestigious event which will bring some 12,000 participants from across the World to Ireland in 2018.’”
Limerick will host the Site Selection committee in July of this year where five members of the Site Selection Committee will visit the city and view the facilities that Limerick will use should the city be chosen as host. The announcement of the winning city will be made at the Federation of Gay Games Annual Conference onOctober 7th in Cleveland Ohio – host city to the 2014 Gay Games.
Ireland has been represented well at the last Gay Games in Cologne 2010 where in excess of 100 competitors were register from Ireland and Team Cork taking home 27 medals. Already some participants have registered their interest in representing Ireland in next year’s games.
Limerick’s bid has already received some positive news in the form of Boxing & Wheel Chair Rugby been accepted as new sports to the Gay Games. These two new sports are unique to Limerick and open up the 2018 to become all inclusive where anybody can take part regardless of Ability, Gender or Sexual Orientation.
The next stage doesn’t come cheap and carries a price tag of approximately $10,000 US Dollars. This is in addition to the $10,000 USD already invested into the Bid Process.

The 2018 Bid Committee are asking anyone who is in a position to support the bid to contact them via the website www.limerick2018.com or through Facebook & Twitter. Limerick’s bid has received support from Shannon Development, Failte Ireland, Shannon Region Conference & Sports Bureau, University of Limerick & University Arena, Limerick City Council, Shannon Airport, Limerick Chamber of Commerce, The Red Ribbon Project and Annalog Devices.