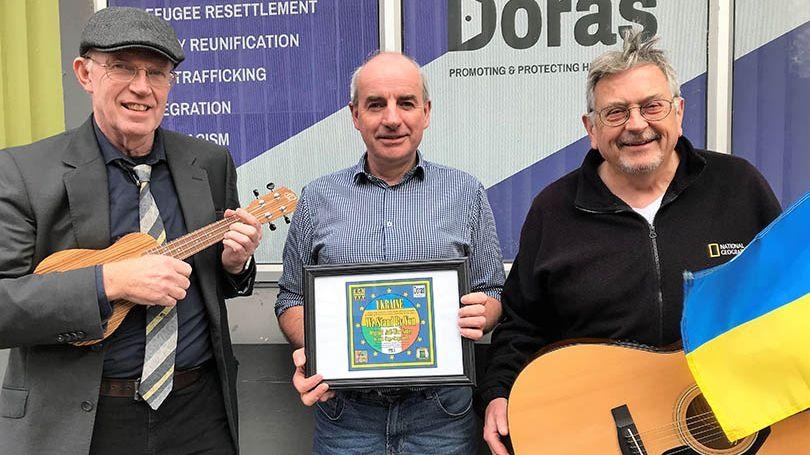 The Limerick Writers Centre run the popular Acoustic Club for songwriters every month in the Record Room of the Commercial Bar, 47 Catherine Street.

Now, in association with EGN Productions, they are launching a fundraising compilation album ‘Ukraine – We Stand by You’ to raise funds for the Doras Ukrainian Refugee Appeal Fund here in Limerick.

Doras is an independent, non-profit, non-governmental organisation working to support and promote the rights of all migrants in Ireland.

20 singer-songwriters are featured on this unique album of original anti-war songs, with some of the artists performing their songs at the launch gig which takes place Sunday, October 30, 2022, at The Commercial Bar.

You are invited to come along to the Limerick Acoustic Club Ukraine fundraiser launch party and lend your support. Sales from the album go directly to the Doras Ukrainian Appeal Fund.

John Lannon, CEO of Doras in Limerick said, “We’re delighted to be associated with the initiative to produce a collection of anti-war songs. As a refugee support organisation, we’re acutely aware of the devastating impact of war, and how it divides and traumatises. It’s fitting that proceeds go towards helping people who have had to escape from the ongoing war in Ukraine. “

The production cost for the Limerick Acoustic Club Ukraine fundraiser album were borne by the Limerick Writers’ Centre and ENG productions. Eugene Nolan, producer of ENG Productions said, “Our aim is twofold, to inspire creativity by getting songwriters to write an anti-war song and to support Doras, through the money raised from the sale of the album, in their efforts to provide assistance to refugees, especially through their Ukrainian Appeal Fund”.

Joint co-ordinator of the venture, Dominic Taylor, said, “We would encourage all, especially the Ukrainian community, to come out and support the album launch on the 30th of October, a grand time is guaranteed for all.”