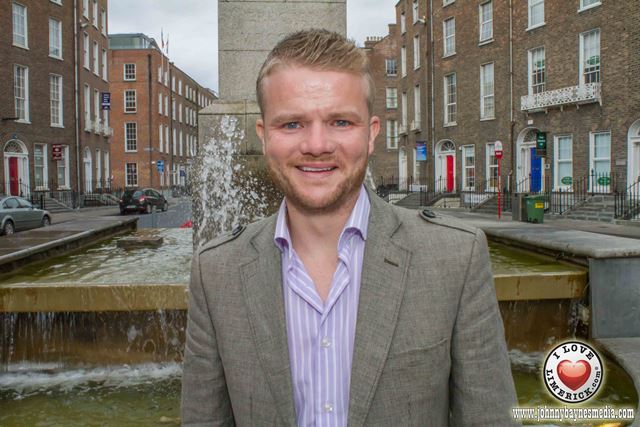 Peter recently with Pat Barry from The Gentry Barbers in Limerick with Narcan writer Peter McNamara and his son who is also an actor in Narcan Harris Mcnamara. Photo credit Peter Halpin Facebook Page.

Born and raised in Mungret, County Limerick Peter Halpin talked to us about his impressive, ever-growing CV which oozes his passion for acting, embedded in him from the very beginning: “Since I was a small boy, I have always wanted to be an actor. I have always been acting the eejit as my mother says. It comes to me naturally; I love the journey of becoming different characters.”

“I started acting at a very young age in a local theatre school in Limerick called Spotlight Stage School. They did a show every year and I was lucky enough to get principal parts in that for a number of years. At the age of 15, Angela’s Ashes the film came to Limerick and Ros Hubbard from Hubbard Castings came to my theatre school and she auditioned me and after four auditions and three months later I secured the roll of Malachy McCourt, Frank McCourt’s brother in the film Angela’s Ashes.

Some of Peter’s other film and TV credits throughout the years include Fergus Doran in “The Clinic”, Joseph Hanratty in Neil Jordan’s film “Breakfast on Pluto”, Phil Connors in the RTE/BBC drama series called “Rough Diamond” directed by Simon Massey, Eugene in “Garage” directed by Lenny Abrahamson, Himself in Allied Irish Bank’s “First Time Buyer” commercial. Peter also starred in the DVD of “Alone It Stands” produced by Gyre and Gymble not to mention endless theatre performances since a very young age.

Peter explained: “Angela’s Ashes was my first big break when I was fifteen years of age doing my Junior Cert in the Crescent College Comprehensive and I just went from strength to strength after that. I secured an agent in Dublin and work bred work, I worked continuously right up to last year. New York had always been in the back of my mind, I have family over there and I visited there every year as a kid, I know my way around there at this stage plus it is the home of theatre and theatre is my passion.”

Speaking about the early days Peter added: “On my final day of school I was doing my construction studies exam and that evening I had an audition with a woman called Garry Hynes who I had never heard of or never met before, she is a multi-Tony-award winning theatre director with Druid Theatre Company. I went down and I read a few lines of dialogue and I told her a few lies and we sang a few songs and got on great. I got a phone call that evening to say I was shortlisted for the part of Carthalawn in John B. Keane’s play ‘Sive’ which Druid were doing at the time. The following day brought the good news that I had secured the role.”

“When I left school I had auditioned for all of the different theatre schools and I was lucky enough to be accepted into each one of them but then when I was offered the work my agent at the time said why would you study to do something you’re being offered to do? I took the work; I was lucky work bred work. I was lucky for a long time I was working continuously there were times when I was double jobbing. There was a time when I was doing two movies at one time and I was doing rehearsals for a play.”

Why the big move to NYC? “The credit crunch and the economic downturn hit here around 2006 and work dried up. Turning 30 had a big thing to do with it too, I blew out the candles on my thirtieth birthday and I said right it’s now or never. It had been itching at me for about 12 months prior to that but I think it was that actual occasion that made me pull the trigger and say “right I’m booking a flight.”

I went over on a visitor visa, kind of on a vacation which was more of a test than anything else and it turned out to be worth pursuing. I have now secured my artist visa, I am delighted to have it and it is a relief to have it for three years and I can renew it again or go down the green card route.”

Peter is clearly passionate about what he does he speaks about  acting as if it is something he simply couldn’t live without like food or water: “That journey for me is the most exciting and interesting part for example I was doing a TV show in New York recently and I was playing the part of a guy that was suffering from cerebral palsy and for me that was a major journey I had to go away and study the disease and all the intricacies and the spasms, the posture and your walk. Different characters bring different journeys and for me that’s what makes it so exciting because you just don’t know what is around the corner it could be an ordinary Joe soap or it could be a mass murderer.”

Peter’s continues to grow his CV with his latest venture which brings him to New York with six other Limerick locals as he stars in Peter McNamara’s film Narcan: “Now I am working on Narcan, it is a pleasure to be working with Peter McNamara he is an absolute gentleman and it is great to be working with Limerick people in a foreign city and one of the most vibrant cities in the world and one of the most synonymous cities with what we do, it is a real artistic vibe over there and it is culturally wowing and I love being there, I love that these guys are now coming over to shoot, it is exciting times. I love Peters work it is visceral, it is real, he is Ireland’s answer to Ken Loach in my opinion. I watched his recent short film ‘Loss’ and it moved me, I was very emotional after watching it, it struck a chord with me and I thought one thing; I said I have to work with this guy and now I am thankful and grateful that I have finally got to work with him.”

Narcan is a short film by Peter McNamara who is a multi-award winning film maker from Limerick. Peter Halpin explains the Indiegogo campaign which is currently up and running in order to raise funds to finish the production of the Limerick film, in this short clip below that is well worth a watch.