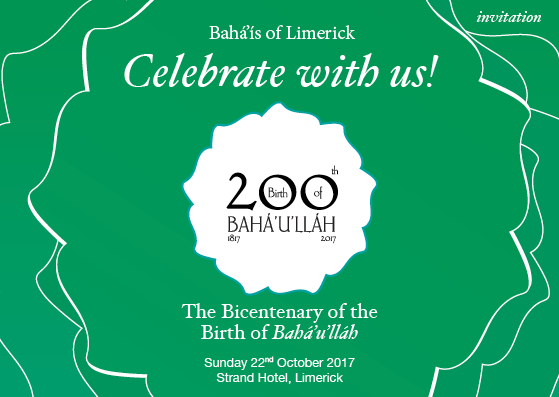 On October 22nd at the Strand Hotel, the Limerick Bahá’í community and their friends will be coming together to celebrate the two hundredth anniversary of the birth of Bahá’u’lláh, the founder of the Bahá’í Faith. Here in Limerick the celebration will comprise a varied programme including dance, singing, prayer and storytelling. The event is open to the public and all are welcome.

As well as the prayerful and joyful celebration of the birthday itself starting at 3.00 pm on October 22nd in Limerick, the Bicentenary is being marked in a wide variety of other ways in other cities, from a dedicated public garden space in Tralee to a new dramatic production which will be staged in the MidWest as well as in other Irish venues.

Trisha Rainsford, Secretary of the Limerick Bahá’í Assembly told ilovelimerick about her excitement for the event “It is so exciting for me as one of the Limerick Baha’i community to be part of this celebration and to reflect on the fact that all over Ireland – and indeed all over the world – Baha’i’s and their friends are coming together to celebrate the 200th anniversary of the birth of Bahá’u’lláh.”

The national administrative body of the Bahá’í Faith in Ireland has published a booklet about Bahá’u’lláh, detailing his life and achievements. Entitled simply ‘Bahá’u’lláh’, the pocket-sized booklet was written, designed and printed in Ireland.  As well as the story of Bahá’u’lláh’s life it includes a small selection of prayers and sacred Writings as well as listing some of the principles by which Bahá’ís strive to live their lives. Those principles are wide-ranging and include the concepts of cooperation, reciprocity and honest consultation. Bahá’u’lláh laid emphasis on the need for universal education, available to both girls and boys; and He said that until the equality of women and men is recognised as a reality, the progress of civilisation will be hindered.

“The little booklet produced for this Bicentenary gives some insight into the remarkable life of One Who suffered greatly at the hands of the authorities simply because He promoted teachings which today are accepted throughout the world,” said National Spiritual Assembly Chairman Brendan McNamara. He expressed the hope that the booklet would be widely shared with those wishing to know more about Bahá’u’lláh.

For more stories on the Midwest Interfaith Network click here