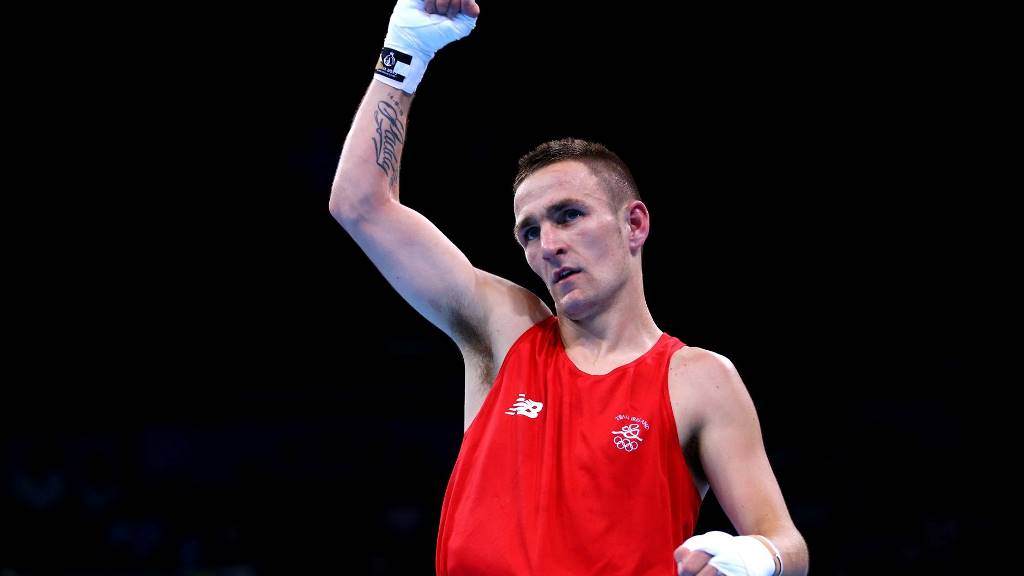 Picture: St Francis Boxing Club Limerick fly Myles Casey, celebrating being the first boxer to win a bout at the inaugural European Games as his bout with Ivan Fihurenka of Belarus was the first contest on the program on Day 1 of the tournament.

Limerick boxer Myles Casey is off to a winning start at the European Games in Baku and has made history by becoming the first fighter to win a bout in the events history.

Early this Tuesday morning Casey had the distinction of boxing in the first ever bout at the inaugural European Games.

The St Francis Boxing Club star was a unanimous winner over Ivan Fihurenka of Belarus.

Casey is said to have brought back memories of Andy Lee, the current WBO world champion, for Irish head coach Billy Walsh..

The Limerick man was a 29-28 winner on the scorecards of all three judges in the flyweight (52kg) bout in the Crystal Hall in Baku.

Boxing out of the red corner the judges from Italy, Sweden and Korea all had Casey as the 10-9 winner of each of the three rounds in Azerbaijan.

Walsh said: “I was thinking as I walked into the arena that the last time I walked into a major championship with a Limerick man from the same club was with Andy Lee 12 years earlier.

“The first two rounds were close, although we thought we edged them, but Myles drove on in the third round to take it. It was an excellent performance and we’re very happy with him.”

Casey, who etched his name into boxing history as he became the first winner of a bout at the new European Games, set the tone early, coming out of the corner on the front foot and working his jab.

“I needed to do that,” he said. “I needed to show the judges I was here for one reason and that was to win.

“I’m going to do what I can to win. I know I’m not at my best just yet but he was a tough lad. The next fight, whenever it is, whoever I’m boxing, that’s a final to me. That will be my main focus,” added Casey.

A brother of former world title contender Willie ‘Big Bang’ Casey, Myles now fights local favourite Elvin Mamishzada in the Round of 16 on Saturday morning at 10.15am Irish time.

St Frances Boxing Club said on Facebook on Tuesday: “Myles Casey makes history and becomes the first boxer ever to win a fight in the European games, Myles beat his opponent from Belarus and got the Irish team off to a perfect start in these games (more details to follow) Well done champ we are all very proud of you, Hopefully that’s the first win of an Irish hatrick today”.