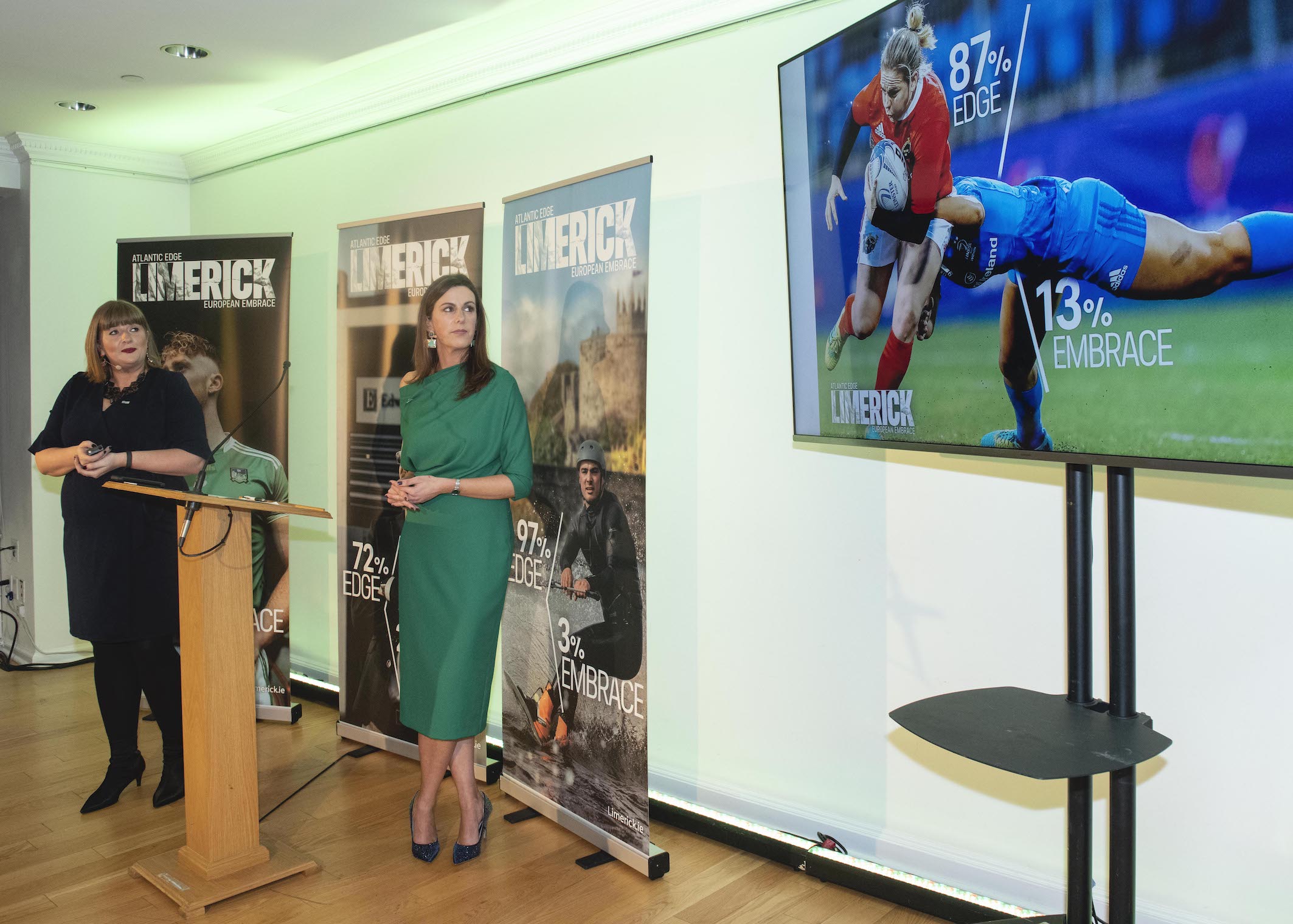 Limerick brandmark NY launch was well represented by our very own Laura Ryan, Limerick City and County Council Head of Marketing & Communications who spoke to representatives from the New York business and arts communities, Tourism Ireland and the Limerick diaspora accompanied by team-mate Aoife O’Shaughnessy (on right).

NEW YORK, February 13, 2020:  Limerick, Ireland’s third-largest city declared a bold ambition for US inward growth and investment with the unveiling in New York of a new brand positioning and international marketing campaign.

The new Limerick brandmark – ‘Limerick – Atlantic Edge, European Embrace’ was unveiled to an audience that included representatives from the New York business and arts communities, Tourism Ireland, and the Limerick diaspora at the Irish Consulate on Park Avenue.

Developed by global creative agency M&C Saatchi, the new brand positioning internationalises Limerick, placing it at the most dynamic global crossroads and capturing the sense of warmth and resilience of a historic city and county.

Fantastic group gathered for the US launch of the #LimerickEdgeEmbrace brand at the Consulate this evening. It was a pleasure to be joined by #Limerick Mayor Michael Sheahan and to hear about the great things Limerick has to offer! pic.twitter.com/tcy6QpOk66

The creation of the Limerick brandmark involved key inputs from a range of stakeholders, from members of the public and business community during early-stage focus groups through to students of the renowned Limerick School of Art & Design – one of the top 50 third level art and design institutions in the world.

In addition to M&C Saatchi, the creative process also saw a number of local companies, including True Media, Limerick Printmakers, Treaty City Brewery, and Limerick Chocolate Shop, engaged by Limerick City and County Council, while Ireland’s largest marketing communications company, Core Media, will be involved in rolling out the programme nationally and internationally with a bespoke media buying campaign across traditional and social media. 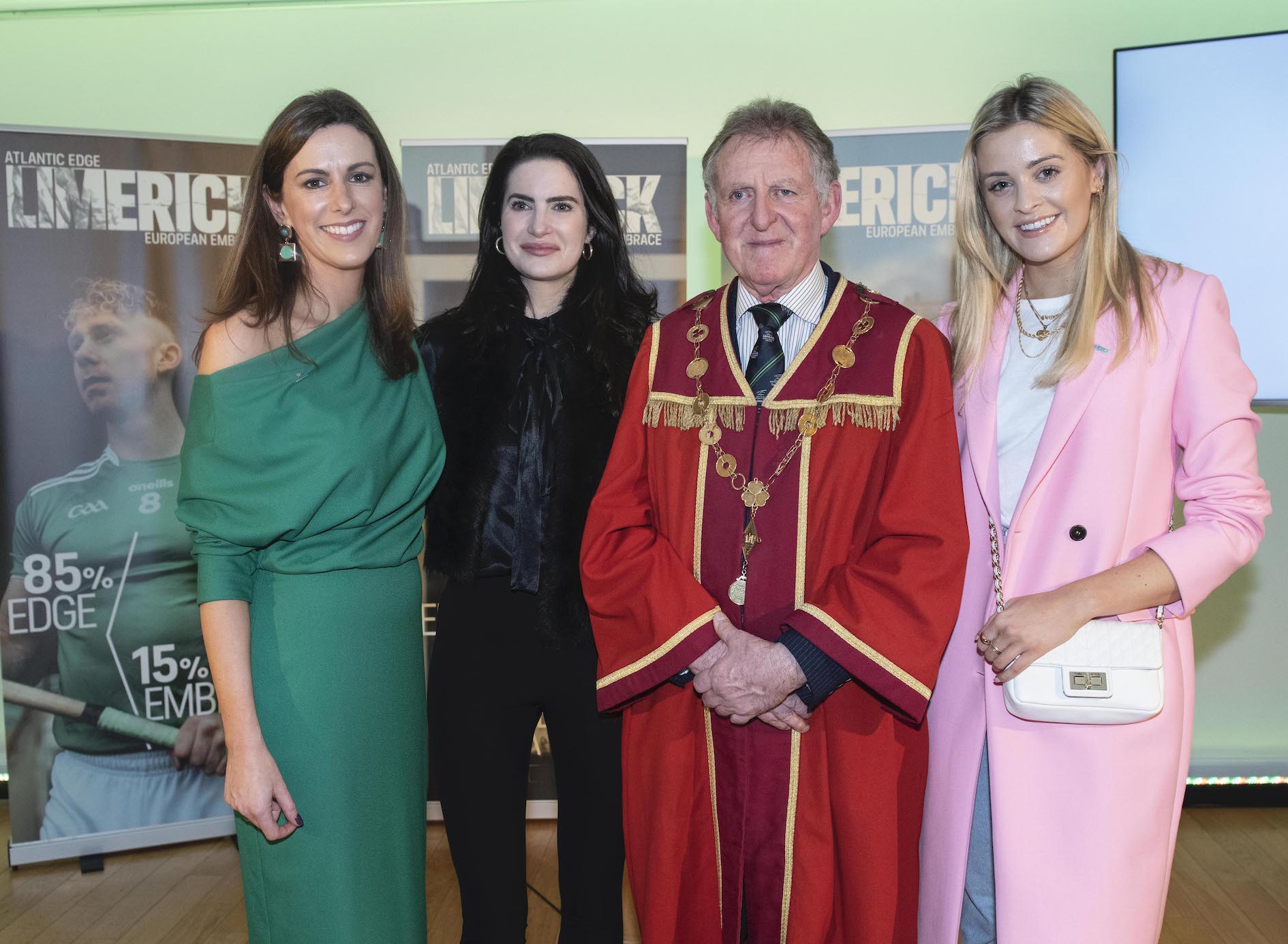 A major multi-market campaign, ‘Percentages’, is a cornerstone of the programme which aims to quantify Limerick’s combination of edginess and friendliness. The character and culture of Limerick will also be articulated through a roll-out of Limerick ‘local heroes’, which will see inspirational people tell their stories on video and become faces of the campaign to amplify the sense of edge and embrace that typifies the city and county. These include aeronautical engineer and author Dr. Norah Patten, who is hoping to become Ireland’s first astronaut; and Michelin-starred chef Michael Tweedie, Ireland’s queen of style Celia Holman Lee, hurler Cian Lynch and climate activist and schoolgirl Saoirse Exton.

Speaking at the US launch of the Limerick brandmark, Mayor of the City and County of Limerick, Michael Sheahan, said that the brand positioning and campaign reflects the confidence across the city and county today.  “It is great to be here in New York City at the launch of this new branding of Limerick which is a sign of newfound confidence in who we are, what we are, what we have to offer and our delight in the place we live. This is a real milestone for Limerick. We’ve had an economic transformation over the past decade and we are now rightly going out proudly to the world and inviting them to experience our vibrant city and county. Whether through inward investment, coming here to enjoy our dynamic tourism offering or, indeed, coming to work in and enjoy the affordability of our city and county, we have a compelling offering here now and it’s right that we would take that to the world, By harnessing the power and potential of our diaspora, we can work to make Limerick the economic, cultural and educational powerhouse that we know it can be” said Mayor Sheahan.

“Limerick has transformed hugely over the last 10 years while staying true to its heritage and identity. This is reflected in the new branding for Limerick and we are delighted to host the New York launch of this brand in the Consulate. Limerick has a strong reputation here in the United States, for people, for business, for culture and for sport and the new branding will be a renewed focus on that reputation.”

Pat Daly, Chief Executive of Limerick City and County Council said this brand positioning and marketing campaign will play a key role in accelerating the economic momentum already gathered in Limerick, which has seen record jobs growth over the past decade.

“We now have dynamic new assets for Limerick that will give us an edge to generate more inward investment, more tourism and more people to come and live and work here. In doing that they will join a city and county on a very exciting journey that will benefit all. Our ‘Limerick 2030: an Economic and Spatial Plan’ is a framework for the future. It was set in place in 2013 but we have already surpassed the job targets for it over a decade out. So now we go again and this brilliant new asset is a timely and exciting lever to propel us forward.”

Lots of support for our Brand #Limerick launch from the #Limerick diaspora in NYC this evening! ?? #LimerickEdgeEmbrace #HowLimerick pic.twitter.com/ZRidOp2Eo1

Said Limerick City and County Council Head of Marketing & Communications, Laura Ryan:  “A huge amount of work has gone into getting us here today but today is really just the start. We’ve captured the essence of Limerick and we now take that story stateside to wherever we believe there are opportunities for Limerick. Today is a reflection of the new ambition that Limerick has.  The brand reflects the confidence of a transformed Limerick. One that welcomes all, that has grit, determination and resilience in abundance and one that is at the world’s most dynamic crossroads, where Europe and the Atlantic meets.”

Mary Harris, Managing Partner, M&C Saatchi, said: “We’re incredibly proud to have taken the creative lead on developing the first brand for Limerick City and County. The brand and campaign we have developed represents a major statement of intent for Limerick and sets out its global ambitions. ‘Atlantic Edge, European Embrace’ immediately locates Limerick in the world and captures its grit, determination, and warmth. It also helps establish the City and County as the gateway to Ireland’s premier tourist proposition – the Wild Atlantic Way whilst underlining Limerick’s strong cultural links to Europe, both now and in the past. Working with Limerick has been a true delight – everyone we have encountered has been so generous with their time and their insight. There is a palpable passion for the county and a belief that the time is now for Limerick to come into its own and take its place on a global stage. It’s a very special place and I’m looking forward to seeing it fulfill its potential.”

Memorare exhibition by Mary Nagle comes to the LSAD Gallery