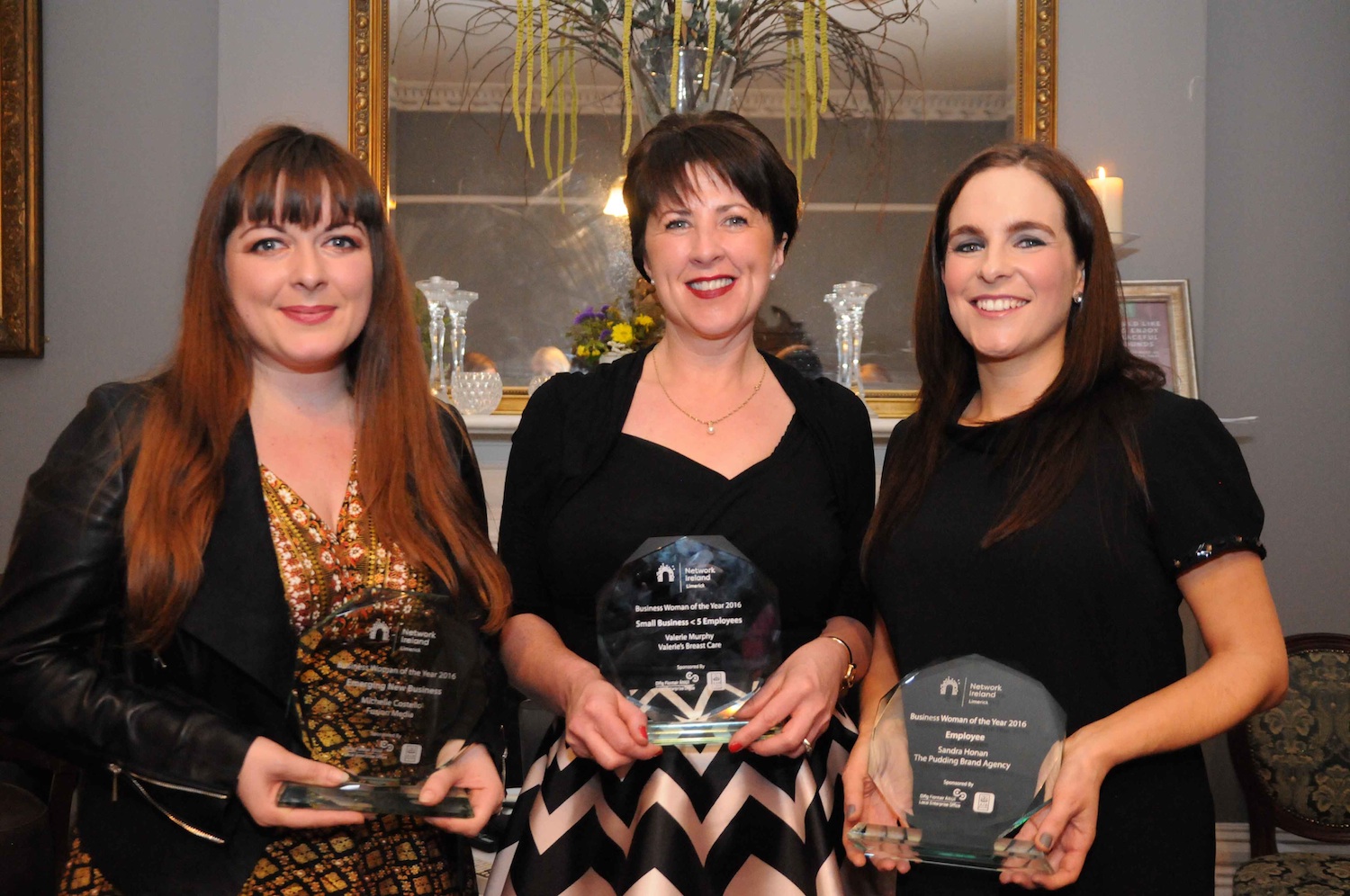 The winners of the Network Ireland Limerick Business Woman of the Year Awards 2016, sponsored by LEO Limerick and AIB, were announced at a special awards evening at No.1 Pery Square.

The winners of each award category will now go on to the national finals which will be announced at a Gala Ceremony in September in Cork.

The ten finalists, representing a broad range of businesses, were joined by their family, friends and fellow members at the glamorous awards ceremony.  Also in attendance were the judges; Helen O’Donnell, Dolmen Catering, Judy Tighe, AIB and Bernie Moloney, Limerick Enterprise Office, along with Deirdre Waldron, National President of Network Ireland.

The Awards night was opened by special guest speaker Chupi Sweetman-Pell, Founder and Creative Director of multi-award winning jewellery brand Chupi.  She shared her success story to date and gave support to the finalists noting that she has lost more awards than won and found that “loosing can be more powerful”.

Speaking at the Awards ceremony, Louise Lawlor, President of Network Ireland Limerick said, “We are delighted to have this opportunity to recognise and celebrate the excellence, professionalism, vision and leadership of our members.  Our network is growing rapidly and it’s fantastic to see such a wide variety of businesses represented.  I hope our winners and finalists really benefit from the recognition they are receiving by being part of these awards. I would like to especially thank the support of our sponsors and judges who made this fantastic evening possible.” Limerick Business Woman of the Year Awards 2016

Network Ireland Limerick is supported by the LEO and Savoy Hotel. Limerick Business Woman of the Year Awards 2016

Former Topshop designer turned jeweller Chupi Sweetman-Pell, runs multi-award winning jewellery brand Chupi from their base in Dublin, Ireland. Selling worldwide to over 58 countries, the brand is currently stocked in several high end department stores and key boutiques around Ireland with plans for global expansion. With exciting collaborations with the likes of Aer Lingus and a new line of fine solid gold jewellery the future is sparkling.

Raspberries, swan feathers, and hawthorn leaves catch the eye of former Topshop designer Chupi Sweetman-Pell and she turns them into beautiful pieces of jewellery by casting ‘the already perfect forms of wild and natural things’.

Irresistibly drawn to ‘wild and natural things’ she began making jewellery by casting found items including swan feathers, tiny twigs and acorns and found there was a real demand for her work. With her retail experience with Topshop under her belt, she turned her interest solely creating delicate jewellery made for your inner magpie, delicate pieces in sparkling gold and the shiniest semi-precious gems. Read more about Chupi Here Limerick Business Woman of the Year Awards 2016

As the driving force behind Fusion Media, Michelle Costello has gone above and beyond in making Fusion Magazine and The Limerick Magazine what they are today. With a background in the media industry spanning sales, public relations, advertising, project management, event co-ordination and marketing, Michelle started out with the intent of filling a gap in the market in Limerick, and wanted to create a platform for creative communities. In 18 months since launching Fusion Media, Michelle has been responsible for publishing over 20 issues of the two different publications so far. Since its conception, Fusion Media has grown more rapidly than anyone could have anticipated. With 2 publications, a graphic design department, web development and content creation, the next few years are set to be one of growth and expansion. What are Michelle’s goals for Fusion Media in the future? “The goal for both Fusion Magazine and The Limerick Magazine is that people who are in it are there to inspire others. The rest is to work and collaborate on lots of exciting and fun projects with fun and exciting people.”

As Chief Communications Strategist with The Pudding Branding Agency which specialises in Strategy and Design, Sandra heads up all things communication. She has a passion for persuasive storytelling and has secured coverage in a number of national media outlets including the Sunday Business Show on Today Fm, the Irish Independent, Irish Examiner, Image Magazine and the Irish Country Magazine. This coverage has increased brand awareness of The Pudding nationally.

Using the experience and knowledge she’s gained after working for up to ten years in local and national media, Sandra also works with The Pudding’s clients on their PR and Communications. She works with them to identify brand messages they should communicate, unlocks the newsworthy potential within these messages and pitches them to the relevant media.

Valerie Murphy runs Valerie’s Breast Care, a service, which provides breast prostheses, mastectomy lingerie & swimwear to women who have had breast cancer surgery. She gives her clients the option of an appointment at her Limerick shop or a complimentary home visit in the Mid West Counties. Trained in Texas, in 2012, she has introduced new, fashionable & innovative American & European products to Irish women.

Valerie was drawn to work within breast care when she was a volunteer at a Breast Cancer Organisation, in America. Since then, she has been involved in various projects and events which fundraise for Cancer Support Services. She also gives breast cancer information awareness talks, encouraging people to self-examine & attend mammograms as ‘early detection saves lives’. Valerie loves to communicate all aspects of the service, with women, through her facebook page www.facebook.com/Valeriesbreastcare

Living in the countryside with her husband Barry, they enjoy the outdoors with their three lively children, Paddy, Isolde & Frankie.

You can check Network Limerick out on Facebook here.
You can read more on Business here.
For more related stories by I Love Limerick, click here