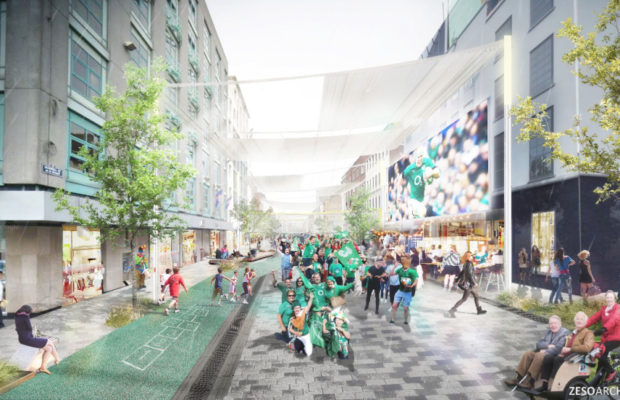 O’Connell Street reimagined by Zeso Architects on behalf of LiveableLimerick.

The revitalization plan will hopefully begin next summer, with the installation of more pedestrian areas along with larger footpaths between Denmark Street and Cecil Street.

Dee Ryan, Limerick Chamber CEO, said, “Attention must now turn to ensure that we get the highest quality of finish on the public realm aspects of the scheme and that we deliver this project as quickly as possible for the business.”

“The inclusion of a segregated cycle lane and introduction of a 15km/h speed limit are to be welcomed and should not significantly impact on the progress of the next phase of work on the project,” she added.

Councillors vote 15 to 3 in favour of #OConnellStreetRevitalisation plans subject to inclusion of one segregated cycle lane and a 15km speed limit.

Limerick Chamber issued another call to metropolitan area Public Representatives to vote in approval of the O’Connell Street Development plans at a special meeting on the 30th of September, where it was confirmed that the plans of revitalization would go ahead.

The Chamber is pushing for a connected bicycle network, spanning Castleconnell in the East to Patrickswell in the West, covering all the areas where people, work, study, and play. Although this top-class bicycle lane will not be inputted in O’Connell street, the Chamber ensures this will not affect cyclist’s traveling time.

Addressing the concerns about lack of provision for cycle lanes or the need to go for full pedestrianisation, Dee Ryan, Chamber Chief Executive Officer, said, “In our view Limerick is not ready for full pedestrianisation yet, we don’t currently have enough footfall or people living in the City Centre to make it an attractive proposition – however, there is nothing to prevent us from altering the operations of the four blocks of that are being redeveloped at any time.”

“Limerick Business, across all sectors, urgently need this investment in our urban center and we call on Metropolitan Councillors to vote in approval of the plans. Private investors are investing heavily in the City and announcements of projects like the upcoming retail development at Arthurs Quay and the welcome news of a City Centre campus for the University of Limerick all make this long-awaited improvement of O’Connell Street even more pressing,” she added.

In its detailed submission on the project, Limerick Chamber calls for expert advice to be sought in finalising the design of the Public Realm aspects of the plan, including the development of a Sensory Plan that will consider all aspects of how the landscaping, artwork, and lighting will impact on the visitor experience.

James Ryan, Chair of the Chambers Committee for Retail and Hospitality and owner of O’Connell Street, said, “Limerick Businesses have fought hard to come through the recession and had to re-examine our value offering to ensure that we were delivering the best possible experience for customers. We call on the Council to apply those same high standards to the finishes and the crucial public realm aspects of the detailed O’Connell Street design.”

Ms. Ryan said, “Our vision in the Chamber is for a multi-generational, thriving shared space that is safe and accessible for all. We believe that Limerick has an opportunity to be leaders in thoughtful urban design by putting visitor experience at the center of plans.

“Businesses along the remainder of O’Connell Street are at a disadvantage compared to their counterparts along Phase 1. The International Rugby Experience will have a newly defined streetscape to one side, with the old layout on the other side.  Completion of the street as envisaged in earlier plans will alleviate these concerns. Indeed, we call on the council to prioritise the completion of the scheme up to the O’Connell street monument and to ensure Limerick is “Ryder Cup ready” by 2026,” she added.

Finally, the Limerick Chamber states in its submission that it considers the delivery of the remainder of O’Connell Street redevelopment as a matter of urgency and clarification is sought in regards to the Council’s plans.

The proposed improvements to O’Connell Street, which would be to the benefit of our city center trader members, are also strongly welcomed by the Region’s largest employers who recognise that a thriving urban center experience would be a critical asset in their efforts to attract and retain valuable skilled workers.