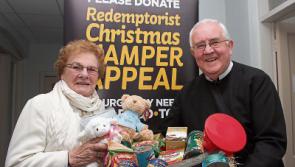 Christmas is one of the most cherished times of the year, a time where friends and family come together, but for some this time of year is among the hardest and most difficult periods.

For those less fortunate than most, Christmas can be an extremely difficult period trying to find the resources to put food on the table and presents under the tree to create the perfect Christmas atmosphere.

This year will again see some 7,000 food hampers distributed to those in need across Limerick city and county running up to Christmas.

Hampers worth an impressive amount of €120,000 were distributed in Limerick last year according to Fr Seamus Enright, rector of the Redemptorists at Mount St Alphonsus, and hopefully that level of generosity can be maintained or even increased this year.

The religious order, which works on this campaign in association with St Vincent de Paul, is now ready to collect donations from people for the hampers. People can give non-perishable dry foods, cash, or toys for children.

Any donations can be dropped into the office attached to the Redemptorists Church or to SVP which distributes the packages on Hartstonge Street.

Limerick charities such as Novas, which support homeless people and those at risk of becoming homeless, have also been encouraging restaurants and hotels to support families in B&B accommodation with hot meals.

The appeal, from Novas’ Intensive Family Support Service on Mungret Street, comes as approximately 15 families reside in hotels and B&Bs around the city and county every night.

“Our volunteers will pick these meals up and deliver them to the families directly, so businesses that get involved in the appeal don’t have to worry about that side of things” expressed Clare Brooks, Manager of Novas.

The Shoebox Appeal is also back from Wednesday, November 9 and they will take in donations and shoeboxes filled with goods at Unit F3, Limerick Enterprise Development Park, Roxboro Road. The warehouse will be open each weekday from 10am to 9pm until Friday, November 25.

The shoeboxes can be filled with small gifts bearing the four Ws; something to wash with, something to wear, something to write with, and something to ‘Wow’ the recipient – even a small cuddly toy, which will fit in the box. They hope that 12,000 boxes of gifts will be sent to children in war-torn and impoverished countries again this year.

Check out The Redemptorists Church here.