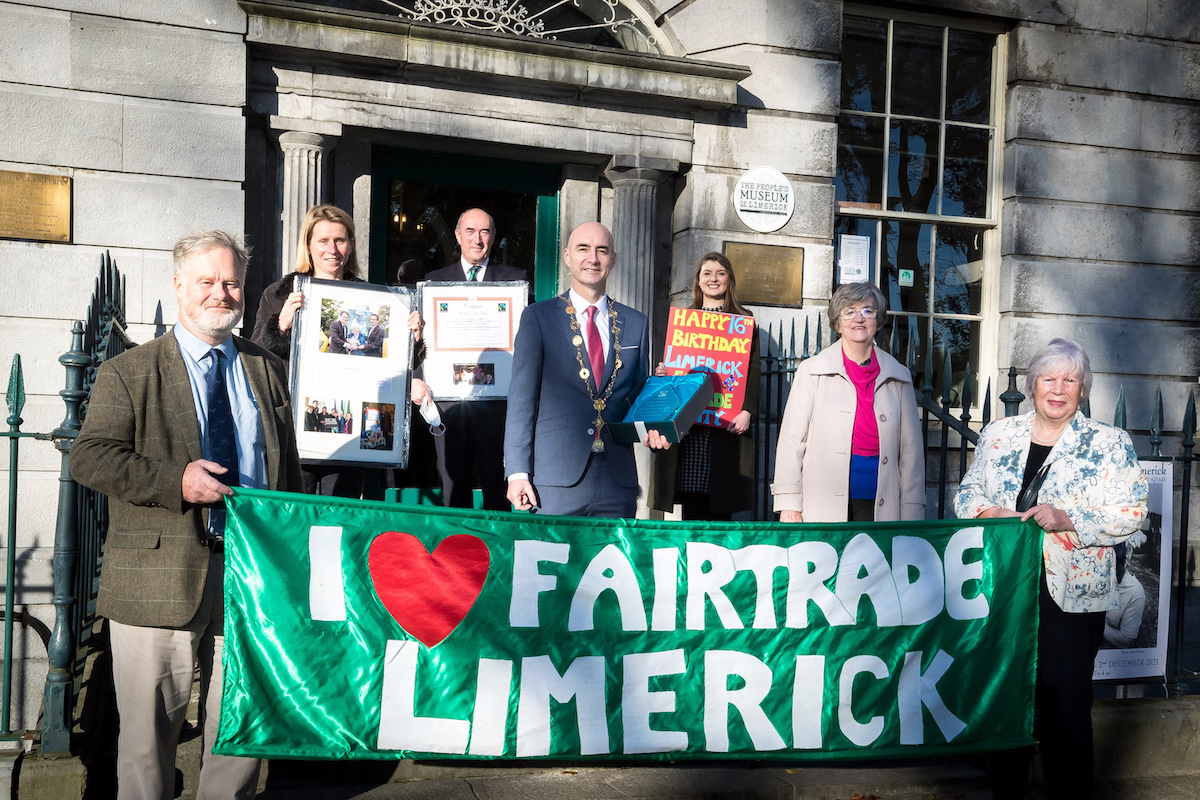 Limerick City is celebrating its 16th birthday as a Fairtrade City.

The banner is particularly significant as it is two-sided, with one side having bunting made by schools and community groups and signed by Limerick City Councillors.

Dolores O’Meara, Chair of Fairtrade Limerick said: “It is our pleasure to hand over these Fairtrade objects to Mayor Butler for the People’s Museum. Sr Rosetta, Sr Eilish Moloney, Sr Delia O’Connor and others worked in developing countries and saw the need for these communities to trade their way out of poverty.”

A number of Fairtrade objects, commemorating Limerick City’s 16th birthday as a Fairtrade City, have been presented to the People’s Museum by Mayor @DanielButlerFG https://t.co/zVoUE6QmF3

“The Fairtrade initiative is community focussed and provides farmers with the opportunity to do that. Like the rest of the world, these communities have been challenged in the last year by the Covid virus and, in particular, by climate change.”

“Coffee farmers, cocoa farmers and banana farmers have had to contend with either drought or hurricanes which have destroyed their farms. It takes four to five years for a cocoa plant to produce fruit so there are many lean years before they have cocoa beans to sell again. The need for Fairtrade is ongoing and we, in Limerick, can play our part in two ways: firstly, by remembering to buy Fairtrade items when we shop and also, by playing our part in combatting climate change.”

David O’Brien of Limerick Civic Trust said: “It is always wonderful to be considered to accept these objects, it is an endorsement of our efforts. The Limerick Civic Trust, have for many years, since Denis Leonard’s early days, had an ambition to gather artefacts that tell the very colourful story of Limerick and its people. It is through objects like these that allow us tell the story and fulfil one of our many aspirations for the betterment of Limerick.”

“During the pandemic, we are so proud of the work that was put in to the People’s Museum and also to the opening of our second museum, The Wild Geese Museum in St. Munchin’s Church. Civic pride in action is our slogan, as we work to restore, maintain, and promote the historic street environment and built heritage of our great and ancient city.”

Meadhbh Nolan, the People’s Museum of Limerick added: “We are thrilled to host the Mayor of Limerick and the Fairtrade Committee at the People’s Museum, as Limerick celebrates its 16th Fairtrade Birthday. Having spent much of 2020/21 in lockdown, we have worked hard behind the scenes to improve our museum experience, and these objects being presented to us will make a wonderful addition to our varied exhibitions. As a relatively new museum in Limerick, it has been a tough two years, but we are thankful that we are still here providing a space to Limerick artists and musicians, all while promoting Limerick’s history.”

Choosing Fairtrade means that you care how the product was produced, who produced it and what benefit they get. Fairtrade encourages us to look behind the brands, the messages and get to the real story behind the product.

There are over 1.7 million producers, farmers and workers spread across more than 75 countries in the world participating in Fairtrade with sales in 2017 reaching US$9.2 billion.

Limerick City was awarded status as a Fairtrade City in 2005 thanks to the concerted efforts of local people to ensure that Fairtrade produce was made widely available. It shows Limerick City’s commitment to supporting a fairer trading system with developing countries.

Further information on how the Fairtrade programme operates is available HERE

Excitement for Pupils and Parents as Glenroe School refurbishment completed