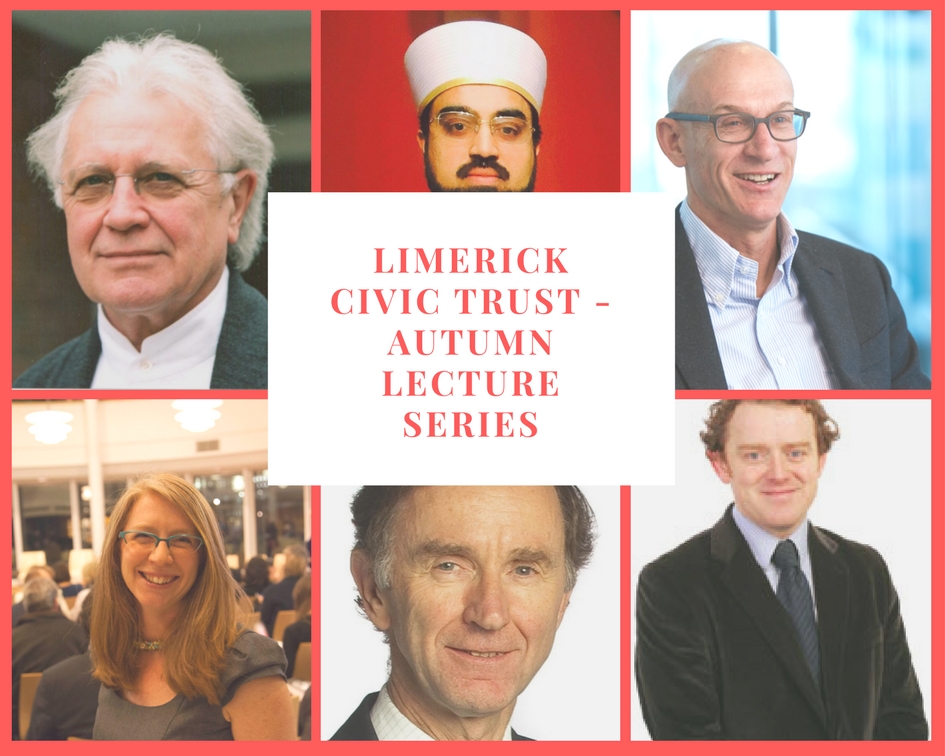 The Limerick Civic Trust is delighted to be bringing back its Autumn Lecture Series this September which will take place in the unique setting of St Mary’s Cathedral, Limerick.

The event is in conjunction with the Kemmy Business School, Shannon Chamber, Limerick City & County Council and Roadbridge is a six-part series of public lectures to be delivered by internationally renowned commentators and thought leaders in their field.

The opening lecture of the Autumn Lecture Series is booked for the 14th of September and will be followed by a series of lectures over the following Thursday evenings.  This year the following speakers have been confirmed:

Stephen Green was educated at Lancing College, Sussex, and at Oxford University where he graduated in 1969 with a BA (First Class Honours) in Politics, Philosophy and Economics.  He also obtained a Master’s Degree in Political Science from the Massachusetts Institute of Technology in 1975.

Lord Green began his career in 1970 with the British Government’s Ministry of Overseas Development.  In 1977, he joined McKinsey & Co Inc., management consultants, with whom he undertook assignments in Europe, North America and the Middle East.

He joined The Hong Kong and Shanghai Banking Corporation in 1982.  In 1998, he was appointed to the Board of HSBC Holdings plc as an Executive Director.  He became Group Chief Executive in 2003 and Group Chairman 2006.  He retired from HSBC in December 2010.

He is Chairman of the Natural History Museum, Chairman of Asia House and President of the Institute of Export.

The Shaykh was born in a scholarly family with his father being the famous scholar Shaykh Mehr Ali Qadri. Shaykh Umar Al-Qadri was brought up in the Netherlands before travelling to Pakistan for traditional Islamic education along with Secular education. He completed his Masters (Shahadah Al-Alamiyyah) in Islamic Sciences from Jamia Islamia Minhaj-ul-Quran.

The Shaykh is a gifted and prolific speaker and his lectures are shown globally. Shaykh Umar Al-Qadri lectures regularly in various Irish mosques, Muslim community centres, colleges and universities including the Irish School of Ecumenics about Islam and contemporary issues.

The Shaykh has led the Muslim Community in Dublin since 2004 and represents the Muslim community in Ireland in various governmental and non-governmental bodies and organisations, Shaykh Al-Qadri is the Founding Chair of Irish Muslim Peace & Integration Council, an NGO promoting Peace and Integration in Ireland. The Shaykh is also the Founding Member of Irish Council of Imams.

Jodie is Chief Executive of Index on Censorship, an international non-profit organisation that publishes work by censored writers and artists and campaigns for free expression worldwide. A former foreign correspondent and business journalist, Jodie worked for more than a decade for Reuters news agency in South Africa and Ireland and as Reuters’ Bureau Chief in London. In 2012, Jodie set up the Reuters ‘press gang’ initiative – a journalism workshop for young people in the communities around Canary Wharf. Jodie has also worked as Head of Communications for Camfed, an education charity that supports girls and young women in Africa through education and at think tank Demos.

Simon Carswell is a Correspondent with The Irish Times. He was the newspaper’s Washington Correspondent from 2013 to 2017 covering Barack Obama’s second term in the White House, the 2016 US presidential election and the rise of Donald Trump. Prior to his move to the US, he was Finance Correspondent from 2007 to 2012, reporting on the Irish financial crash and economic crisis. He was named National Journalist of the Year 2011 by the National Newspapers of Ireland for his coverage of the crisis. He is the author of Something Rotten: Irish Banking Scandals, published by Gill & Macmillan in 2006, and Anglo Republic: Inside The Bank That Broke Ireland, a bestseller published by Penguin Ireland in 2011. Since returning from the US he has reported on Brexit, the UK general election and the terror attack on the Manchester Arena. He previously worked at The Sunday Business Post from 1999 to 2007 where he was News Reporter and News Editor. He grew up in Limerick and attended Crescent College before moving on to Trinity College Dublin where he studied history and Dublin Institute of Technology where he received his Masters in Journalism. He is a regular contributor to television and radio.

“On the Rim of Reason: The pulse from edge to the centre and out again”.

Ian is Visiting Professor of Architecture Liverpool University; Governor of the RSC, and advisor to The Ove Arup Foundation, and Backstage Trust.

He has chaired many international juries including the RIBA Stirling Prize, RIAS Doolan Award and Les Jeunes Albums for the French Government Ministry of Culture.

His practice’s architecture has been shortlisted four times for the RIBA Stirling Prize and the Mies Van der Rohe EU Prize and received over 70 major awards.

He is the recipient of two major innovation Awards – Robert Matthew Commonwealth Award and the French Académie d’Architecture Grand Silver Medal, has written several books and his art is held in several international galleries and museums.

Over the past 30 years, he has lead major property development projects in several towns and cities and is going to talk to us about his experiences of working with political leaders, public sector administrations and communities. ‘Changing the physical environment is a privilege, changing the social, environmental and economic nature of those places comes with responsibility’.

Roger has been involved in proposals and projects in Edinburgh, Manchester, Birmingham, Bristol, Reading and London. He is best known for being the CEO of Argent Group PLC which was selected in 2000 as the developer for 67 acres of railway land between and to the north of King’s Cross and St. Pancras Stations. The largest city centre development project in Europe. At British Land where Roger joined in February 2016, he has found a FTSE 100 company quietly doing and very much supporting much of the good community and environmental work that he had promoted at Argent.

Tickets can be purchased at www.eventbright.ie and will also be available on the door. All proceeds from the Autumn Lecture Series will go towards the Limerick Civic Trusts development of St. Munchin’s Church into a museum.