By Richard Lynch on September 9, 2015@richanthon 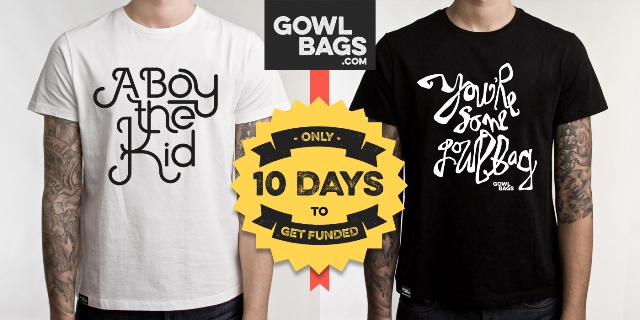 Gowlbags started in 2011 as the pet project between a few friends from Limerick.

There is just over one week left for the people of Limerick and Ireland to pledge their support HERE in order to expand this Limerick company and allow them to go ahead with their production of Gowlbag merchandise. The way fundit works is that it’s all or nothing. If Gowlbags don’t hit their target, they get nothing and as a result, nothing gets printed. There are eight days left in the campaign to help make this creative, original idea a reality.

Each Gowlbag is 100%  organic cotton, woven tote bag. Printed using water-based inks  and chemicals that are soya-based and earth friendly. There are two custom designs to choose from, they cost €13  and that price includes P&P to anywhere in Ireland.

The Gowlbag tees are printed on  100%  Cotton ringspun preshrunk jersey knit and use the same water-based inks  and soya-based chemicals as the totes, resulting in high  quality prints that will stand the test of time without destroying the planet. They cost €22  and the that price includes P&P to anywhere in Ireland.

There’s also a small number of Gowlbundle’s available (€70) which include a Gowltee, a Gowlbag, Gowlbadge pack, stickers, framed certificate of Gowlliness and a very limited edition postcard set. P&P is also included.

They say: “We registered the Gowlbag domain, set up  a facebook page, a twitter profile and mocked up  a few ideas of what a “Gowlbag” might look  like. Then nothing much happened for a while. Skip forward to June 2015 and out of the blue, the Gowlbags facebook page started gathering momentum. People started liking the page, tagging friends and commenting. We were totally unprepared. People started asking “Where can I get these?”  We quickly realised, we needed to try to make these things.”

“Gowl” is a word of Limerick origin meaning “an unreasonable fool”. Gowlbag is a play on this word and the merchandise is the creative idea that has resulted in a Fundit campaign that you can help out with!

“Because we weren’t totally certain of the demand for Gowlbags, we decided the best way proceed was to run a funding campaign through Fundit.ie. This would allow people to pledge their support by pre-ordering a tote or a tee and also allow us to be able to make quality merchandise rather than just lashing out sub-standard tat because it was cheaper. The first run of gear will consist of a limited edition of 200 Gowlbags and 200 t-shirts.”

We launched the campaign, created an introduction video, designed the bags and the tees. We made stickers, designed packaging and built a holding page for the site (with a full site currently in development for Gowlbags 2.0) things started to come together.

“Everyone who funds the first wave will become a “Founding Gowlbags” and have their nameadded to the “Hall of Gowlbags” on  our new website, when it launches. In addition to their reward, they’ll get a discount voucher to use against any future purchases they may make.”

The support on  facebook has been amazing, so many people seem to get a laugh out of the idea and at the end of the day, that’s what it was meant to do.

With less than 10 days left in the campaign the Gowlbags crew are still hoping they can reach their goal. “There’s a long  way to go, sure, but as we said on  facebook earlier today, we love a challenge in Limerick. We love defying the odds, being the underdogs and snatching victory from the jaws of defeat so hopefully we can get there, but we need the help of the people. For us, this is only  the tip of the iceberg as far as Gowlbags is concerned. We have lots of fun  ideas that we’re sure people will love but for us to be able to make these ideas happen, we need to get funded.”