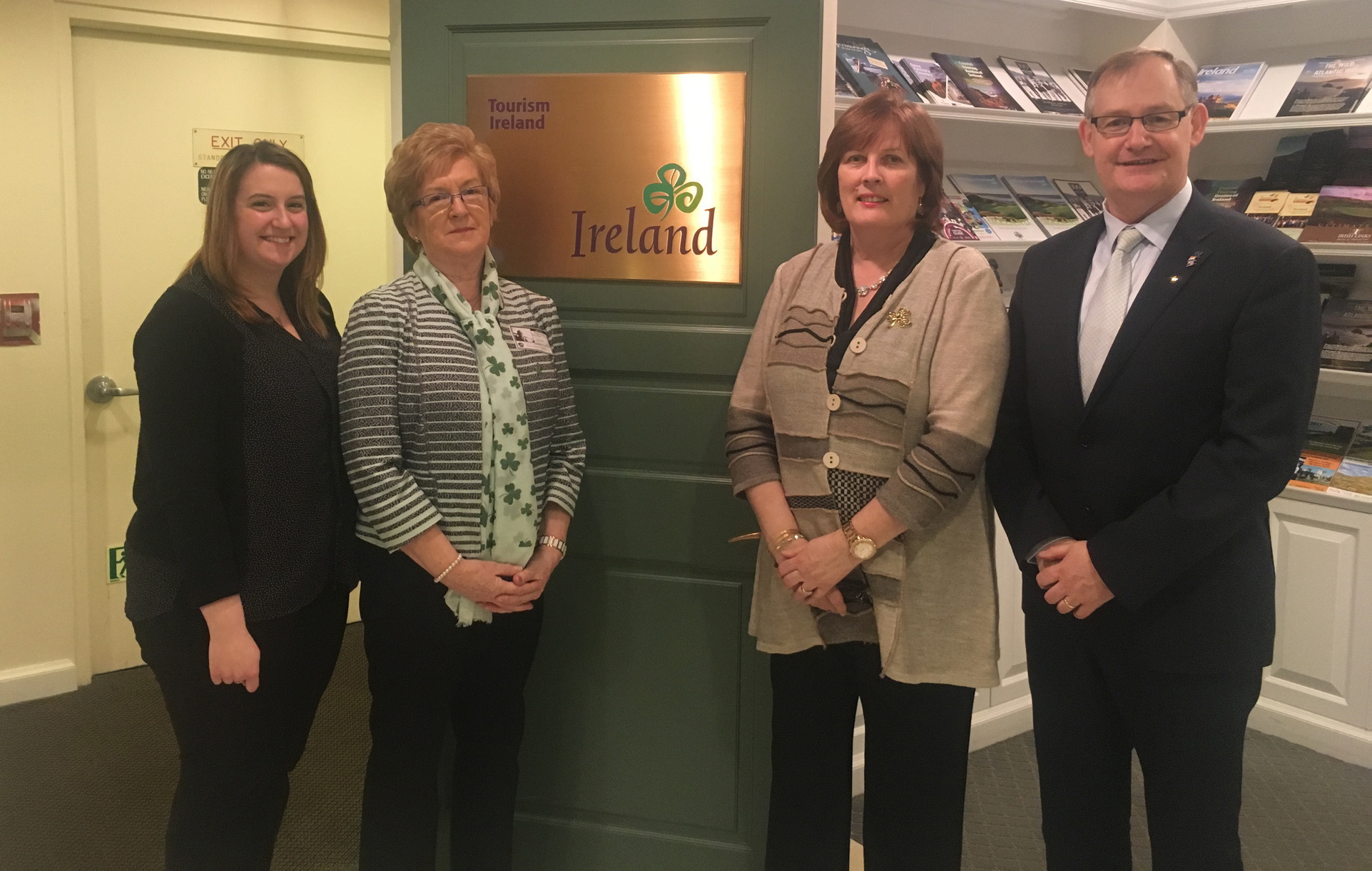 Representatives of Limerick City and County Council, who are in New York for the St Patrick’s Day period, met with senior executives from Tourism Ireland in New York. They were briefed on Tourism Ireland’s extensive promotional programme for 2017, which is in full swing right now.

Tourism Ireland aims to build on the success of 2016, which was the fourth record-breaking year in a row for Irish tourism from the United States. Tourism Ireland is prioritising North America this year, as a market which offers a strong return on investment, in terms of holiday visitors and expenditure. Our important ‘culturally curious’ and ‘social energiser’ audiences are being targeted with distinctive vacation experiences, events and special offers tailored to their interests. Tourism Ireland is creating ‘stand out’ for the island of Ireland in the US, highlighting experiences like the Wild Atlantic Way, the Causeway Coastal Route and Ireland’s Ancient East. Promotions aim to grow travel to the regions of Ireland, during the shoulder and off-peak seasons. Limerick delegation visits Tourism Ireland

With the recent announcement by Norwegian of new flights to Ireland from New York (Stewart International Airport) and Providence (Rhode Island), the total number of transatlantic airline seats this summer will be 60,000, from 20 North American gateways to the island of Ireland – that’s 10,000 additional seats (+20%) compared to summer 2016.

Alison Metcalfe, Tourism Ireland’s Head of North America, said: “We were delighted to meet with the representatives of Limerick City and County Council and to have the opportunity to brief them about the extensive promotional programme we are undertaking in the United States this year. Our ambition is to surpass the record-breaking performance of 2016 and to deliver a +9% increase in revenue and a +6% increase in visitor numbers from North America in 2017 i.e. €1.6 billion generated by 1.7 million visitors.

“St Patrick’s Day traditionally marks the real start of the tourism season for us; our aim is to bring a smile to the faces of people everywhere and to convey the message that Ireland offers the warmest of welcomes and great fun, as well as wonderful scenery and heritage. We are using every opportunity to capitalise on Ireland’s heightened profile this week; the saturation coverage about Ireland at this time of year – across the airwaves, in newspapers and digital media – is an invaluable boost for our overall tourism marketing drive in 2017.”

Over the coming days, Tourism Ireland will participate in and promote the island of Ireland at a range of St Patrick’s Day events across the United States. For the first time ever, One World Trade Center (the main building of the re-built World Trade Center complex in New York and the tallest building in the Western Hemisphere), La Concha Visitors Center at the Neon Museum in Las Vegas and the fireworks show at the Plaza Hotel & Casino, also in Las Vegas, will participate in Tourism Ireland’s Global Greening initiative to celebrate St Patrick and Ireland. Other major landmarks to be illuminated in green include the Empire State Building, the ‘Welcome’ sign in Las Vegas and the world-famous Niagara Falls.

And Chicago will be going all out to celebrate St Patrick and Ireland once again this year, with numerous buildings and sites across the city ‘seeing green’ – including Navy Pier, the John Hancock Center, the Civic Opera House, the Wrigley Building, Novak Construction, Sheraton Grand Hotel, State Street, Chicago Gaelic Park and One Prudential Plaza, as well as the Irish American Heritage Center, which joins the initiative for the first time. Limerick delegation visits Tourism Ireland

Photos: Limerick celebrates St Patricks Day 2017 with a feast of fun and entertainment