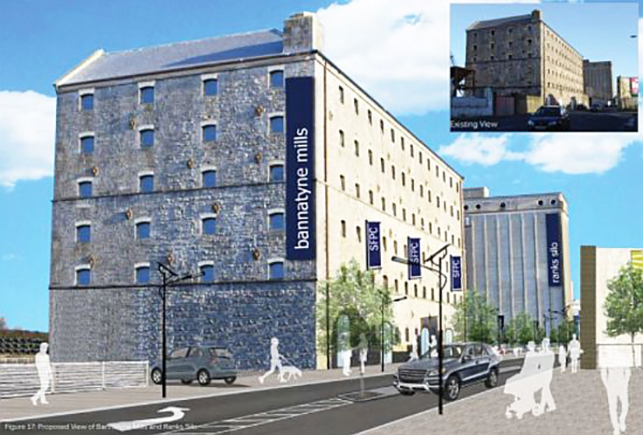 Limerick Docklands Development Plan – at the centre of the plans is Bannatyne Mills, which will be developed into a commercial hub. Pictured above is the mock-up of what the Mills is proposed to look like upon completion.

The €100 million investment in the Docklands will create 1,000 jobs

It has been requested that the Limerick City and County Council invite the chief executive of the Shannon Foynes Port Company (SFPC) to update the local council on their plan for the Limerick Docklands.

Joe Leddin, a councillor for the Labour Party expressed his interest in wanting to know more about the planned redevelopment of the former Bannatyne Mills building.

Daniel Butler, a Fine Gael councillor, supported this motion at the September Metropolitan District meeting. Cllr Butler described the port as being a very important part of the city and significant infrastructure.

Cllr Butler said, “This is a huge opportunity, when it is delivered, especially on a commercial front. It will further expand and deliver access to the river”

The €100 million investment in the Limerick Docklands will lead to the creation of 1,000 jobs, here in Limerick.  The main focus of the new strategy is to transform the prime 110-acre site in the heart of the city centre.

The Limerick Docklands Framework Strategy focuses on creating an economic hub on the 75 acre development space, and also increasing commercial activity at the Ted Russell Docks.

It also wishes to move the vehicle entrance further down Dock Road in order to manage traffic and the development of the Bannatyne Mills.

Shannon Foynes Port has embarked on a programme to transform the extraordinary Bannatyne Mill building at the Dock, from a disused grain store into what will be a stunning commercial property that can be used as a work location.

The project will see its redevelopment delivered in a way that retains the rare and rustic architecture of the historic building and yet transform it into a modern office space ideal for the services sector and capable of accommodating up to 430 employees.

The 3,000sq/m Bannatyne Mill, which was built in the late 1800s, is a detached eight-bay, five-storey limestone former corn store that looks out onto the Limerick Docks and the River Shannon.

The Mills has some unique features as its frame is made of cast iron and holds an impressive amount of high standard of detail.

The project will involve conservation, restoration, and new works to Bannatyne Mills, including significant internal modifications. However, the company ensures that they will pay absolute respect to its industrial rugged charm which makes it so special.