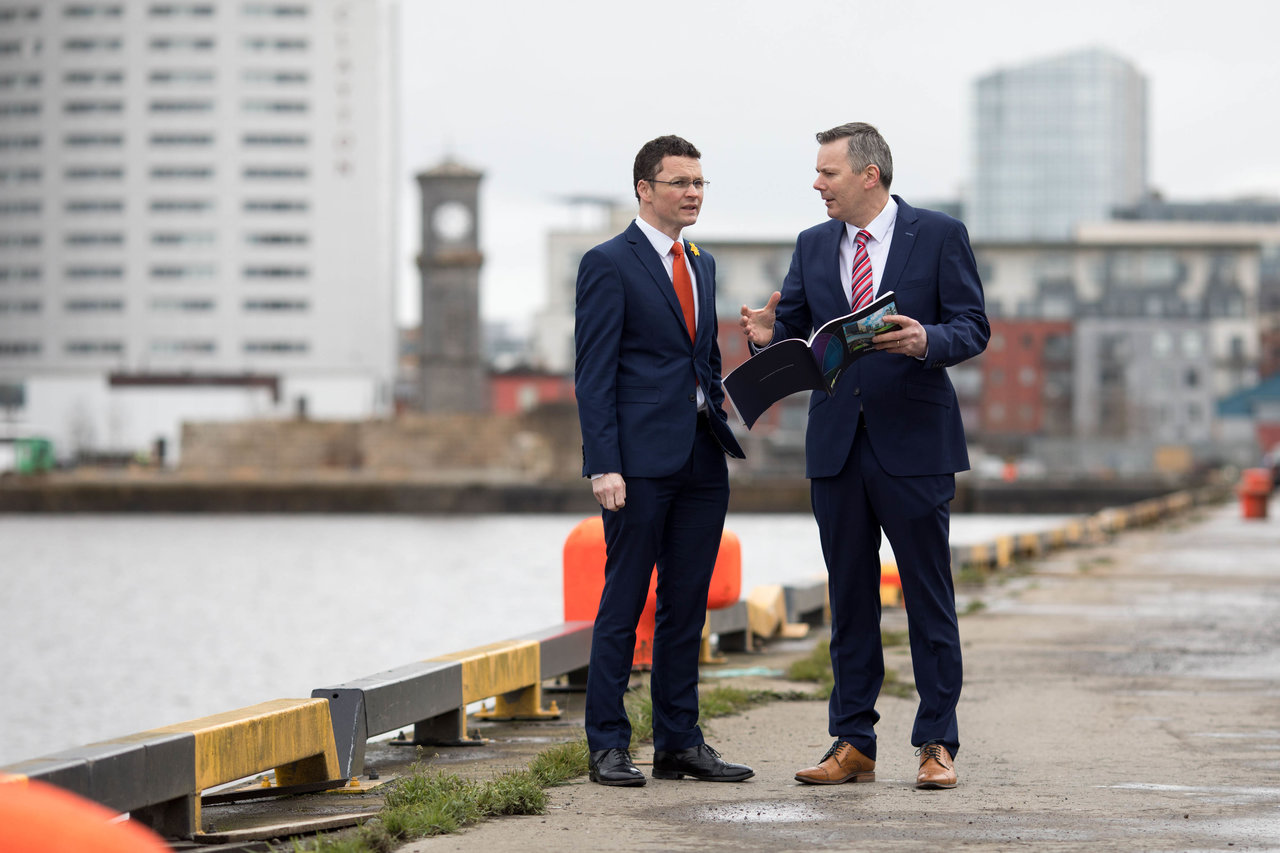 The Limerick Docklands Framework Strategy was launched by Minister of State at the Department of Finance & Public Expenditure & Reform Patrick O’Donovan with a pledge to grow existing commercial activity at SFPC’s 35acres Ted Russell Docks but also provide for the major development of noncore activity at the docks and also at lands along a further 75acres of the Limerick Docklands estate.

The potential of the ‘Limerick Docklands Economic Park’ (total 110 acres) is emphasised by its location just off both the M7 Motorway at its western end and Limerick City Centre at its eastern end, with much of the development potential ideal for ‘last mile logistics’ investment. The assets earmarked for development include disused buildings and greenfield land-banks that are surplus to the operational requirements of the thriving Ted Russell Docks.

The docks have been and will remain the core SFPC commercial activity at the Limerick Docklands estate, which extends 2.15km along the River Shannon waterfront. However, the Framework Strategy is the first time that noncore assets will be explored for their commercial potential in a programme that will attract significant inward investment and potentially in excess of 1,000 jobs.

Currently, a total of 440 Full-Time Equivalents (FTEs) are supported by the Ted Russell Dock, generating €25.2 million in employment income among companies engaged with SFPC. The commercial activity of customers of Ted Russell Docks resulted in €77.2 million of expenditure in the regional economy on non-labour goods and services.

SFPC estimates that the programme, which will run for the lifetime of its Vision 2041 Masterplan, could involve a minimum of €100m of development and redevelopment, potentially delivering 75,000sqm of new and existing buildings at the Ted Russell Docks, Corcanree Business Park and other sites off the Dock Road.

The company has already had discussions with a number of potential partners on individual projects within the wider scheme with a view to enabling works commencing on initial projects as early as 2019.

Launching the SFPC report before an attendance of over 100 regional stakeholders, Minister O’Donovan said that the Limerick Docklands Framework Strategy has the capacity to unlock one of the most attractive land-banks yet to be developed in urban Ireland.  “Limerick Docklands ranks among the most attractive urban sites in the country. This property is flanked by the largest river in either here or the UK and is effectively bordered by the city centre at one end and a motorway at the other.  It has its own port achieving record tonnages and is just 25 minutes away from an international airport.  From an investment potential this is a hugely compelling offering and now that it has a framework in place, it is an open invitation to indigenous and FDI companies to take advantage.”

An essential enabler of the programme will, SFPC says, be a realignment of access for heavy goods traffic to the western end of the Ted Russell Docks itself to allow for the development of non-core assets at the docks, starting with the 3,000sqm Bannatyne Mills, where today’s launch was held.  The Mill, a stunning and iconic building from early 19th-century port activity, is earmarked for a multi-million euro transformation into a commercial hub that could be home to up to 300 employees.

The rehabilitation of the building, along with the nearby Ranks Silo building, and relocated access will also deliver significant public realm enhancement on the dock road, adding further momentum to the wider physical renaissance of Limerick city.

Other elements will include:
Relocation of internal operating facilities from the eastern end of the Docks to the western end, resulting in land reorganisation within the operational port that will deliver an overall net gain of 0.38 hectares
The eastern end of the port adjoining James Casey Walk has suffered from a number of inappropriate interventions over the years and following a detailed conservation assessment of the buildings, features and the area, it is proposed to
Visually enhance the setting of the cluster of heritage buildings at the eastern end of the port adjoining James Casey Walk through the demolition and removal of insignificant buildings and features
Redevelop the 15-hectare Corcanree Business Park at the western end of the Docklands with the option of providing a direct, internal connection, potentially along the riverbank, to the operational port without reliance on the Dock Road
Whilst each piece of land and each structure within the Docklands can operate in isolation, the Framework Strategy also provides for the promotion of the area as the Limerick Docklands Economic Park with a focus on business, technology and marine energy uses and testing.

SFPC CEO Patrick Keating said that “The key objectives of this strategy are that we have a viable working port at Ted Russell Dock, better transport and access to the operational port and a commercial return on the non-core assets which are surplus to port operational requirements.  The development potential of 31 hectares between the city centre and motorway is enormous.  Its job creation potential is huge and it will, therefore, be one of the key economic catalysts for Limerick and the region in the years ahead.”

He continued: “Unprecedented economic gain has been achieved in this city and region over the past five years thanks to a spirit of collaboration across all key stakeholders.  Delivery on this Framework Strategy will only be possible with that collaboration and we look forward to working closely with Limerick City and County Council and others to ensure that we maximise this vast opportunity for Limerick and the region.”

Said SFPC Chairman David McGarry:  “The Ted Russell Docks have been the centrepiece of the company’s commercial enterprise here since its foundation but the Framework Strategy is the first time that we have sought to maximise noncore activity.  We will do so in the best interest of our shareholder, the government, and the city and region.  But we will also do it in a way that supports existing port customers and ensures any future development respects the ecological value also of the Docklands.”

SFPC is Ireland’s second largest port operation currently handling in excess of 11.3 million tonnes per annum with the value of trade handled at €7.6 billion. SFPC port activities are significant in the context of the local economy and the region with the economic impact of all SFPC port-related activity on the local economy estimated to be €1.9 billion in 2014, supporting 3,372 FTE’s.  The regional economic impact of SFPC and associated service providers is also significant and was estimated to be €95.8 million per annum.

For more information on the Limerick Docklands Framework Strategy from the SFPC, click here

For more stories from I Love Limerick regarding the SFPC, click here