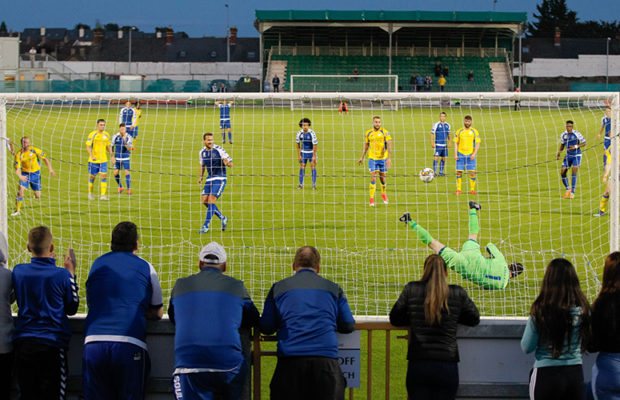 Limerick FC lost a vital three points on Friday night when they were beaten by ten-man Finn Harps in the SSE Airtricity League Premier Division at the Markets Field.

The home side were on the front foot from the first whistle, with the first chance of the game coming eight minutes in when Bastien Héry was fouled from 20 yards out as he shot. Lee-J Lynch played it short to Tosi whose bending effort took a deflection off the wall.

20 minutes in Lynch’s cross towards the box found Blues skipper Shane Duggan, whose half volley went inches over the top right corner. Shortly after Limerick were denied again when Lynch’s shot from the right was saved by Harps keeper Ciarán Gallagher.

The match looked to be Limerick’s for the first half hour as they created the majority of the scoring opportunities in the first thirty minutes.

Then, totally against the run of play, Harps broke the deadlock with six minutes left in the first half. Harps’ striker Eddie Dsane had his shot saved by Limerick keeper Brendan Clarke who could not do anything about Tommy McBride’s follow up inside the six-yard box.

Just as the teams were getting ready to head into the locker rooms for halftime, Tony Whitehead’s long through ball found Peter Berki in the box before he was dragged down by Killian Cantwell who was immediately sent off.

Limerick’s Brazilian striker Rodrigo Tosi stepped up to the spot to take the penalty but he was denied by the upright and the first half whistle was blown.

Limerick struggled to take advantage of the extra man coming out of the break with their first chance of the half not coming until the 60th minute when Héry’s shot from the edge of the box flew over the bar.