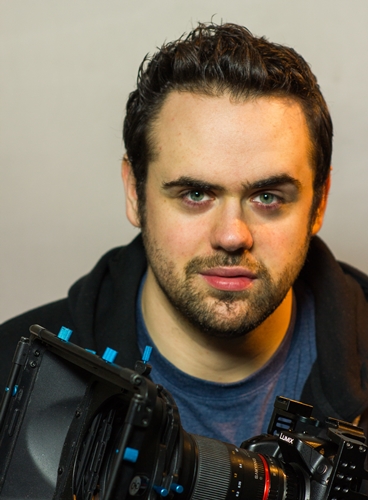 Limerick film maker Stephen Hall’s passion and love for story telling came from a very young age. Steve’s mother bought him his first camera which he used with his friends to make horror movies in the woods as a child. Since finishinig a B.s.c. Hons in Video and Sound, Steve has written and Directed many projects for the festival circuit and for Irish Television, most recent of which being the international and award winning SINNERS. Coming from a cinematography and visual effects background Steve has a unique eye for visuals.

In his final year in college, Steve began teaching film-making while he wrote, directed and shot his thesis film. This film was then optioned for a television pilot for the national broadcaster RTE.
Stephen is hot off the heals of Directing  Dawn Bradfield (KING ARTHUR, THE CLINIC) and Joe Mullins (PILGRIM HILL, GLASSLAND) in the forthcoming Gerry Stembridge produced DAY OFF for RTE.

Speaking to Steve he admitted that his “true passion is directing and cinematography, I love to create something that I can only see in my mind and allow it to channel through me to others”.

Steve loves “high concept”, he creates stories that push the boundaries of genre and has a visual flare that draws you in and holds you there.  High concept gives Steve the chance to “create something that is not your everyday situation, something out of this world”.

Steve’s latest film SAFE has been selected for the Cannes film festival. SAFE is a short film about a chance encounter in the harshest of times, where one man’s fight to survive is met with one man’s dying wish. It’s been 2 years since the fall of civilization. Joe has learned the hard way to stay away from the cities and must travel through the most deserted Irish countrysides. His search for clean water and food is interrupted by a dying man, Pete, who is left for dead by the ‘bad ones’. Joe must learn to trust Pete as he is tasked with taking his wife home.

The Limerick Resource Centre for the Unemployed