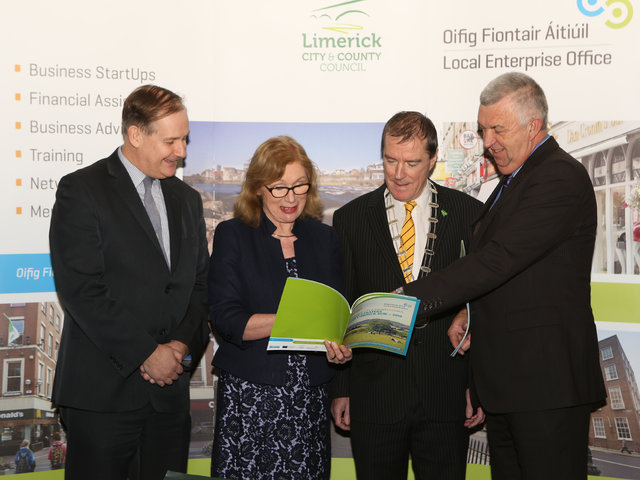 A new scheme named Limerick Food Strategy seeks to strengthen Limerick’s efforts to achieve Food Destination Status over the next three years. The initiative was launched on Monday, February 8, 2016, by Ms. Jan O’Sullivan T.D., Minister for Education and Skills.

With a strong focus on the food sector and new commercial activity, it is projected that up to 86 new jobs will be created by the end of 2018.

The Strategy was researched and compiled by James Burke and Associates through stakeholder interviews on behalf of the Local Enterprise Office Limerick, and was co-funded by Limerick City and County Council, the Government and the European Union (EU).

“The breadth and scale of activity on going in the local food sector will be complemented by the launch of the Limerick Food Strategy,” stated Minister O’Sullivan.

Jan went on to say that, “The Irish food landscape has changed dramatically over the last decade with significant growth recorded in new producers starting up, food exports exceeding €10.5 billion for the first time and a general focus on locally sourced food on menus in restaurants and hotels. The food tourism sector has also grown considerably with many visitors to Ireland citing the food experience as one of the outstanding features of their time in Ireland.”

“Confidence is everything in any sector. Therefore, I would hope that this Strategy and its recommendations would energise the local food community and give food producers and suppliers the confidence to invest in and grow their businesses and help achieve Food Destination Status for Limerick,” said Minister O’Sullivan.

Welcoming the launch of the Strategy, Cllr. Gerald Mitchell, Deputy Mayor of the City and County of Limerick said, “Food producers have been a staple part of community life in Ireland for many decades. They have been important contributors to the economy and it is only right and proper therefore, that they are assisted in their efforts to maintain and grow their respective businesses.”

“By harnessing the shared, community-wide passion for this region’s unique food produce, my hope is that this strategy will guide Limerick in establishing itself as a quality food destination and as a quality location to set up a new or to expand an existing food business,” added the Deputy Mayor.

Research conducted during the preparation of the Strategy indicated that Limerick had many strengths in its food sector including the improved diversity in Limerick’s food offering in recent years, a growing food producer base, new emerging food festivals and new enthusiasm from food stakeholders. The research also highlighted some weaknesses including a small number of speciality producers and the absence of “joined up thinking” with regard to developing the food sector.

The three-year strategic plan identified new opportunities for growth in the sector including a food brand for Limerick, a food tourism link to the Wild Atlantic Way, up skilling the sector, a strong marketing plan for Limerick, securing strong interest from many stakeholders in the establishment of a food strategy and harnessing the expertise which was gained during Limerick City of Culture in 2014.

Conn Murray, Chief Executive of Limerick City and County Council said the implementation of the recommendations in the report is “vital to the development of the food sector in Limerick and in order to realise the job creation potential of this sector.”

He continued, “Limerick city and county has seen its food landscape evolve in recent years with a greater number of award-winning restaurants and hotels and steady growth in new producers emerging. There are several food initiatives throughout the city and county, which have as their core objective showcasing of Limerick Food. The Council, through this food strategy is seeking to support existing initiatives and seek to create an environment to foster the strategic growth of the food sector and its related stakeholder groups.”

“I would like to congratulate Eamon Ryan, Head of Enterprise, the staff of the Local Enterprise Office, James Burke and Associates and the Mayor and Councillors of Limerick City and County for completing and adopting this very important strategy document,” said Mr. Murray.

A full copy of the report from the Limerick Food Strategy can be downloaded from the Local Enterprise Office Limerick website.

Get the full report here

Check out other great work happening in Limerick here