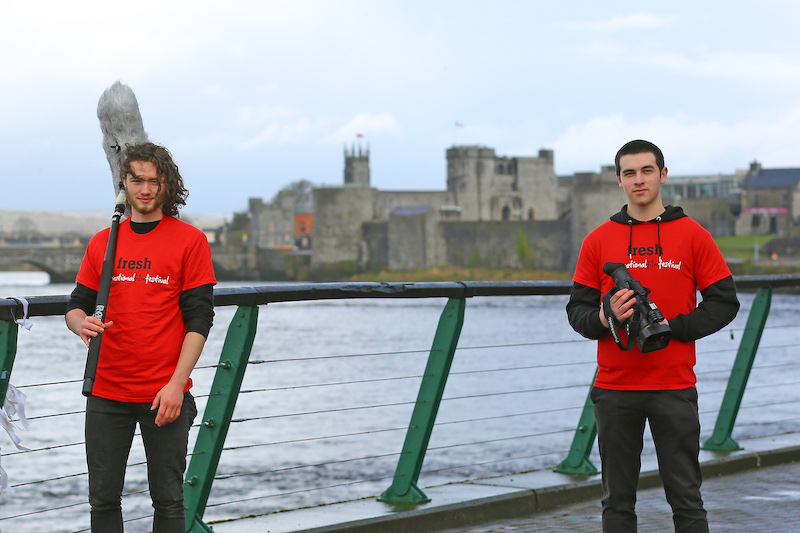 Ireland’s Young Filmmaker of the Year 2021 has moved one-step closer to crowning its winners by announcing its Limerick Fresh Finalists 2021. The competition announced which short films would move on to the finals at its regional heats which took place online this year.

Among the Limerick Fresh Finalists 2021 was 18-year-old filmmaker Shane Joyce from Mungret, Co. Limerick with his film ‘Coffee Break’, a dark dystopian story about a computer who controls an employee to make him work harder. Shane said, “This year I entered my short film ‘Coffee Break’ into Fresh Film. I made the film under 72 hours by myself in my bedroom during the first lockdown. The film is about daily routine of everyday being the same which is kind of related to the film Groundhog Day, spending every day at a desk and the effect that has on you. I made the film during lockdown and I made it myself, I was acting in it and editing it myself in my room.”

He added, “It’s my second year entering Fresh and it is an opportunity and a chance to as a young filmmaker to meet other people who have the same interest as me, so it gives me a place to get my film seen, and to meet people. I guess moving forward I want to be able somehow to make a living making films and being creative.”

Also through to the final was 17-year-old Cian Rowley from Pallaskenry, Co. Limerick with his film ‘Painting’. Cian commented, ‘My film is experimental and is about how people perceive things which is what I was going for, it’s an interaction between two people who have never met each other and how you perceive strangers and how they interpret what they are doing. Covid impacted my film because I couldn’t get any actors for my film, so I had to paint my Dad in blood, and had to film at 2am and without equipment as I had to film with my phone, it wasn’t simple but went better than expected.”

He added, “This is my first time entering the Festival. It is just a really good way to get into film, if you like film and if you’re passionate about it, Fresh Film is a great way as it encourages you to make something, and that’s really what I wanted to do. I’ll keep making films and see where it takes me, I like it so I’ll just keep at it and see where I go with it.”

Also through to the finals is ‘Soapbox’ from Limerick Youth Theatre. ‘Soapbox’ was filmed at the beginning of Taoiseach Micheal Martin’s tenure and the theme centres on what leadership means to young artists. The film was a project born of necessity and unbridled stubbornness. When Covid scuppered plans for the annual Limerick Youth Theatre Summer Production, members put their heads together and developed a unique idea. With 30 young artists LYT have combined verbatim/documentary theatre with the idea of a large-scale Story Exchange inspired by the work of Narrative 4, an organisation who use art and storytelling to build empathy between students. Via Zoom and WhatsApp, members shared beliefs, frustrations, and personal stories through the framework of the15 Ministries of the newly formed 33rd Dail.

.@stephenbyrne & @JustineStafford announce the finalists through from our Day 2 heats. Congrats! Your films will be screened next week as part of Fresh International Film running March 22-28!#freshfilm25 #freshfilm pic.twitter.com/nPmMM5MqzN

Other Limerick films through to the finals include ‘A Beautiful Mess’ by Cian O’Sullivan who attends the school Scoil Mhuire agus Ide and ‘A Part’ by Rachel Sheil from Limerick Youth Dance Company.

All the films shortlisted for the final will be screened at Fresh International Film Festival 2021 which takes place online this year from Monday, March 22 to Sunday, March 28 and features an alumni showcase and a week of film screenings and workshops with the Ireland’s Young Filmmaker of the Year Junior Finals taking place on Thursday, March 25 and the Seniors Finals on Friday, March 26 via a YouTube live stream with presenter and documentary filmmaker Stephen Byrne and comedian and social creative Justine Stafford hosting this year’s awards.

Jayne Foley, Founder and Artistic Director of Fresh Film said, “The films entered this year in the Festival are a glimpse into how young people in Ireland are dealing with the challenges of the pandemic. Films are a powerful form of expression and an effective way to educate, create awareness, improve understanding and encourage action. Lockdowns during the pandemic have forced young people to come to terms with a new way of living life. What surprised me about this year’s crop films was how positive the films were and how resourceful young people can be. This year’s Festival is introducing the world to a new generation of young film innovators highlighting how they are living and coping with global health issues.”

All has changed in the world of film festivals post-Covid-19, and Fresh International Film Festival (March 22-28) is going digital for the second year running as it celebrates its 25th anniversary of giving young filmmakers a platform to shine. Fresh Film encourages young people to make films by hosting the annual Festival, which invites young people from Ireland and overseas, aged 7 to 18 years, to create, exhibit and share films and compete for Ireland’s Young Filmmaker of the Year. All films submitted are also considered for a range of Specialist Awards.

Thousands of people tune in for Limerick St Patricks Festival 2021