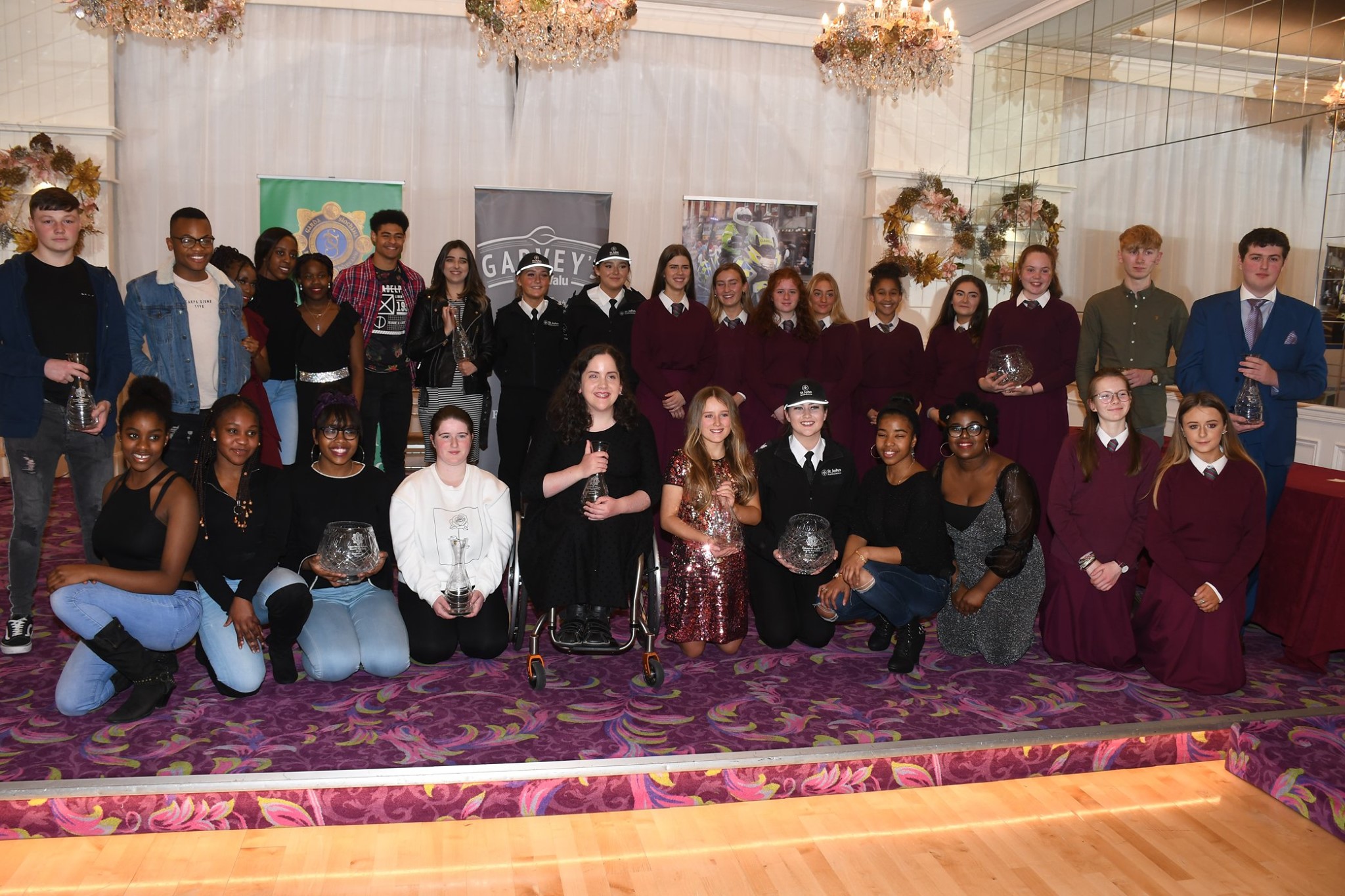 Limerick Garda Youth Awards 2019 took place at the Woodlands House Hotel on Thursday, November 21. The awardees were presented with trophies of cut crystal.

This event is annually organised by the Juvenile Liaison Office at Mayorstone Garda Station. Over 150 guests attended a gala dinner where awards were presented to seven individuals and three groups.

Each had won their award for a variety of activities among their schools and communities and for overcoming challenges they have faced during their lives. The awardees were Danielle Hogan, Nathan Ambrose, Transition Year class of 19/20 Laurel Hill Coláiste FCJ, Charlie Sulliman, Finn Coleman, Cadet Unit from St John’s Ambulance Limerick, Caoimhe Lalor, Evan Condon, DAY Group from Limerick Youth Service and Sarah Corbett Lynch. 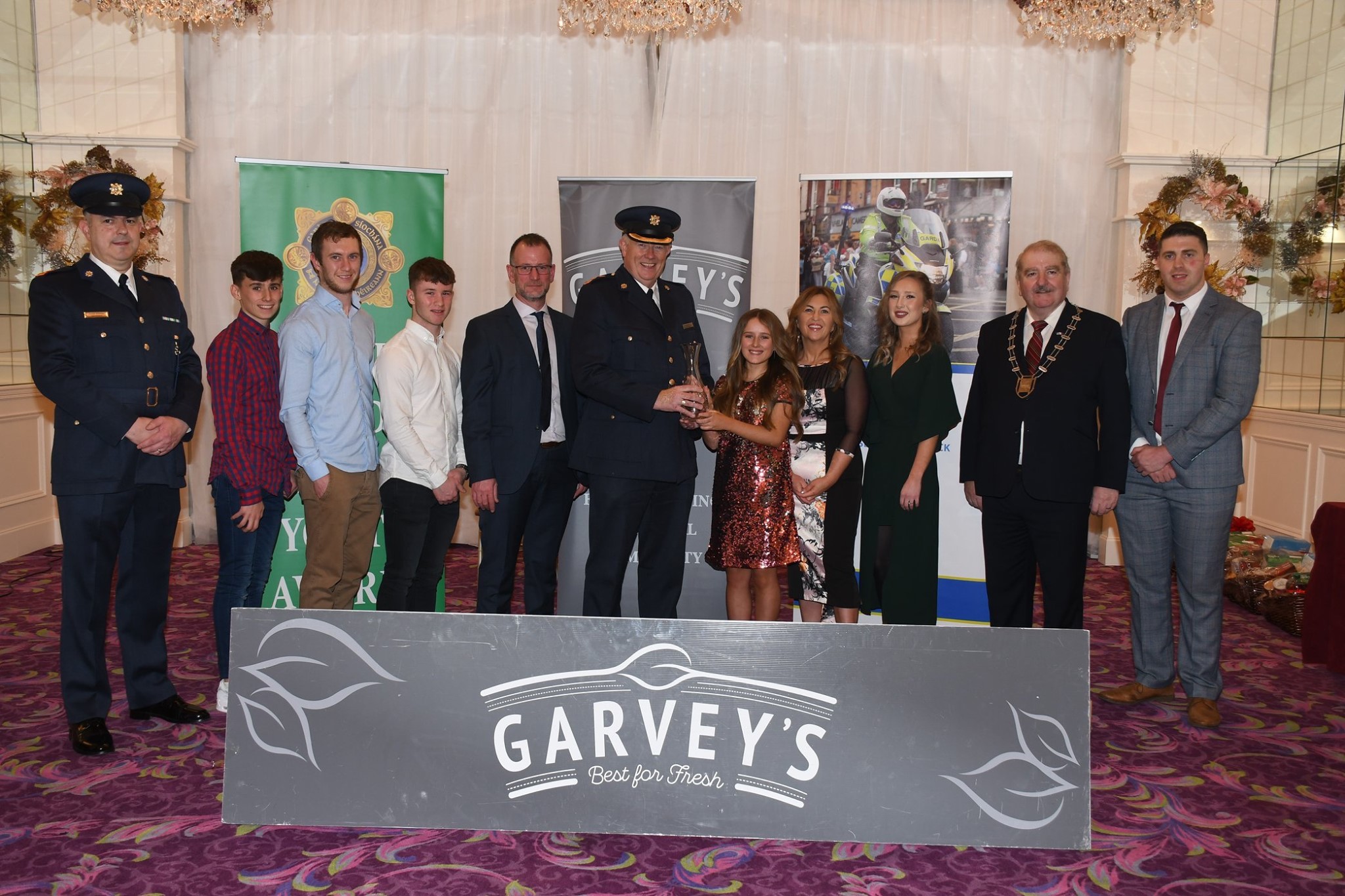 Sarah Corbett Lynch was one of many who received the award on the night and was joined by her family for the presentation of the award.

Among the attendance and speakers were Deputy Mayor Kevin Sheahan, Minister of State Patrick O Donovan TD, Chief Superintendent Gerard Roche, Mr. Jim Garvey, Garveys Supervalu and Centra who are the sponsors of the event.

The MC for the night was the well-known Seamus Hennessey. All the speakers congratulated the winners, their families, mentors, guardians, and teachers for all the wonderful work they had done to achieve their awards and wished them every success in the future.

Each of the award winners received trophies of cut crystal while every young person nominated for an award will receive a certificate in early 2020 in recognition of their nomination. The Limerick award winners will now be nominated for the 2nd Annual Garda National Youth Awards which will take place in April 2020.

Danielle from Moyross in Limerick is 17 years old and is a sixth-year student at Thomond Community College. Danielle has been a volunteer in her community for many years. She has worked in Dublin in the Mother Teresa Soup kitchens helping to make up dinners and serving then to the homeless. She visits a local nursing home to chat with patients and to help them with various tasks. She regularly assists her school with any function and is a member of the school anti-bullying committee which works to promote a culture of respect and tolerance amongst students.

Nathan Ambrose is from Prospect, Limerick City and is a student at Coláiste Mhichíl CBS, Sexton Street. He has taken it upon himself to assist other students that have been struggling with illness or physical disability. He will regularly assist them while in class and stay with them at breaks while other students engage in activities. When something needs to be done, Nathan will answer the call to such an extent that staff in the school are saddened that he is in his final year.

Eliza Zawadka, Laura Quinn, Lucy Webber, Dearbhla Smith, Abbie Pigott, Lily Mahon, Anna Odufuwa, Alex Carter, Ella Dillon, Chloe McInerney, and Isobel Fennel are all students at Laurel Hill Coláiste FCJ South Circular Road and are all in Transition Year. Every week they visit St Paul’s nursing home getting involved in the activities within the center. Some of the students are involved in an art program where 54 plaques reflecting the residents’ lives past and present will be designed and completed. The project will run from now until May 2020. The other students engage with the residents chatting, singing and playing music. On alternative weeks, all the girls take part in a large group activity such as running the bingo session.

Charlie from Castletroy, Limerick is 19 years old and is a first-year student at LimerickCollege for Further Education studying early childhood care and hopes to study at Mary Immaculate College in the future. When she was very young, she suffered a life-changing injury as a result of an accident. However, despite the loss of mobility in her arm, this did not deter her from taking a fully active part in life and in her community. She is a keen sportsperson and has numerous titles in Paralympic competition for javelin, shot put and discus. When she was in a transition year, she began volunteering with the Share a Dream Foundation and is now one of the longest-serving volunteers in their facility, Dreamland in Rhebogue.

Finn is a student at John the Baptist Community School, Hospital. He is 18 years old and lives in Caherline, Co Limerick. In the summer of 2018, he began a photography project where he met and photographed over twenty local professionals. Having completed all the portraits, he organized an exhibition of the photos and then went about putting together a book containing all his photographs and interviews. He linked up with Trocaire and through his initiative, he was able to raise funds to assist children in Africa to receive an education. Along with being able to raise funds for Trocaire, Finn’s book has created a valuable resource as it includes 23 insights in several different careers and provides important tips and pointers to anyone who may wish to pursue one of these paths in the future. Having noticed that there is a large percentage of African teenagers between the age of fifteen and seventeen that are not able to receive education, he used his creativity and enterprise to help provide a better future for those children that are less well off than others.

Caoimhe Duffy, Aislinn Barnes, and Aoife Benson Hannon are all members of the cadet unit of St John’s Ambulance Brigade in Limerick. Last August while on their way to other duties they came across a traffic accident involving injury on the Ballysimon Road. They immediately put their training to good use. They safely managed the scene, alerted the emergency services, treated the injured and directed traffic to prevent further accidents. They then handed the scene over to the national ambulance service and the Gardai. Describing their actions as heroic, the communications director for St Johns Ambulance stated that the girls ‘did a fantastic job, especially with securing the scene and taking control so that no one else came upon the accident and got hurt.

Caoimhe Lalor is a sixth-year student in Ard Scoil Mhuire, Corbally and is a native of Limerick City. Despite her physical challenges, Caoimhe is very civic-minded and recently initiated campaigns to rid Limerick City from the plague of dog fouling and she also campaigned to have better and proper access to historical buildings for wheelchair users. She was invited to attend the Small Business Innovation Challenge awards to represent her peers and other wheelchair users. She is presently completing her junior leader program with Limerick Youth Service and hopes to continue being part of L.Y.S. facilitating and organizing youth events by supporting senior leaders.

Evan Condon from Newcastle West is 18 years old and is a student at Desmond College, Newcastle West. Evan set himself the Fairtrade challenge and successfully met the criteria in four areas to register the school as a certified Fairtrade secondary school which recognizes the commitment to achieving a better deal for producers in the developing world, thus helping to improve their lives and plan for the future. He organized quizzes and poster competitions to promote the Fairtrade initiative. He then had Fairtrade officials talk to classes within the school to advise what staff and students could do to help. He has also mentored fellow students in the area of Fairtrade and has successfully lobbied the canteen and staffroom to stock Fairtrade products.

Chesney Imade, Mary Aron, Diana Aron, Jade Olatilwea, Jessica Mtshware, Tyrone Guillen Patience Ani, Chidema Ani, Theresa Mbekwa, Thomas Sila Gand and Siam Muhamjmed are all members of DAY Group. They are all young people from diverse backgrounds including South Africa, Burundi, Nigeria, Syria, and Bangladesh. The commonality of the group is their living experience in Ireland and they decided to tell their story through the medium of drama. They scripted, rehearsed and delivered a play in the Belltable in May 2019. In it, they explored themes such as bullying, racism isolation, marginalization and living in direct provision.

Sarah Corbett Lynch is a 1st-year student at Mungret Community College. In 2006. Sarah’s mam Mags passed away from a sudden asthma attack. When Sarah was four, she moved to America with her dad Jason and brother Jack 6 to begin a new life. In 2015, her dad Jason died suddenly. They moved back to Ireland to live with their Aunt Tracey, Uncle David and cousins Dean and Adam in September of 2015. Sarah faced the challenges of how to deal with grief, loss, transitioning back to Ireland, losing friends in North Caroline, making new friends in Limerick, beginning a new school and living in a new neighborhood. Soon after she moved home, she began volunteering. A talented actor and singer, she got involved with the Team Limerick Clean-Up, she organized shows with her friends to raise funds for Midwest Cancer Foundation and The Asthma Society, she campaigned to save a treasured local amenity and still had time to sing with the Unity Gospel Choir. Sarah is busy organizing the release of the first in a series of five stories aimed at helping to support children who are going through difficult times. In her first book “Noodle loses Dad” she explores the feelings of grief, loss, blended families and ultimately resilience and hopes through her characters. She has written these books to help other children like her, who are dealing with lots of different challenges in life at a young age. She wants her books to reach out and be a source of comfort that will help other children process their story and find hope and happiness again. Sarah is an inspirational, positive child, who despite having experiences that no adult should endure, is optimistic and enthusiastic about life and has brought joy to all those around her.