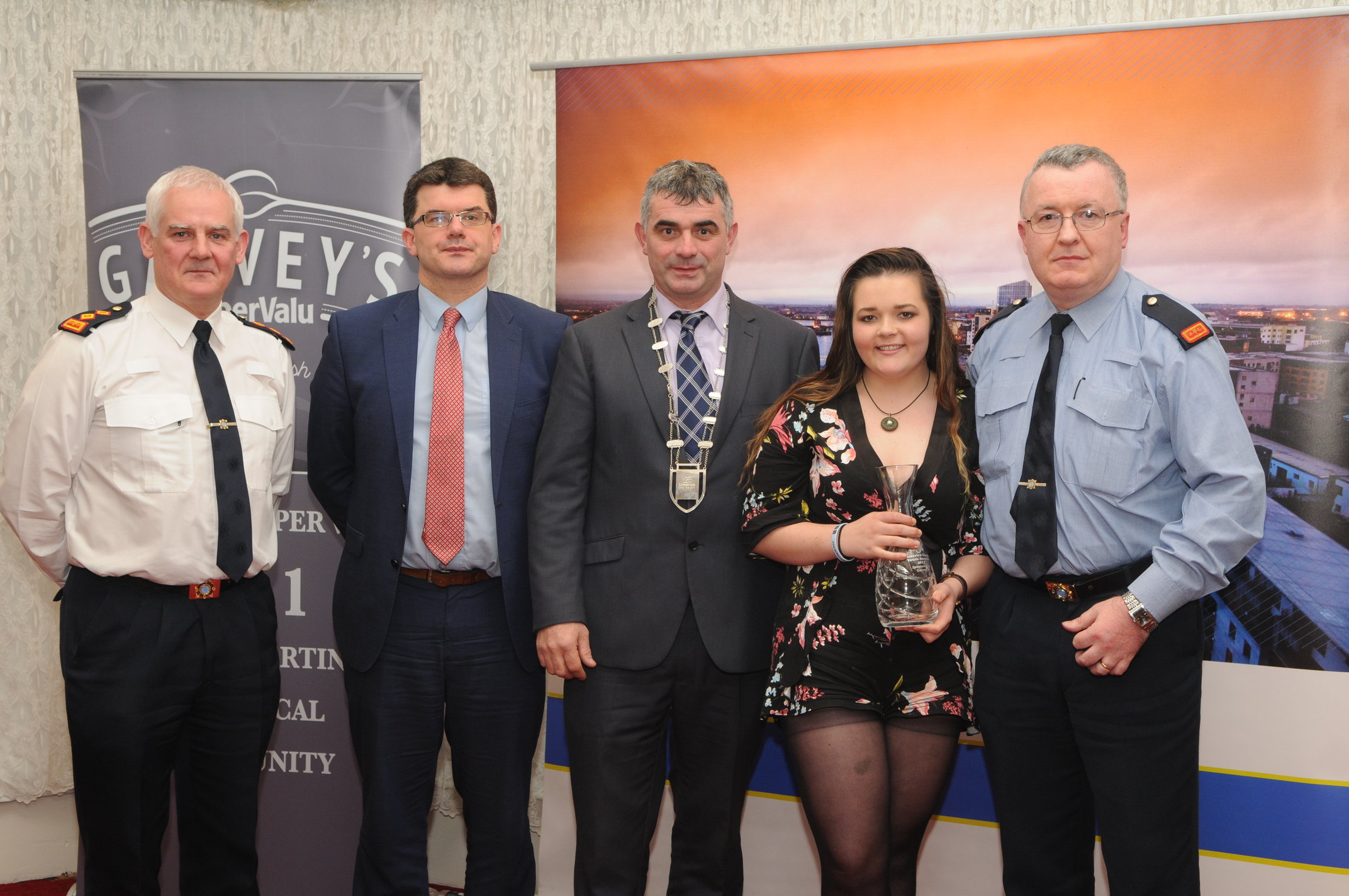 Among the attendance at the Limerick Garda Youth Awards 2017  were Deputy Mayor Richard O Donoghue and Mr. Jim Garvey of Garveys Group who are the main sponsors of the event.

Speaking at the Limerick Garda Youth Awards 2017 ceremony Chief Superintendent Sheahan said “Tonight was recognition of all the wonderful achievements of the young people receiving awards. They were a credit to their family, their community and themselves”.

Councillor Richard O Donoghue, Deputy Mayor of Limerick congratulated all the winners and wished them well for the future. It was great to see young people being recognised for all the work they do within the community and the challenges they have overcome.

Mr. Jim Garvey of Garveys Group also congratulated the winners of the Limerick Garda Youth Awards 2017 and said that they were now role models that other people looked up to.

The Limerick Garda Youth Awards 2017 saw six individuals and two groups receive awards this year. Among the winners were some inspirational young people and here are some of their stories.

Leah from Corbally in Limerick has worked tirelessly to raise awareness of meningitis since she lost her sixteen-month-old sister, Lola Jane to the disease in April 2015. Inspired by her families’ work in raising awareness on meningitis, Leah decided to organise a ball in memory of Lola and so Lola’s Ball was born in 2016. Thanks to the amazing work by Leah and her family and the support from the people of Limerick and beyond, over €16,000 was raised for ACT for Meningitis, a charity which aims to raise awareness and educate society about the signs and symptoms of Meningitis. This year’s event will also see all funds raised at the ball go directly to the charity.  A talented singer-songwriter, Leah has won a number of talent competitions and has sung at various events in the city. She has been a mentor for younger students in Ard Scoil Mhuire and is always enthusiastic to volunteer within her school and local community. Her community spirit and dedication to a cause have enabled her to be a very positive role model for everyone that she meets.

Diana from Raheen in Limerick is a student in Coláiste Chiráin in Croom.  She has been playing chess from an early age having been coached by her father. Since the age of thirteen, she has competed at international level. The lack of funding for chess in Ireland means that for Diana to compete at these tournaments she has had to raise the funds on her own to get to these locations. Through events like table quizzes and exhibitions, she has managed to attend, compete and succeed against competitors from countries who provide vast resources for their chess players. This year she claimed the World Schools Under 17 Chess Championship. She is very involved in coaching young people in chess and is also actively involved in all aspects of school life. Her commitment and dedication make her a great role model for others.

Three young boys, Gearoid Malone, Jackson Morey and Joe Cannole have been active participants in this youth project since 2014. It is a mainstream community project that engages young people in programmes and activities that best suit their needs. The programmes are delivered through a variety of different mediums where young people can gain new skills and have fun. As part of the programme, Gearoid, Jackson, and Joe made an anti-smoking awareness film which was entered into the national X-HALE competition, an anti-smoking initiative from the Irish Cancer Society. The film won a national award for most online views. The boys challenged themselves to try and get as many young people to endeavor to stay away from smoking and in the process have improved their own abilities in communication and participation within the wider community.

Patrick lives in Mungret and has been involved in numerous initiatives in his local community for many years. A member of Mungret GAA, he is involved in coaching underage teams, raising funds and helping to organise their local music festival. He is also actively involved in the local scout troop and helps with Special Olympics. Milford Hospice Harvest Fair is another place you will see Patrick helping out. This year during the summer he volunteered at the Nenagh Special Summer Camp which helps children with disabilities from Limerick, Nenagh and the surrounding areas. The experience helped him to appreciate how well these children can deal with the hurdles placed in front of them and has planted the seed that he wants to help out more. Patrick leads by example and by his actions highlights to others what it means to be active in your community.

Hayleigh is from Moyross in Limerick. She has achieved highly in the martial arts world and among her other titles, she is currently IKF Junior National Kickboxing Champion. She was one of the first black belts in the Learning Hub Kickboxing Club. Her coach, Paul O Brien says that Hayleigh trains really hard in the gym to fine-tune her skill set and if she was not training herself she would be helping to coach over 100 youngsters every week.  Her success did not happen overnight and it grew from hours of hard work, self-discipline, determination and a positive attitude. She is very much involved in the community and can spend three or four nights a week helping all the younger members of this very active club. With her commitment and dedication, she is a very positive role model to the young people in the club and in her local community.

Aaron Hanlon, Cian Walsh, Eoin Tucker, Jack Hayes,  John Walsh and Liam McSweeney are six young men from Foynes that have been volunteering among their local community for many years. Over that time, no matter what was required they answered the call. They have been involved with the Going for Gold project, Tidy Towns, Team Limerick Clean Up,  the Christmas Market,  the Foynes festivals and community runs as well as the local sports and social clubs. They have developed their own projects over the years and are always willing to give their time for the betterment of their community. All are accomplished sportsmen who have never left their community down. They have a great sense of community spirit, have a willingness to help others and are always full of good humour and enthusiasm.

Keelan is from Ballinacurra, Limerick and is a student at St Clements College. He is very passionate about swimming and lifesaving. He has volunteered for the past three years in Bawnmore helping children with special needs on a one to one basis. Having a brother with special needs has given him the opportunity to help with the Down Syndrome Association here in Limerick. He has traveled to Lourdes and is active in his local parish helping with events such as the Senior Citizens Christmas party.  He continues his voluntary work in his school, coming to the aid of many different charities and recently received the ‘Ethos Medal’ for his volunteer work. He has been involved with the scouts for the past twelve years where he is a team leader and national youth representative.  Kealan’s busy schedule of activities has shown his commitment to helping others and his dedication to his school and community.

Megan from Dooradoyle in Limerick City was diagnosed with scoliosis over three years ago. In early 2017 she appeared on an RTE programme called Living On The List which highlighted the suffering that people such as Megan go through while waiting for spine correction operations. She eventually had her surgery in August and her improvement has been so good that she was able to train for and take part in the Limerick Ladies Mini Marathon. While doing so she and her mum, Sharon raised a considerable sum of money for the charity, Straight Ahead, founded by her surgeon, Dr. Pat Kiely and Ronald McDonald House, which provides accommodation, care and support for families of ill children being treated in Crumlin Hospital. Megan is now back at school and has had her surgery. She hopes to raise awareness about this life inhibiting condition. Megan’s courage, determination and positive outlook during all this time have provided hope to those waiting for procedures that will improve their quality of life forever.

For more on the Garda Youth Awards click here 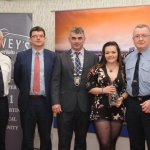 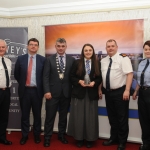 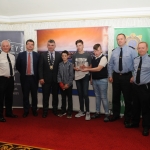 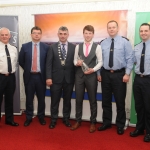 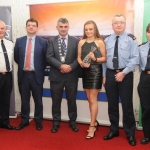 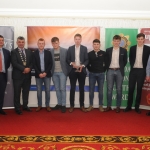 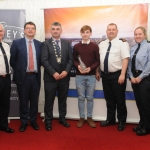 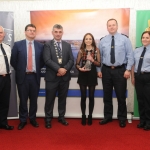 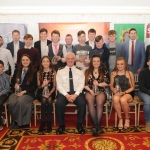