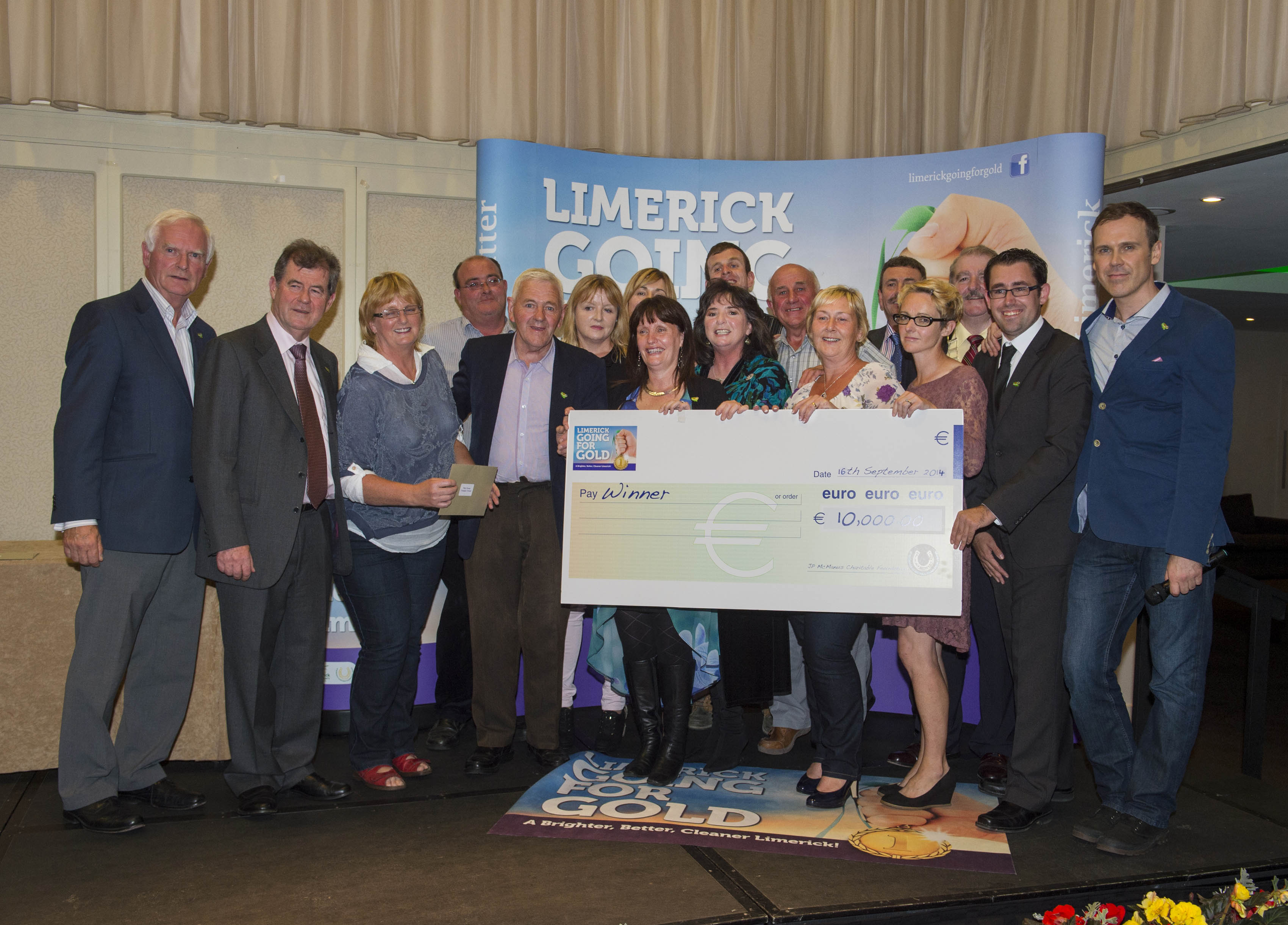 Cahedavin residents association are awarded the top prize of €10,000 in the Going For Gold Finals. They were presented with their award by JP McManus and Gerry Boland of the JP McManus Charitable Foundation, along with Cathaoirleach of Limerick City & County Council, Cllr. Kevin Sheahan and Richard Lynch of I Love Limerick. Picture credit: Diarmuid Greene/Fusionshooters

There were jubilant celebrations in The Strand Hotel this evening (Tuesday) as the residents of Caherdavin were announced as the Limerick Going for Gold 2014 winners.

A total of seven communities made the final of the Limerick Going for Gold Tidy Town Category which had a prize pool of over €50K, courtesy of the JP McManus Charitable Foundation. Prizes were also awarded in four other Going For Gold categories.

Among those attending the award ceremony which was hosted by Richard Lynch of ILoveLimerick.com and on hand to congratulate finalists for their efforts during 2014 were AP McCoy, JP McManus, Celia Holman Lee, Jerry Flannery and members of the Limerick Senior Hurling, Munster Rugby and Irish International Women’s Rugby teams.

Cathaoirleach of Limerick City and County Council, Cllr. Kevin Sheahan congratulated the participating communities for helping to ensure that Limerick Going for Gold 2014 was “a tremendous success”.

He also thanked Limerick City and County Council and the JP McManus Charitable Foundation for organising the initiative, as well as the event supporters and sponsors including Live 95FM, The Limerick Leader and The Limerick Chronicle, The Limerick Post, Parkway Shopping Centre, I Love Limerick and Southern Marketing Media & Design.

“Limerick Going for Gold’s mission was to make Limerick a brighter, better, cleaner place to live, work and visit and every community who participated in this campaign, as well as the event sponsors and supporters continues to contribute to that mission,” stated Councillor Sheahan.

Unity Gospel Choir Limerick were delighted to be a part of it with our new version of Denis Allens Limerick Your a Lady!!

Prizes were also awarded to TidyTowns groups who demonstrated the greatest progress in each of the 2014 TidyTowns Competition categories. Five awards of €1,000 were presented to groups in the following categories: Overall Most Improved Score (Annacotty); Tidiness and Litter Control (O’Malley Keyes); Sustainable Waste and Resource Management (Caherdavin and Moyross); and Landscaping and Open Spaces (Woodlawn Park). Meanwhile, Annacotty and Ballincurra Weston Residents Alliance each received €500 as respective winners of the Community Involvement & Planning and Wildlife, Habitats & Natural Amenities categories.

The Community Challenge Category, for groups not participating in the TidyTowns Competition, was won by Kilteragh who received a €5,000 first prize. Second-placed Glenbrook/Glendale/Glenlawn received €3,000 while South Limerick City was awarded €1,500 for finishing third.  Three runner-up prizes of €500 were awarded to Glencairn, Castletroyview and Drominbeg.

The Garden Competition Category was sponsored by the Parkway Shopping Centre and featured a prize fund of €1,000 in shopping vouchers. There were 31 entries for this competition. Roger Beck from the Parkway Shopping Centre presented prizes to Claire Waters, Barrington Street (1st), Gerry & Teresa Ryan, Greenfields (2nd) and Eamon & Terry Ryan, Monaleen Heights (3rd).

As in 2013, the Individual Merit Award Category once again awarded individuals who made a valuable contribution to the appearance of their local community.

Speaking this evening, Mr. Boland said it was considered important that recognition be given to individuals for their contribution to the environment. He continued: “These individuals may or may not be on an organising committee but their dedication to their communities and local areas is obvious.  These are people who not only have asked what can I do for my city but they have answered this question with their actions.  They are role models for all of us, leading by example – ‘a do as I do’ attitude to life.”

A new addition to this year’s Going For Gold is the Endeavour Award Category. The inaugural recipients of the award were Limerick Riverpath Volunteers, Limerick Youth Service Centre and Limerick Civic Trust.

Meanwhile, one of the big surprise moments of the night was when Munster Rugby’s Paul O Connell took to the stage to announce Team Limerick Clean-up (TLC), the JP McManusCharitable Foundation’s latest collaboration with Limerick City and County Council to combat litter.

Sponsored by the JP McManus Benevolent Fund, the TLC initiative will be co-ordinated by the Council and it is hoped that as many people as possible throughout Limerick will come together on Good Friday (April 3rd, 2015) to collect and recycle litter.

Commenting at the launch, Paul O’Connell said: “This has to be one of the most exciting community-based campaigns to ever hit Limerick, and we hope people will come out in force to do their bit to clean up the environment. It only requires a few hours of time on GoodFriday and getting involved promises to be great fun as well as very worthwhile. Volunteers can sign up easily on www.teamlimerickcleanup.ie or simply call the helpline on 061 496200 so remember the date and help make a difference.”