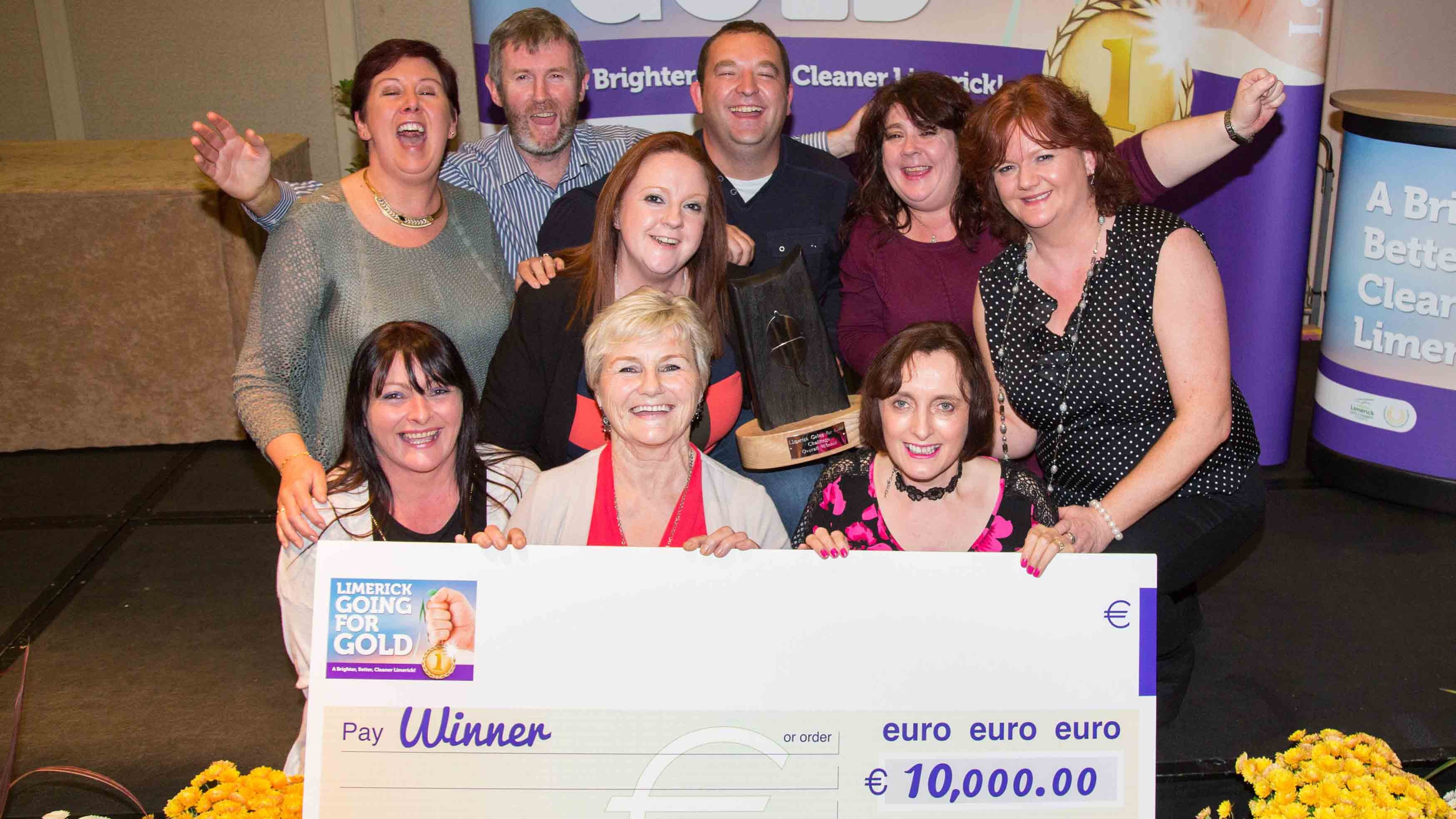 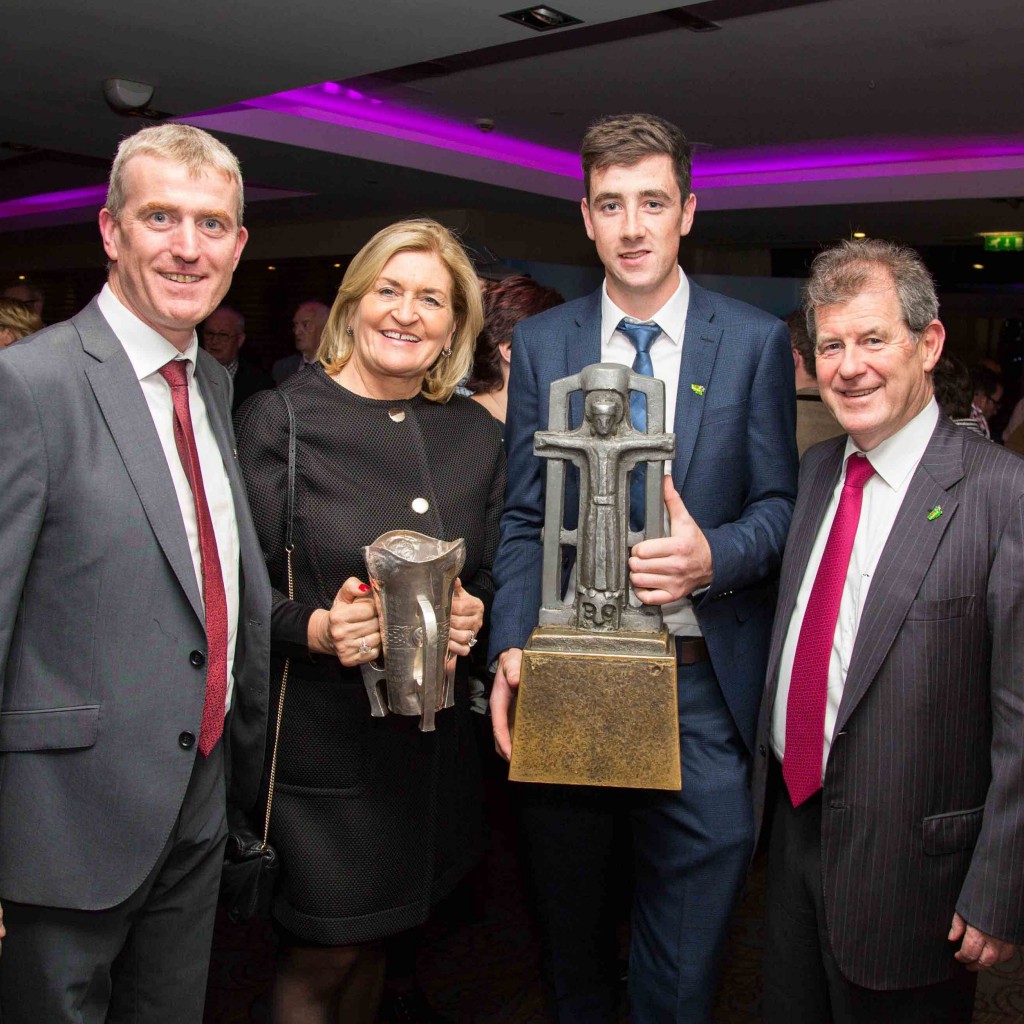 JP McManus presented Castleconnell with their cheque and trophy, thanking them for their role in their community.

“There’s a great passion here, of people and a love for the county. Everybody embraces everybody.

“I feel very privileged and honoured to be here and everybody’s a winner here. I can see Limerick getting cleaner and brighter, I am very happy to be from here,” McManus said.

Communities were thanked for their efforts at the annual Grand Final at the Limerick Strand Hotel, with our own Richard Lynch taking on the role of Master of Ceremonies for the event.

Over €76,000 was awarded to Limerick communities who raised awareness of environmental issues, got people involved in their own areas and made a physical difference in communities.

Through four categories – Challenge, Limerick in Bloom, Best Front Garden and Tidy Towns Incentive categories – Limerick communities were awarded with monetary prizes and were commended on their “fantastic” work.

Awards were also presented on the night in Endeavour and Residential Areas categories.

Limerick Mayor Liam Galvin was in attendance on the night, acknowledging the role of communities and sponsors in the Going for Gold initiative.

“Limerick Going for Gold’s mission is to make Limerick a brighter, better, cleaner place to live, work and visit and every community who participated in this campaign, as well as the event sponsors and supporters continue to contribute to that mission,” said Mayor Galvin.

The Challenge Category winners, whose finalists were chosen by public vote following radio and newspaper coverage, included Kilteely, Broadford, Anglesboro, Rathkeale, Hospital and O’Malley Keyes, each receiving an award of €1,000.

Croom and Caherdavin came in joint fifth place in the Challenge category, each receiving an award of €2,000.

Kilfinane, reaching fourth place, were presented with a cheque for €3,000 by Gerry Boland.

South Limerick City received an award of €5,000, coming in third place in the Challenge category.

RTE Correspondent Joe Little attended the event, emphasising the effect working together can have in a community, encouraging an even further sense of inclusion.

“When Limerick people are embattled.. The communities show themselves to their best effect.”

With the Limerick in Bloom category, Adare, the overall winner, were awarded with the

Adare were announced as the overall winner of the Limerick Going for Gold Limerick in Bloom, receiving €5,000 and the perpetual trophy.

Ardpatrick, were the overall runner-up receiving €3,000, with Craogh, Galbally, Glin and Clarina receiving €1,000 for reaching first place in their electoral areas, in this category.

Also receiving awards of €500 in the Limerick in Bloom category, for runners-up in their municipal disitrict, were Foynes, Kilmallock, Strand and Gouldavoher.

First and second runners-up of the Best Front Garden category were Teresa and Gerry Ryan, Rosbrien, and Dolie Whelan, Ballyneety.

With the Tidy Towns Incentive Category, Abbyfeale was awarded for their most improved score in all of Limerick, receiving an award €4,000 to help them with their work.

Other groups were awarded €1,000 for receiving the highest score in the National Tidy Towns Results book in 2015. Awarded in this category were Glenosheen, for Tidiness and Litter Control, Kilmallock for Sustainable Waste Management & Resource Efficiency, Mountcollins for Wildlife and Adare & Ardpatrick for Landscaping and Open Spaces.

Caherdavin, Croom, Athea and Bruff each received €2,000 after being named as the most improved in their municipal area.

St Augustine School, Youth Encounter Project, Limerick Service Youth Centre and Mill Road in Corbally were awarded with the Endeavour Award, being recognised for their Environmental Endeavours on behalf of Limerick.

Moyross received a special mention after previously winning €1,000 in a Tidy Towns Special Projects for the “most innovative waste prevention project”, sponsored by the Clean Technology Centre.

Read more about the Going for Gold competition here