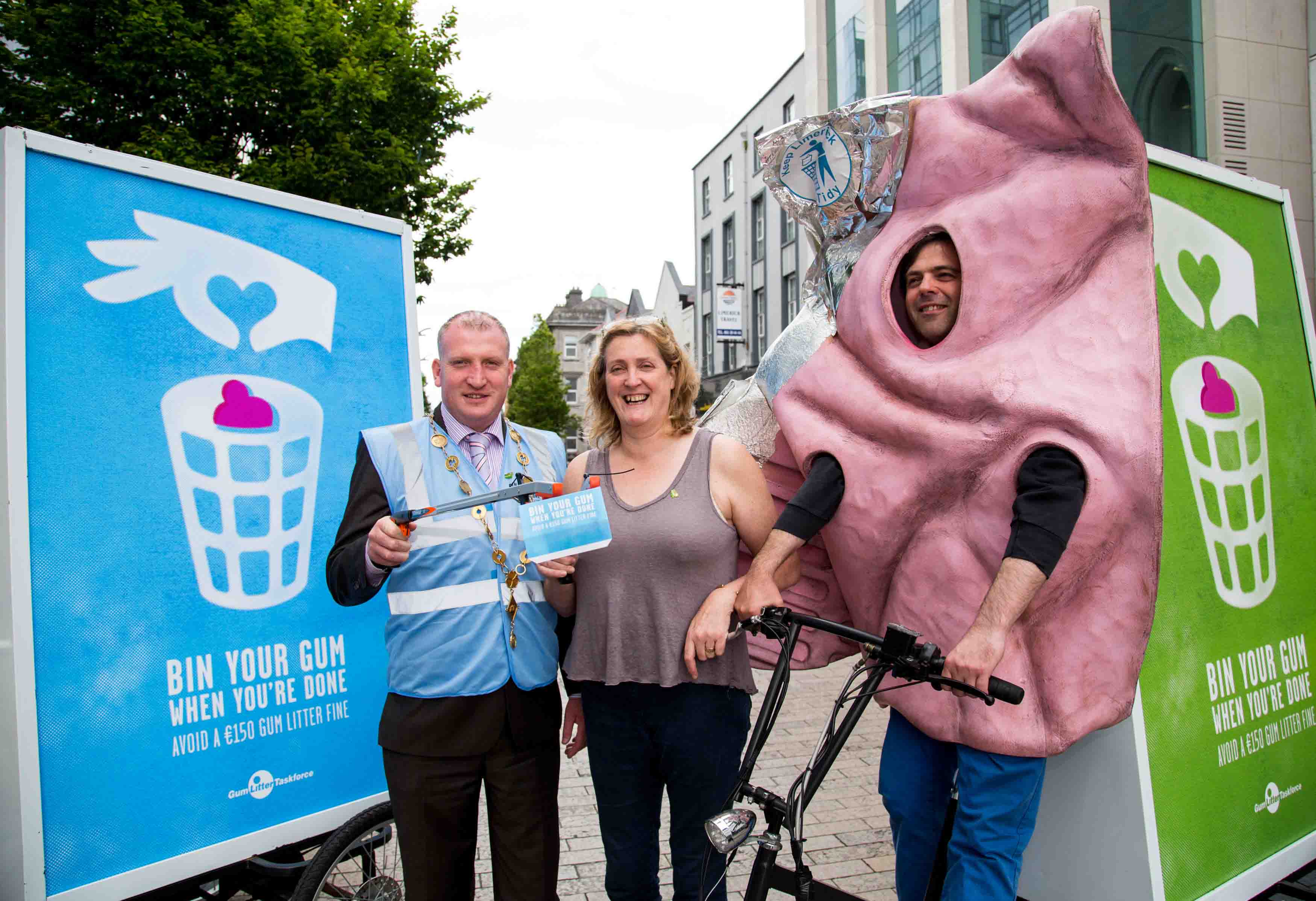 The Limerick Gum Litter Taskforce launch follows an agreement between the Department of Environment, Community and Local Government and Food and Drink Industry Ireland (FDII) representing the gum industry, to fund a national gum litter awareness programme from  2015 – 2017.

The agreement includes new agreed mechanisms to further enhance and reinvigorate the campaign and represents a multi-million euro commitment by industry to tackling the issue of littered gum. The initiative aims to build on the success of past public education programmes to date and introduce new elements to help raise awareness of the impact of littered gum and encourage proper gum disposal.

Speaking at the launch Mayor Galvin said: “It is wonderful to see everyone in the community coming together to get behind this campaign, both here in Limerick and in so many towns around the country. The GLT campaign brings together the community and local authorities with a common goal to fight gum litter.”

Speaking at the official launch of the new programme and the campaign for 2015, Minister for the Environment, Community and Local Government, Mr. Alan Kelly welcomed the renewal of the agreement: “The agreement to renew this initiative represents a genuine commitment by industry to finding a solution to improper gum disposal. The programme will continue to focus on achieving a lasting change in gum disposal behaviour, by encouraging people to dispose of gum litter responsibly.  Several important new elements have been agreed in order to reinvigorate and enhance previous campaigns. This is an excellent example of Government working positively and constructively with industry to improve our environment, to the benefit of all our communities.”

He continued: “I am confident that the new measures introduced will significantly improve the awareness and behaviour and have a further positive long-term impact on litter. I am particularly pleased that over the course of the agreement, the chewing gum industry has given a commitment to expand its schools education programme targeting 14-16 year olds. I anticipate that this measure will have a further significant and positive effect in reducing gum litter.”

This will be the GLT’s third full campaign and it will build on the enormous success achieved to date which has seen it contribute to a drop in gum as a proportion of litter from 26.37% in 2007 to 15.32% in 2013, as measured by the National Litter Pollution Monitoring System. The 2014 GLT campaign results showed a 93% acceptance that irresponsibly disposed of gum is littering and the lowest baseline amount of littered gum since the GLT began measuring in 2007.

Paul Kelly, Chairman of the GLT, added: “We look forward to launching the new three year programme and a number of new initiatives including; ‘Bin It! Buddies and our new strapline ‘Bin your gum when you’re done’. The programme officially launches today as an extensive advertising campaign is rolled out nationwide. The hugely popular Bin It! workshop will tour the country in the autumn.”

Industry representative Alex West; Senior Manager, Corporate Affairs – UK & Ireland for the Wrigley Company said; “The Wrigley Company is delighted to be the industry representative on the GLT. The Gum Litter Taskforce is a unique industry funded initiative that runs in partnership with local and national government and civic society to tackle a common goal through awareness and education. The campaign to date has demonstrated unequivocally that this is the sustainable way to address our aim of eradicating littered gum.”

Visit the official website for the Gum Litter Taskforce here

Read more about ‘binning it’ here

The Waterboys Live at the Big Top 2015