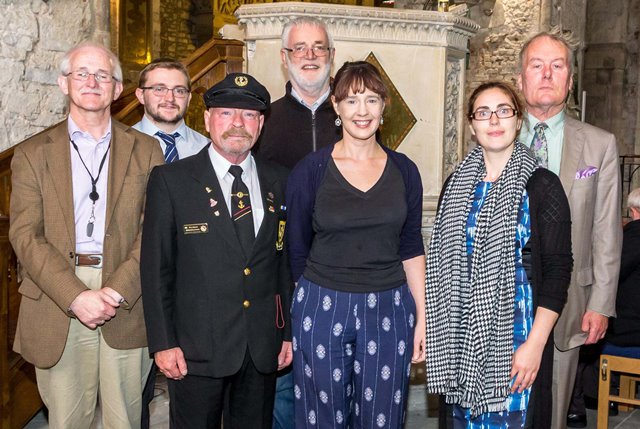 Limerick Heritage Week 2015 this week remembered the role played by 4,000 Limerick men during World War One in an event held at St Mary’s Cathedral in Limerick.

Journalist and author Kevin Myers, who has spent over 30 years researching this almost hidden history of Ireland’s involvement in World War 1, delivered the talk in front of 320 people, among them serving and retired members of the Irish Defence Forces.

The public lecture coincided with the 100th anniversary of the Gallipoli campaign which claimed the lives of 800 members of the Royal Munster Fusiliers, 75 of whom were from Limerick.

Among the Limerick men killed during the ill-fate campaign were 8 natives of the village of Coonagh who died when their ship was torpedoed. Conservative estimates suggest that one in four, or 1,000 of Limerick’s 4,000 listed men died in the First World War.

The lecture was hosted by Limerick Museum and Archives which is also hosting Stand Up and Fight – an exhibition of photographs, firsthand accounts and artefacts relating to Limerick’s military history – in City Hall, Merchants Quay, until early December.

Items on display include flowers sent home by a Limerick soldier from the front at Ypres to his mother in Limerick, an oar from one of RMS Lusitania’s lifeboats, cannonballs and musket balls from the Siege of Limerick, pikes used in the era of the United Irishmen, a bloodied apron worn by a Limerick nurse while serving in a First World War field hospital, German and Allied military militaria, and rare photographs of the American Civil War, Boer War and First World War.

Limerick City and County Council is working with local communities and the Heritage Council to promote and raise awareness of Limerick’s diverse and unique heritage for National Heritage Week 2015.

National Heritage Week 2015 is currently underway from August 22 – 30 and is part of European Heritage Days which is celebrated in 40 countries. Ireland is one of 23 countries that have chosen the theme of raising the awareness of the value of industrial and design heritage.