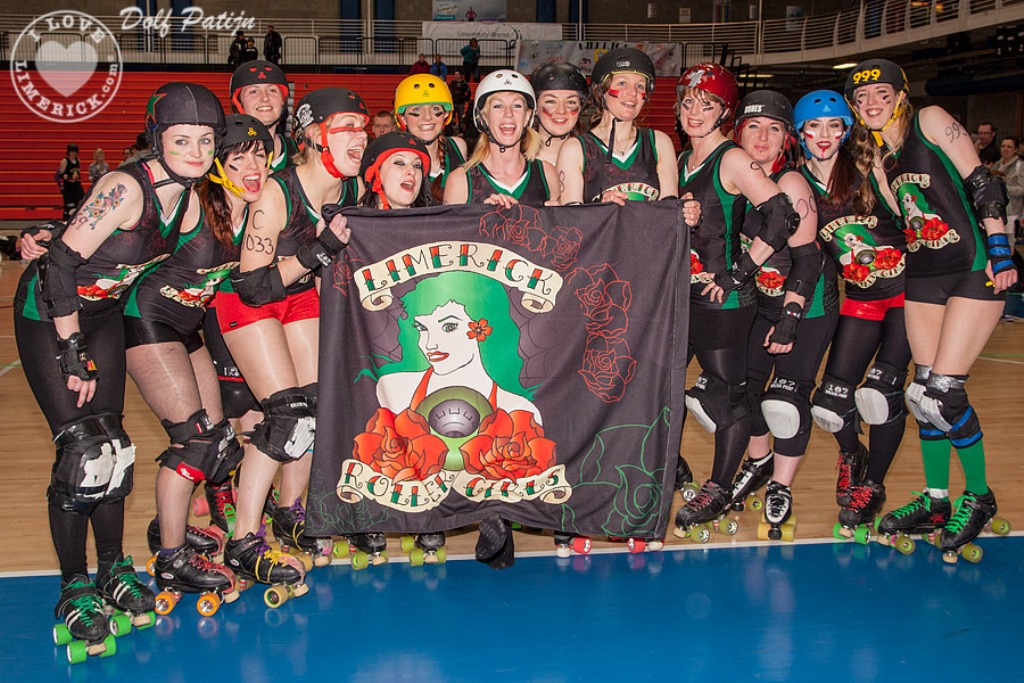 Roller Derby is a contact sport played on roller skates by two teams of five members roller-skating in the same direction around a track. Game play consists of a series of short matchups, or “jams” in which both teams designate a scoring player, the “jammer” who scores points by lapping members of the opposing team. The teams attempt to hinder the opposing jammer while assisting their own jammer – in effect, playing both offence and defence simultaneously.

The two day exhilarating bootcamp took place at two of the finest indoor venues in Limerick; University of Limerick and Delta Sports Dome. Advanced Roller Derby skaters flocked from all over Ireland and the UK for this event which was the first of its kind in Limerick.

The two American super derby coaches filled the weekend with drills and strategy all the while creating an exhilarating, exciting, fresh atmosphere, with derby players being able to soak up the skills and knowledge these coaches brought.

Coach Spanx, a.k.a. Shane Darby was formerly the head coach of a women’s team in Missouri U.S.A. Following that, he made the decision to travel and coach leagues on an international level. He is a skater for the formidable St. Louis Gatekeepers and founder/coach of the U.S. National Co-Ed All Stars, Team Xtreme.

Quadzilla a.k.a Mo Sanders has competed at international level in roller derby and aggressive inline skating, and national level in jam skating. Formerly the principal coach for Rat City Roller girls, he currently skates for the hard hitting Puget Sound Outcast as well as being a member of Team USA Mens Roller Derby Team. He has performed at the Hollywood opening of the Roll Bounce film, and this led to involvement with Enchanted, in which he appeared in and choreographed most of the skating.

Limerick Roller Derby is from those aged 18+. There is no upper age limit. Club members currently range in age from 20 to 45. Limerick Roller Derby is a co-ed club made up of the Limerick Roller Girls and Pig Town Boys. They train at Delta Sports Dome four nights a week offering coaching to skaters from rookie to advanced. Advanced training is on Sundays from 1-3pm, and members of the public are encouraged to come and check out what it is all about. Alternatively, you can check out the Facebook pages of the Limerick Roller Girls here, and Pig Town Boys here for more information. Home games are hosted at University of Limerick arena (next games is June 13) and they frequently travel abroad for games. Since 2012, the club has grown in excess of 78 members. These members are made up of skaters, referees, non-skating officials and supporters of Limerick Roller Derby.

The Limerick Roller Girls are sponsored by Dolans Pub and their clubs 4th birthday celebration takes place in the warehouse on the April 17. See their website here for information on upcoming events and how to get involved. You can also follow them on Twitter here.