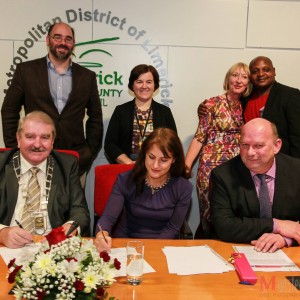 Limerick has been officially declared as an Intercultural City. Picture: Pat Browne/Munster Images

Delegates from across Europe arrived in Limerick on November  21- 22 for the ‘Sports Arts and Culture’ Intercultural Cities Conference and Workshop in the Limerick Strand Hotel which was addressed by speakers including former international rugby star Keith Wood, All Star Hurler Seán Óg Ó hAilpín and Grand Slam winning rugby player Niamh Briggs.

A charter was signed by Cathaoirleach Cllr Kevin Sheahan officially declaring Limerick as an intercultural city – only the second Irish city to do so.

“Limerick is the only Irish city besides Dublin to participate in the European Intercultural Cities initiative, giving it the opportunity to exchange and learn with other European cities such as Barcelona, Copenhagen, Rotterdam, London, San Sebastian, Montreal and Limassol,” said Cllr Sheahan.

“We have a long and proud tradition of literature, music and the arts –  in recent years, we have welcomed many new residents and communities, bringing a rich new source of music, culture and tradition.  I’m delighted that Limerick is signing this charter in our National City of Culture Year. Arts and culture play a key role in promoting diversity, connecting communities and breaking down communication and cultural barriers. Equally Limerick has always had a very inclusive attitude to sport and intercultural sports events have been to the forefront of integration initiatives in this region in recent years.”

Forty international delegates arrived for the two day Intercultural Cities conference which provided a mix of panel discussions, presentations and group dialogue co-ordinated by the Community Department of Limerick City and County Council.

We are delighted that the Council of Europe has recognised Limerick’s proud tradition and excellence in sports, arts and culture in choosing Limerick as a location for this important event,” said Josephine Cotter Coughlan, Director of Services, Community, Leisure and Emergency Services, Limerick City and County Council.

“This 2014 Intercultural Cities Conference provides an exciting opportunity to learn first-hand from the experience and best practice of cities across the world who have benefited from adopting an intercultural approach to sports, arts and culture and created diversity advantage. Going forward Limerick remains committed to becoming an Intercultural city and region, in which all residents are equally valued irrespective of their colour, creed or culture.”

Karen McHugh, CEO of Doras Luimni, which supports and promotes the rights of migrants living in the Mid-West said that Limerick has become a more diverse society over the last ten years.

“One in ten of the population are migrants who have come to work, live or study in the region,” she said. “Harnessing this diversity is a challenge and an opportunity for all residents of Limerick. The process of Limerick becoming an Intercultural City and region will take time and will require the active support of both local and migrant communities on the ground. This conference is an important milestone affording the opportunity to dialogue with and learn from other European and global cities and regions.”

You can find out about Limerick City of Culture here!

Vote for the Limerick Tidy Towns Award Winner of the Year