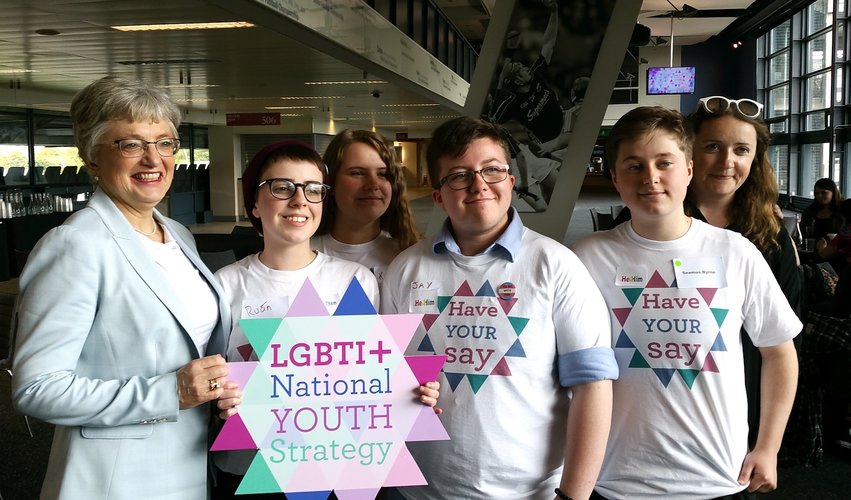 The Limerick LGBT Pride 2017 Grand Marshals have been announced with the honour being bestowed to inspirational young people who form the Youth Advisory Panel on the LGBT Youth Strategy. This strategy is the first of its kind in the world focusing on the needs of LGBT young people in Ireland

The aim of the group is to develop a strategy which addresses the challenges and needs faced by young members of Ireland’s LGBT community and will work with young people from all over the country to do so. The strategy will ensure that all young LGBT young people can achieve their full potential in terms of their physical and mental wellbeing, being safe and protected from harm and are respected and contributing to their world.

Nationwide consultations will take place this month to allow young people to weigh in on a new LGBTI+ National Youth Strategy which was launched by Minister Katherine Zappone. Young LGBT people will be involved in devising the strategy and will have a major influence along with contributions from a Youth Advisory Group and an oversight committee. The strategy will be developed in accordance with the National Policy Framework for Children and Young People 2014-2020.

Richard Lynch, PRO Limerick LGBTI+ Pride 2017 said “People have been asking now that Marriage Equality has been passed in Ireland, why is there a need for a Pride Festival? There will always be a need as long as others in the global LGBTQ community are not as fortunate as us in terms of equal rights. We must fight for our brothers and sisters throughout the world and take a stand for human rights for all. That’s why our theme this year is Lesbian, Gay, Bisexual and Transgendered (LGBTQ) Youth.. It will be an event supporting LGBTQ young people in Limerick and beyond and we want Pride to be an inclusive, open and integrated event welcoming all people regardless of their sexual or gender orientation, religion or race.”

The Limerick Pride LGBTQ Festival 2017 will be starting on Monday, July 10 until Sunday, July 16 with the Parade on Saturday, July 15 and will feature a multitude of events from workshops, support meetings and discussions to evenings of music and club nights, to cater to the Pride needs of everyone.

Lou McCormack, Chairperson Limerick LGBTQ Pride 2017 said: “We are thrilled to be able to offer a fantastic line up for Limerick LGBTQ Pride Festival 2017. We want to welcome everyone to join us in celebrating LGBTQ culture in Limerick and show Limerick for the truly open and accepting city that she is. It is set to build on the success and positive energy of previous years festivals, promoting community spirit, community engagement and celebration.”

The annual Limerick LGBTQ Pride 2017 Parade on Saturday, July 15, will bring some extra colour and music to Limerick City Centre, gathering at City Hall at 1.30pm the Parade will make its way at 2.30pm sharp up O’Connell Street, across Mallow Street to Henry Street, past Arthurs Quay Park and returning to City Hall.