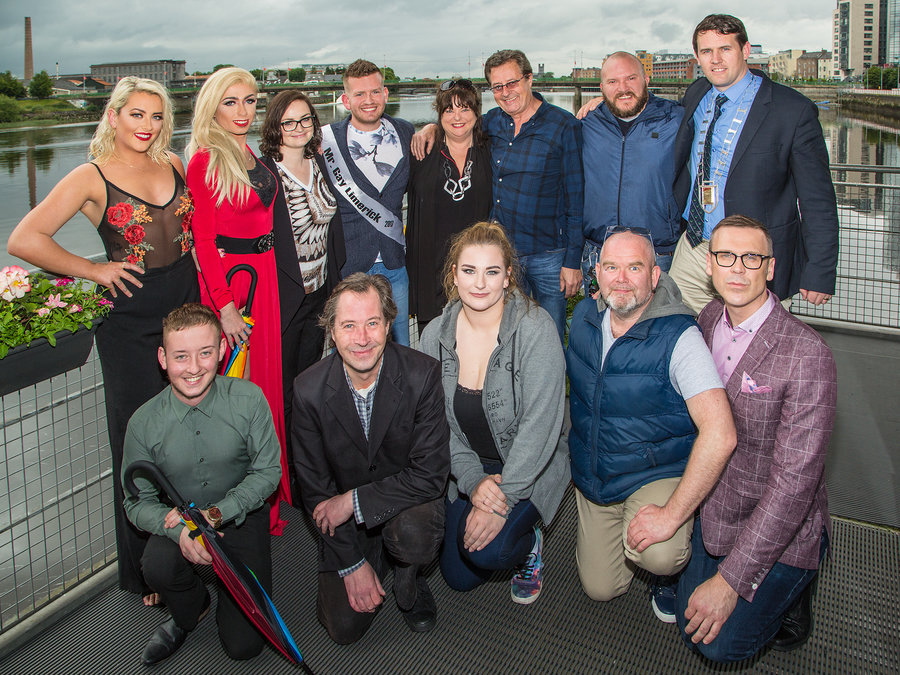 Friends of Pride, pictured at the launch of Limerick LGBTQ Pride Festival 2017 at the Clayton Hotel. Limerick Pride 2017 runs from July 10 – 16 with the Parade on July 15. Photo: Dolf Patijn/ilovelimerick.

The countdown to Limerick LGBTQ Pride Festival 2017 officially began with the press launch at the Clayton Hotel in Limerick City on Monday, June 12.

At the press launch Lou McCormack, Pride Committe said: “We are thrilled to be able to offer a fantastic line up for Limerick LGBTQ Pride Festival 2017, running from Monday, July 10 until Sunday, July 16 with the Parade on Saturday, July 15. There is something for everyone culminating in the annual Pride Parade and the PrideFest party directly after the Parade at the Hunt Museum.  We want to welcome everyone to join us in celebrating LGBTQ culture in Limerick and show Limerick for the truly open and accepting city that she is. It is set to build on the success and positive energy of previous years festivals, promoting community spirit, community engagement and celebration.”

Richard Lynch, PRO Limerick LGBTQ Pride Festival 2017 added, “People have been asking now that Marriage Equality has been passed in Ireland, why is there a need for a Pride Festival? There will always be a need as long as others in the global LGBTQ community are not as fortunate as us in terms of equal rights. We must fight for our brothers and sisters throughout the world and take a stand for human rights for all. That’s why our theme this year is Lesbian, Gay, Bisexual and Transgendered (LGBTQ) Youth. Ireland voted YES to same-sex marriage in 2015, a new generation has spoken who were responsible for that historic victory. This generation is our future leaders and we want to give them a platform as the voice of a new Ireland. It will be an event supporting LGBTQ young people in Limerick and beyond and we want Pride to be an inclusive, open and integrated event welcoming all people regardless of their sexual or gender orientation, religion or race.”

The Limerick Pride LGBTQ Festival 2017 will be taking place starting on Monday, July 10 until Sunday, July 16 with the Parade on Saturday, July 15 and will feature a multitude of events from workshops, support meetings and discussions to evenings of music and club nights, to cater to the Pride needs of everyone.

Limerick LGBTQ Pride Secretary Lydia Doody said, “We want to make this year’s festival a celebration for everyone in Limerick. For that reason, almost all of the events have no charge and are open to every person who wants to attend. Strokers, Limerick’s gay bar is opening 7 nights during Pride to offer something different on every night of Pride.”

This year’s Pride will have an educational aspect. Support meetings will be held during the week for youth, adult and trans groups. GOSHH, 18 Davis Street will provide Rapid HIV testing at different points in the week. Call GOSHH at 061 314354 or email [email protected] for more information.

On Monday, July 10 Limerick Pride’s Official Launch will be held at McGettigans Pub at Limerick City Hotel from 6pm to 8pm with a DJ, a Stanza Poetry Performance and complimentary finger food. Also at the launch Christian Moretti, writer and LGBTQ Activist will be launching his new book ‘Glory is for the Vain, Fight is for the Brave’. The launch will be followed by a free BBQ and drinks reception at Brimstone Restaurant.

At 8 pm there is an LGBTQ Movie Screening in University Concert Hall Limerick, followed by a Lip Sync Battle in Strokers.

Friends of Pride, pictured at the launch of Limerick LGBT Pride 2017 at the Clayton Hotel. Limerick LGBTQ Pride Festival 2017 runs from July 10 – 16 with the Parade on July 15. Photo: Dolf Patijn/ilovelimerick.

On Wednesday, July 12 Print with Pride takes place at Limerick Printmakers Studio & Gallery in Johns Square from 6 pm to 7.30pm. This is a free event where you can bring along your t-shirts, jumpers, tote bags, or simply use some of the paper at the event, to create your own custom Limerick Pride Silk Screen art piece. This is followed by Drag Bingo Night in Strokers, which promises to be a great night for all.

On Thursday, July 13, Afternoon T for transgendered people and their friends takes place in Chez Le Fab at 3 pm.

That evening Madonna Lucia proudly presents her one-woman show ‘not safe for work’ at Dolan’s upstairs venue on Thursday, July 13th at 9pm sharp. ‘nsfw’ was a breakout hit at this year’s first ever Limerick Fringe Festival and has been updated especially for Pride week. Part autobiographical, part stand-up comedy and guaranteed to offend the show deals with body image and sex in the digital age. Adult content. Doors 8pm.

On Thursday night, Mezz Ladies Night kicks off in Chez Le Fab at 8.30pm and Strokers has a Karaoke Night at 10 pm.

On Friday, July 14, Drag-ON Youth Pride Party will be held in Lava Javas with GOSHH and Limerick Youth Service. All welcome ages 14 – 19yrs. Burst out a rainbow closet, stuff your face with rainbow cakes, dance the night away through glitter and bubbles, decorate your own Genderbread biscuit and paint your face in fabulosity.

That night the now traditional event ‘T’was the night before Pride’ will take place at Mickey Martins from 9pm-11.30pm. Running since 2008, Mickey Martins return for another year to host the pre-pride party with guest DJ’s and camp classics. This is a particularly special year as Mickey Martin’s and Smirnoff has come together to bring legendary act DJ Horse Meat Disco, who will be fresh off the boat from New York Pride in June, to Limerick Pride in July. T’was the night before Pride’ is taking pride to the next level this year thanks to Smirnoff and promises to be an epic night.

The annual Limerick LGBTQ Pride Parade on Saturday, July 15, will bring some extra colour and music to Limerick City Centre, gathering at City Hall at 1.30pm the Parade will make its way at 2.30pm sharp up O’Connell Street, across Mallow Street to Henry Street, past Arthurs Quay Park and returning to City Hall.

Then everyone will go to the Hunt Museum from 3pm to 6pm for PrideFest 2017, a showcase of local LGBT culture in Limerick in a lavish marquee in the museum gardens with your host Shyanne O’Shea and special guests Unity Gospel Choir Limerick, musical performances, drag performances and much more. Limerick legend, actor, director and playwright Myles Breen will be holding his annual Tea Dance, which for many is a highlight of the festival.

That night after Pridefest, X-Factor star Saara Aalto will headline the Limerick LGBTQ Pride Festival 2017 Climax Party at Dolans Warehouse with support from Limerick singer/songwriter Doreen Grimes. The evening will be hosted by well-known Limerick drag stars Sheila Fitzpatrick and Madonna Lucia and will feature performances from Dublin’s Paul Ryder and London’s Shyanne O’Shea. The event will feature 3 DJ’s with DJ Ruth on the main floor, DJ Jules in the Kasbah and Saved by the 90’s upstairs. Three rooms packed with colour, vibrancy and music for all. Doors open 9 pm and Saara takes to the stage at 11 pm sharp.

On Sunday, July 16, a Prideful Recovery Event will be held at GOSHH, 18 Davis Street from 1 pm – 5 pm. Come along to GOSHH on Davis Street, Limerick for some holistic therapies including Reiki, Tarot and Angel card readings. Donations welcome.

This years Limerick Pride Youth Party to be held July 14