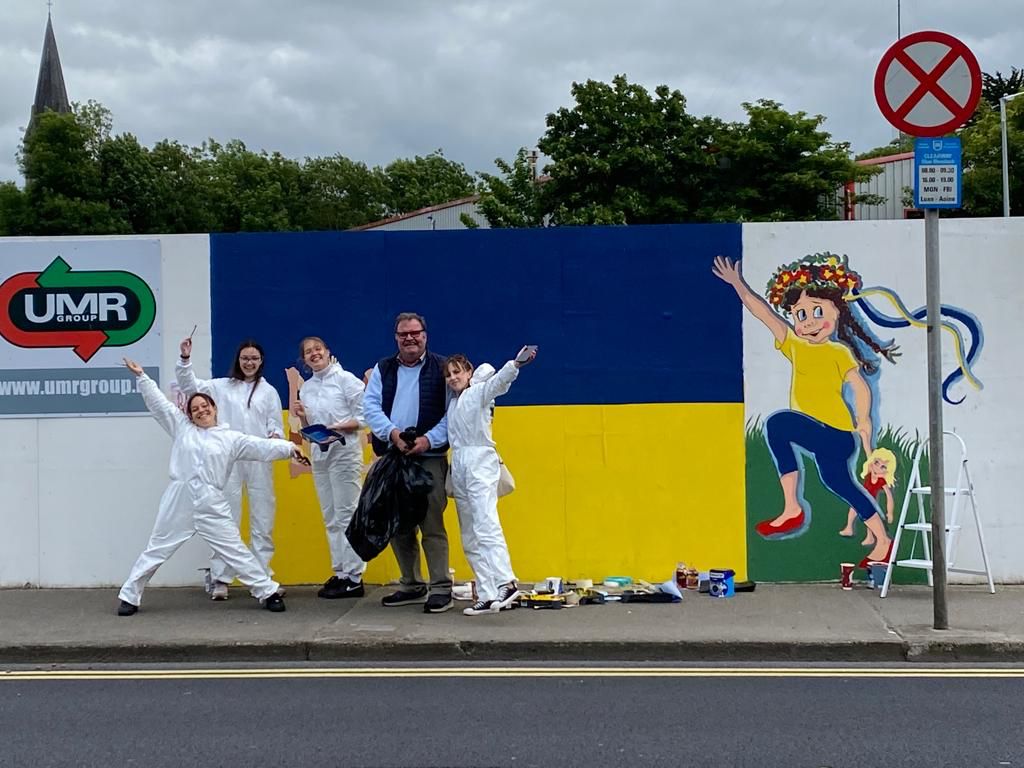 A Limerick Lidl Ukrainian Mural shares messages of hope and support for Ukraine while calling for peace in their home country.

The mural was led by Limerick Artist Una Heaton who got in contact with Ukrainian refugees staying in the Radisson Hotel.

Una has previously worked with Ukrainian refugees staying in hotels in Limerick, one project being two forty-foot banners decorated with Ukrainian symbols and messages of hope and peace for Easter Sunday.

The idea came to Una after she saw the hoarding being put in place by Lidl on the Dock Road. She got in contact with the head office of Lidl who kindly agreed to the idea of the mural.

From there, Una got the art materials together and met up with four Ukrainian ladies Lisa, Yana, Valda, and Maire outside Lidl on the day. There were paints, brushes, tape and all the essentials needed for the mural.

On the day of the mural, they received loads of support from people passing by, such as beeps of encouragement from drivers.

The design of the painting came from a proposed sketch of a girl wearing Ukrainian flag colours with the Ukrainian flag holding on to a teddy bear and underneath a message ‘Slava Ukraine’ meaning ‘Glory to Ukraine.’

For the mural, the design was updated and instead a large block of Ukrainian colours is located beside the girl. It is a powerful and visually striking message, located in a prime location in the city and is a reminder of what is still happening in Ukraine.

“Thanks to these amazing young resilient women in doing this gesture of art in support of a nation fighting for their right for freedom and democracy. Slava Ukraine,” Una commented on the painting.

To view some of Una Heatons’ works, go HERE