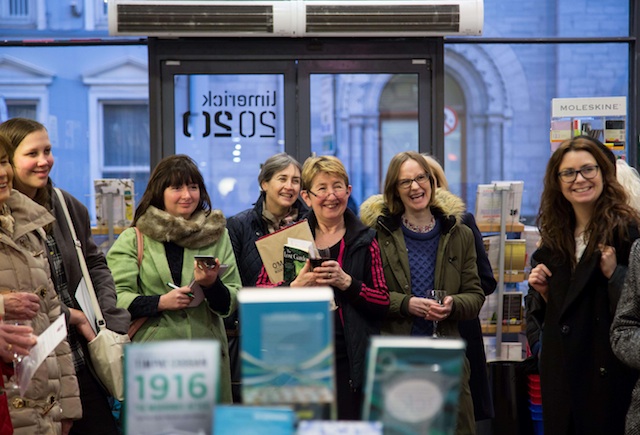 Limerick Literary Festival 2016 (formerly known as The Kate O’Brien Weekend), has been held annually since 1984 in honour of the life and works of the Limerick-born novelist and playwright Kate O’Brien.

For this year’s Limerick Literary Festival 2016, the theme of which is ‘Rebellion’ in keeping with the Centenary year of the Easter Rising, features author visits, readings, lectures and panel discussions at The Belltable, Limerick City Gallery of Art, the City Library (The Granary) and The Lime Tree Theatre in Limerick City.

The Limerick Literary Festival 2016 once again features the presentation of the annual Kate O’Brien Award to the best novel or short story collection by a debut Irish female writer.

“We are delighted to present a star studded line-up for the 32nd edition of the Limerick Literary Festival in honour of Kate O’Brien, the distinguished Limerick author,” commented Sheila Deegan, Limerick Arts Officer and Festival Committee member.

“Building on this significant history, the Limerick Literary Festival seeks now to promote Limerick nationally as a place of literary excellence and to provide a platform where readers can meet their favourite authors and other readers,” she said.

The Festival will officially be launched by memoirist and journalist Kevin Myers on Friday February 26th at 6.00 pm in Limerick City Gallery of Art, Pery Square. It will be followed by the ‘As Music and Splendour’ recital, which this year will feature internationally renowned soprano Claudia Boyle, accompanied by pianist Mairéad Hurley.

The official festival opening will be preceded on Thursday 25th February at 8p.m. with Kaleidoscope Night Concert in the Belltable, 69 O’Connell Street.  Earlier on Friday February 26th, in association with the City Library at The Granary, Limerick novelist Judi Curtin and short story author Mike Mac Domhnaill will host a free reading.

The Lime Tree Theatre will host journalist and novelist Tom Clonan on Sunday morning before a special event entitled Desert Island Books where well known Limerick author Donal Ryan and accomplished new Irish writer Sara Baume will reveal their choice of books including “The book I would never lend”. And for the finale, the illustrious Pauline Bewick will be in conversation with the popular critic and Editor Niall MacMonagle.

For a full listing of all events and booking details visit www.limerickliteraryfestival.com.
For more stories by I Love Limerick, click here.