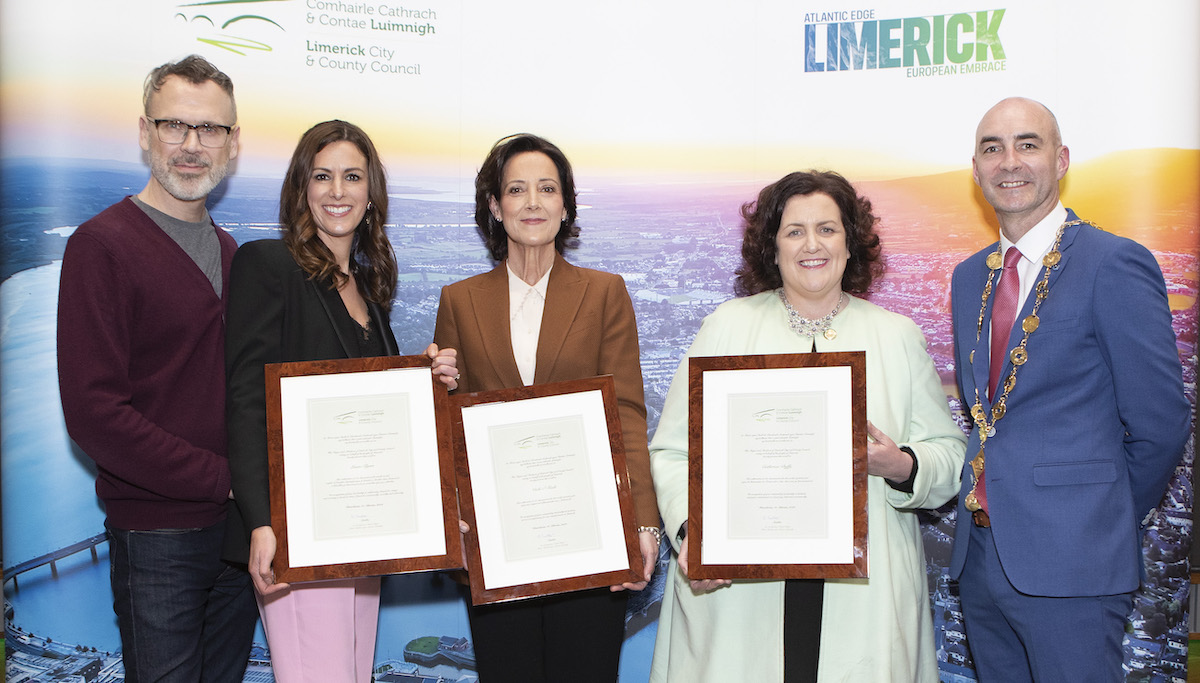 Catherine Duffy, Laura Ryan and Vicki O’Toole were honoured for their work in advancing Limerick across a number of different fields

Three exemplary Limerick businesswomen have been honoured with a Mayoral Reception for their commitment to advancing Limerick in various avenues.

Mayor of Limerick City and County, Cllr Daniel Butler, welcomed Catherine Duffy, Laura Ryan and Vicki O’Toole, along with their family and friends, to the Limerick Council chamber in Dooradoyle in celebration of their notable achievements across a number of different fields.

Northern Trust Limerick CEO Catherine Duffy was recognised for her outstanding leadership in business and commitment to advancing Limerick economically. The Dublin-born businesswoman came to Limerick in 2008 to lead a new branch of Northern Trust, and under her leadership, the company has become a major employer of university graduates here in Limerick.

Honouring Ms Duffy at the Limerick Mayoral Reception, Mayor Daniel Butler said, “Catherine came to Limerick fourteen years ago to manage nineteen people, and all of a sudden, that is 1,400 people. Northern Trust’s story in Ireland is one of absolute success and exponential growth, most notably here in Limerick.”

He continued, “When Catherine speaks, people listen, because what she says has value. She is an amazing advocate for Limerick and why people should come to work and live here. The people of Limerick value that.”

Mayor Butler praised Ms Ryan for portraying Limerick as a vibrant destination to live and work, saying, “Laura oversaw Limerick’s transition from having an image problem to possessing one of the finest branding images of a city not just in Ireland, but in Europe.

“At times, it was like trying to grab water in our hands, but after years of effort, that handful of water became a tsunami of renewed identity and self-worth. We can proudly state that ‘We are Limerick’ because of Laura’s work.”

Speaking at the ceremony, Ms Ryan reflected, “It was a very difficult time for Limerick back in 2008 when I took on a PR role with Limerick City and County Council. We were in a dark place and had huge crime and social problems. I knew it was going to be an uphill battle, but I love a challenge, and I really, really love this place that we all call home.

“I knew we had a lot going for us here – other people just didn’t know about it. There were a lot of people passionate about getting Limerick in the headlines for all the right reasons, and I was one of them.”

“Vicki’s story is one of great courage and resilience, which is what you need in this life and in the business world,” Mayor Butler said of Ms O’Toole.

“When Vicki became the company’s first managing director in 2008, she expanded its product range and offered more extensive packaging, a brave decision to make at that time. She set a standard straight off the bat.”

He continued, “Vicki manages the largest packaging company in Ireland, and that success is down to her courage, ability and driven sense of self, in addition to a passion for what she does and the people she works with.”

The I Love Limerick team extends huge congratulations to Catherine Duffy, Laura Ryan and Vicki O’Toole on this magnificent and well-deserved recognition.

For more information on business in Limerick, go HERE