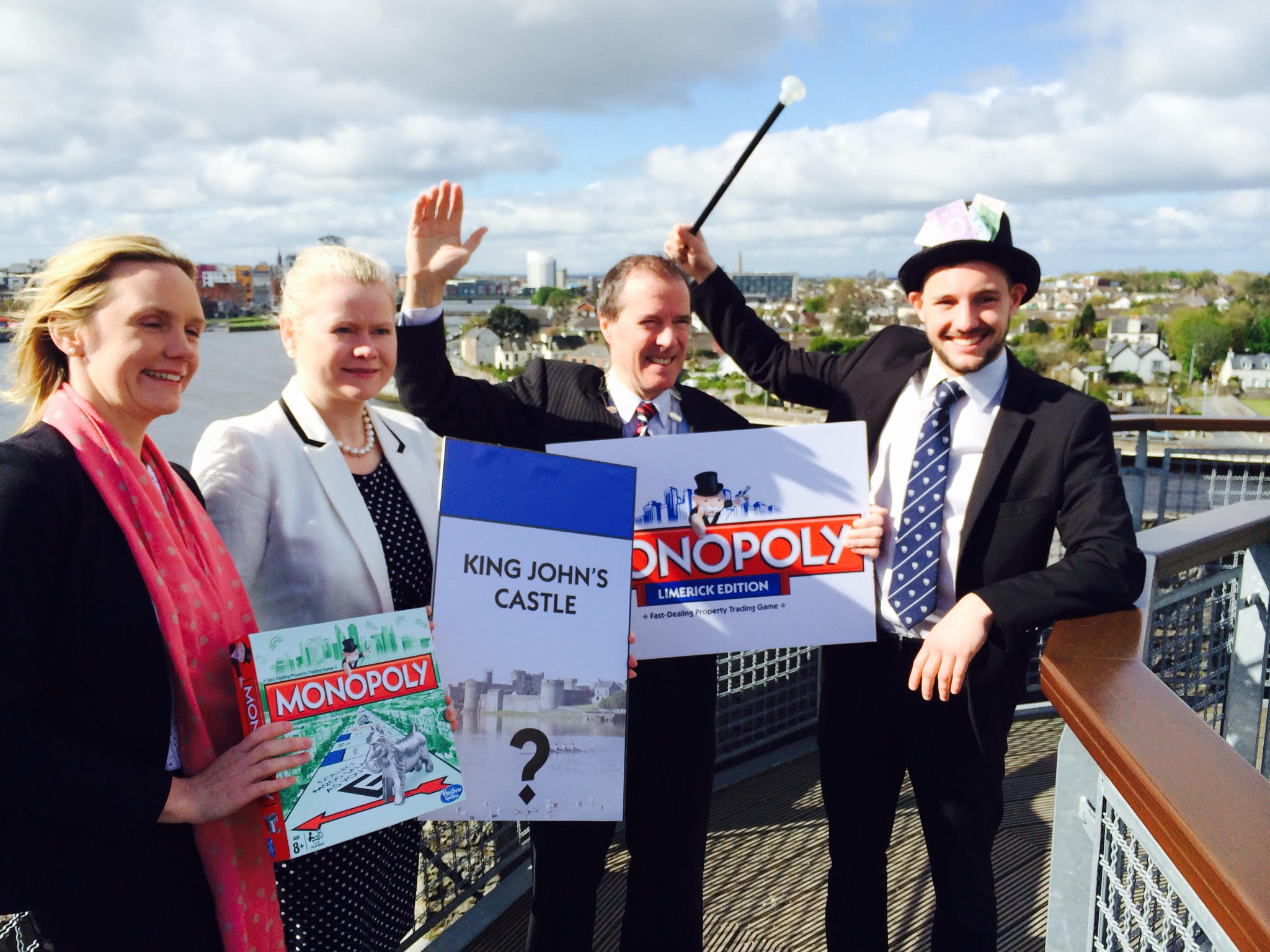 Limerick Monopoly Board to be Released

Limerick has beaten a host of regions across Ireland to get its very own official Monopoly board, which will be released in October 2016.

Games Executive Jake Houghton and a team of Monopoly personnel were joined by Deputy Mayor of the City and County of Limerick, Cllr Gerald Mitchell for the announcement at the top of King John’s Castle.

Mr Houghton said: “A big congratulations to Limerick for Passing GO. We looked at many parts of the island of Ireland but the Monopoly dice has landed on Limerick. The decision was based on a mixture of factors – beauty, vibrancy, great landmarks to fill the board and above all pride. There’s lots of that in Limerick. It’s brimming with civic pride. So very well done Limerick!

Limerick is currently in the running to be named the European Capital of Culture 2020 and win or lose one of the sets will be dedicated to ‘culture’ specifically.

Mr Houghton added: “The landmarks will be drawn from the world of culture, heritage, tourism, arts, leisure, media, local businesses, education and sport. They will appear in themed sets. Limerick has an abundance of great landmarks so we expect to be very happily spoilt for choice.”

The four train stations from the London original Monopoly edition will be handed over to a ‘travel’ theme. This will include trains, planes and automobiles as well as buses, trams, horses, rivers and everything that travels.

“The sets will be in ‘two’, ‘three’ and ‘four’. The board is a blank canvas at the moment and by October it will showcase and immortalise Limerick in all its rich vibrant glory. After that we have to put the board together and design it – as well as crucially select the landmarks to appear on it and in which position,” explained Mr Houghton.

Mr Houghton also revealed that as well as the themed property squares, Chance and Community Chest playing are being customised too. “One could send players to Cork instead of the Monopoly jail!” added Mr Houghton.

The Deputy Mayor of the City and County of Limerick, Cllr Gerald Mitchell, said he is delighted that Limerick is getting its own MONOPOLY board this October.

He said: “I’m a huge MONOPOLY fan and I can’t wait to see our local landmarks and internationally renowned tourist attractions feature in this special Limerick Edition which will showcase our wonderful city as we enter the closing stages to become European Capital of Culture 2020.

“I have no doubt that it will be incredibly popular and that it will fly off the shelves and be sent all around the world as it will launch just in time for the Christmas market.”

John Ruddle, Chief Executive of Shannon Heritage, said: “We are delighted to have been selected to host the announcement of Limerick’s official Monopoly board. “Monopoly is a global brand and for Limerick to have been chosen to have its own official board is a great boost to the region and one we are sure will be universally welcomed.”

Any organisation or landmark wishing to be on the board is urged to contact Mr Houghton at Winning Moves UK at: [email protected]

Winning Moves UK are the makers of this special board under license from Monopoly owners Hasbro.